Hachita, New Mexico, a ghost town in the Little Hatchet Mountains, got its start as a mining camp several miles west of town. 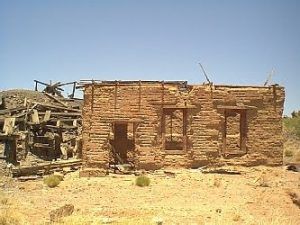 Remains of an ore crusher at the American Mine in Old Hachita, New Mexico. Photo by Lloyd Summer, courtesy Ghosts of the Southline.

The original town of Hachita was settled around 1875 when silver, lead, and copper were mined. The mountains supplied the camp with more than just silver and copper; it also supplied its name, Spanish for “little hatchet.”

The town grew to three hundred residents by 1884 and had steam smelting works, several saloons, two general stores, and several mining companies. Hachita began to dwindle in importance during the 1890s. Shortly after the turn of the century, railroad tracks were laid about nine miles east of Hachita. A railroad town sprang up and took the name of the fading mining camp. Thereafter, Hachita was the railroad town, and the original bearer of the name became Old Hachita.

During these early years, life at the settlement was harsh. Not only were residents dealing with the heat of the desert, but also the constant threat of Apache warriors’ attacks. However, it didn’t prevent them from creating several productive operations, including the Hornet, the King, and American mines.

A post office was established in 1882, and the town officially registered its name as Hachita. By 1884 Hachita had 300 residents, boasted steam smelting works, several mining company operations, a couple of general stores, and three saloons. However, its success would be short-lived as the ore played out, and by 1890 the population dropped to around 25. The post office held on for a  few more years before it was shuttered in 1898. 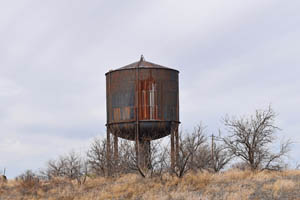 In 1902, when tracks were laid for the El Paso and Southwestern Railroad nine miles east of Hachita, another competing settlement sprang up, drawing people and businesses away from the original town and dividing residents between “Old Hachita” and “New Hachita.” A post office was established that same year in the new location, and quickly the new community grew with the addition of saloons, stores, and a hotel. The El Paso and Southwestern Rail line was one of two that met in Hachita, the other being the Lordsburg & Hachita Railroad. Old Hachita would continue to have mining operations until the 1920s but became a complete ghost town after silver prices dropped.

During the Mexican Revolution in the early 1900s, Mexico President Francisco Madero put pressure on Mormon communities in Northern Mexico. In August of 1912, about 800 residents of Colonia Diaz, some 80 miles south, fled the country and wound up in Hachita. Most of the refugees relocated with the help of the U.S. Government, and a handful stayed becoming permanent residents. 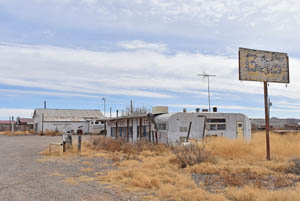 The new Hachita served as a base for forces during the “Punitive Expedition,” organized in retaliation of Pancho Villa’s raid on Columbus, New Mexico, in 1916. General John J. “Black Jack” Pershing led two columns that included infantry, cavalry, field artillery, and signal detachments from both Columbus and Hachita in their hunt in northern Mexico for Pancho Villa and his men. The U.S. established Camp Shannon at Hashita that housed over 400 troops. The town benefited from the additional revenue from the military until the camp was closed in 1922.

In 1917 Hachita gained an outlaw when William E. Walters, also known as Bill Anderson, Billy Brown, and Bronco Bill, moved here after getting an early release from prison.  Walters, a cowboy, and later a bandit, at one time, rode with the Black Jack Ketchum Gang.  After being convicted of train robbery and sentenced to life, he was let out early for some reason. After moving to Hachita, Walters worked as a wrangler for the Diamond A Cattle Company.  He died after falling from a windmill tower he was working on.

At its peak in 1920, Hachita had over 750 residents. In the 1930s, the Works Progress Administration built schoolhouses in Hachita. In 1934, the Lordsburg and Hachita Railroad stopped service, dealing a blow to the community. Although there was a slight resurgence during World War II as precious metal prices rose, improvements to highways after the war drastically reduced rail freight and passenger service. 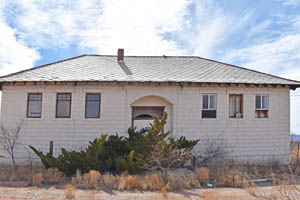 Though smaller in operation, the El Paso and Southwestern Railroad continued until the last train passed through town in 1961. By 1970 Hachita only had around 30 residents.

That decade, Daniel Suozzi, a retired businessman from Buffalo, New York, bought the building that had once housed the high school. In the next years, he remodeled the structure into a church and searched for treasures to include in his masterpiece. He built a 45-foot bell tower where he installed two 800 pound solid bronze bells that had been cast in 1902.

The beautiful stations of the cross were crafted in Germany in 1830, are made of hand-cast plaster and hand-painted, each weighing about 150 pounds. Wrought iron lamps hung from the ceiling, and the confessional and altars were of beautiful quality. After years of work, the church was dedicated, and the first mass was celebrated in December 1982. Suozzi named it Saint Catherine of Sienna in honor of his mother’s patron saint. In the next decades, the church served the people of the area, but unfortunately, it was abandoned due to the declining population. 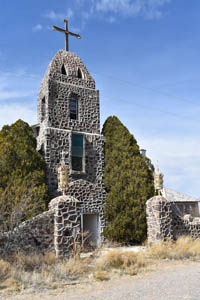 Today, the streets of Hachita are unpaved, and the majority of the buildings are unused and deteriorating. However, it still shows some life, as it retains a post office and a convenience store/gas station, and a handful of residents.

At the original settlement of Old Hachita, visitors can still find an old headframe and crumbling adobe buildings.

Primarily a ranching community, Hachita is located on New Mexico Highway 9, about 44 miles west of Columbus. Old Hachita ruins can be found 9 miles further west, south on an unpaved, unnamed road off highway 9. The website Ghosts of the Southline has a Google Map for reference.