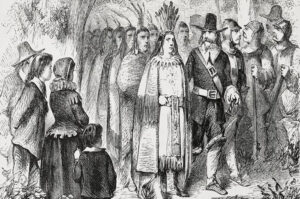 The Nauset people, sometimes referred to as the Cape Cod Indians, were a Native American tribe who lived in Cape Cod, Massachusetts. Of the Algonquian linguistic group, they lived east of Bass River on lands occupied by their closely-related neighbors, the Wampanoag.

Although the Nauset were a distinct tribe, they were often subject to the Wampanoag rule. They shared with them many similar aspects of culture, agricultural practices, and a common language. Living along the Atlantic Ocean, they relied heavily on seafood. They also did some farming, growing maize, corn, and beans.

Shortly after Christopher Columbus voyaged to the New World in 1492, a steady stream of European explorers, fishermen and adventurers began regular visits to the coast of New England. Located on Cape Cod, the Nauset had contact with Europeans at an early date, but these first meetings were not always friendly.

French explorer and navigator Samuel Champlain visited the Nauset and Monomoy bands during his two visits to Cape Cod in the early 1600s. In 1614, Captain Thomas Hunt carried off seven Nauset natives and sold them into slavery in Spain along with 20 Indians of the Patuxent tribe. The Spaniards also introduced diseases that reduced the Nauset population even before the colonization of New England began on a large scale.

The Pilgrims‘ first contact with the Nauset was during the Mayflower’s landing near present-day Provincetown, Massachusetts, in 1620. They discovered a deserted village when the tribe was away at their winter hunting grounds. Desperately low on supplies, the Pilgrims helped themselves to maize, though they left a note promising to pay for what they had stolen. The promise was eventually kept when the Nauset, led by Chief Aspinet, returned months later. The Nauset also returned a small boy who had wandered away from the colony and become lost, an act which significantly improved relations with nearby colonists. A warm friendship developed between the Pilgrims and Nauset, and during the winter of 1622, Aspinet is believed to have brought food to Plymouth, which saved many from starvation.

The Nauset were never numerous. The original population was probably around 1,500 in 1600 before the epidemics. Their estimated population in 1621 was 500, but this is probably below their real strength at that time, as they seem to have numbered as many as 800 afterward.

In subsequent years, the Nauset became the colonists’ closest allies. Most became Christianized and aided the colonists as scouts and warriors against the Wampanoag during King Philip’s War. Their numbers, always small, were further reduced. After the war, they intermarried with neighboring tribes and settlers. 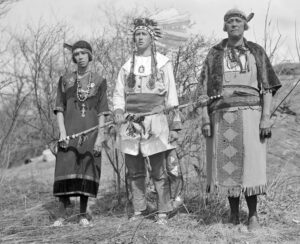 In 1764 they had decreased to 106, living mainly at Potanumaquut, but in 1802 only four were said to remain. Their principal village, Nauset, was near the present Eastham, Massachusetts.

Through the years, one Nauset community was at Mashpee and became associated with the Wampanoag, although many of its members are descendants of the Nauset. The current population is about 1,100.