On May 16, 1863, at about 7:00 am, the Union forces engaged the Confederates, and the Battle of Champion Hill began. Pemberton’s force drew up into a defensive line along a crest of a ridge overlooking Jackson Creek. Pemberton was unaware that one Union column was moving along the Jackson Road against his unprotected left flank. For protection, Pemberton posted Brigadier General Stephen D. Lee’s men atop Champion Hill where they could watch for the reported Union column moving to the crossroads. Lee spotted the Union troops at about the same time that they also saw him. If this force was not stopped, it would cut the Rebels off from their Vicksburg base. Pemberton received a warning of the Union movement and sent troops to his left flank. Union forces at the Champion House moved into action and set up artillery to begin firing.

When Grant arrived at Champion Hill, around 10:00 am, he ordered the attack to begin. By 11:30 am, Union forces had reached the Confederate main line, and about 1:00 pm, they took the crest while the Rebels retired in disorder. The Federals swept forward, capturing the crossroads and closing the Jackson Road escape route. One of Pemberton’s divisions then counterattacked, pushing the Federals back beyond the Champion Hill crest before their surge came to a halt. Grant then counterattacked, committing forces that had just arrived from Clinton by way of Bolton. Pemberton’s men could not stand up to this assault, so he ordered his men from the field to the one escape route still open: the Raymond-Edwards Road crossing of Bakers Creek. Brigadier General Lloyd Tilghman’s brigade formed the rearguard, and they held at all costs, including the loss of Tilghman. In the late afternoon, Union troops seized the Bakers Creek Bridge, and by midnight, they occupied Edwards Station. The Confederates were in full retreat towards Vicksburg. If the Union forces caught these Rebels, they would destroy them. The Union victory resulted in estimated casualties of 2,457 Union and 4,300 Confederate.  More … 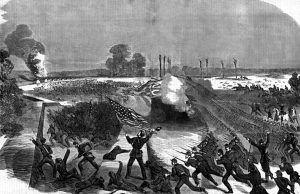 Big Black River Bridge (May 17, 1863) – Taking place in Hinds and Warren Counties, this conflict is also referred to simply as the Battle of Big Black. The battle was led by Union Major General John A. McClernand and Confederate Brigadier General John S. Bowen. Reeling from their defeat at Champion Hill, the Confederates reached the Big Black River Bridge the night of May 16-17. Confederate Lieutenant General John C. Pemberton ordered Brigadier General John S. Bowen, with three brigades, to man the fortifications on the east bank of the river and impeded any Union pursuit. In the meantime, three divisions of Union Major General John A. McClernand’s XIII Army Corps moved out from Edwards Station on the morning of the 17th.

The corps encountered the Confederates behind breastworks and took cover as enemy artillery began firing. Union Brigadier General Michael K. Lawler formed his 2nd Brigade, Carr’s Division, which surged across the Confederate forces’ front and into the enemy’s breastworks, held by Vaughn’s East Tennessee Brigade. Confused and panicked, the Rebels began to withdraw across the Big Black River on two bridges: the railroad bridge and the steamboat dock moored across the river. As soon as they had crossed, the Confederates set fire to the bridges, preventing close Union pursuit. The fleeing Confederates who arrived in Vicksburg later that day were disorganized. The Union forces captured approximately 1,800 troops at the Big Black River, a loss that the Confederates could ill-afford. This battle sealed Vicksburg’s fate as the Confederate force was bottled up at Vicksburg. The battle resulted in an estimated 273 Union casualties and 2,000 Confederate. 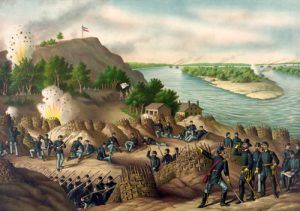 Siege of Vicksburg (May 18-July 4, 1863) – Under Union Major General Ulysses S. Grant and Confederate Lieutenant General John C. Pemberton, this prolonged battle is considered as one of the major turning points of the Civil War. On May 18th Union Major General Ulysses S. Grant and his Army of the Tennessee crossed the Mississippi River and converged on Vicksburg. In a series of maneuvers, they drove the Confederate army of Lieutenant General John C. Pemberton into defensive lines surrounding the fortress city. Two major assaults, on May 19 and May 22, 1863, against the Confederate fortifications were repulsed with heavy casualties. However, when Grant began to besiege the city again on May 25th, the Confederates began to flail. With no reinforcements and their supplies dwindling, the Rebels were able to hold out for more than 40 days but were finally forced to surrender on July 4, 1863.

This action, combined with Port Hudson’s capture, Louisiana five days later, yielded command of the Mississippi River to the Union forces, who would hold it for the rest of the Civil War. The Battle of Vicksburg was the culmination of one of the most brilliant military campaigns of the war. With Pemberton’s army’s loss and this vital stronghold on the Mississippi River, the Confederacy was effectively split in half. Grant’s successes in the West boosted his reputation, leading ultimately to his appointment as General-in-Chief of the Union armies. The victory also cut off communication with Confederate forces in the Trans-Mississippi Department for the remainder of the war. Because of the siege and surrender, Vicksburg’s city would not celebrate Independence Day for about 80 years. The battle losses were large, with an estimated 4,825 Union casualties and 32,697 Confederate, 29,495 of whom surrendered. In addition to his surrendered men, Pemberton turned over to Grant 172 cannons and 50,000 rifles. 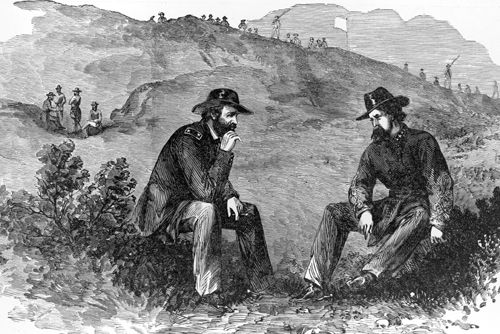 While the Siege of Vicksburg was taking place, three other lesser battles of the campaign took place at Milliken’s Bend, Louisiana on June 7th; Goodrich’s Landing, Louisiana on June 29-30th; and at Helena, Arkansas on July 4th. After Vicksburg’s surrender, President Abraham Lincoln famously announced, “The Father of Waters again goes unvexed to the sea.” Grant’s full campaign from March through July 1863 resulted in 10,142 Union and 9,091 Confederate killed and wounded.