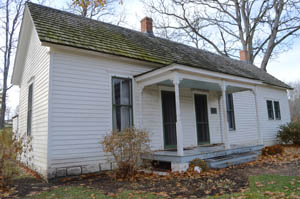 After Frank James died, Robert Franklin, his son, kept the house reasonably intact, but by 1978 it had fallen into disrepair and was quickly being overtaken by the elements. Clay County, Missouri, purchased the home from Jesse’s grandchildren, and the restoration work was begun. By the following summer, visitors were once again going through the farm.

Today, the house looks much as it did more than a century ago. A few feet from the house is the grave where Jesse James was first was buried to discourage grave robbers. In 1902, he was re-interred next to his wife in Mount Olivet Cemetery in Kearney, Missouri.

Guided tours of the house leave every half-hour from the nearby visitors’ center, itself a mini-museum with artifacts and mementos, including family photographs, Jesse James’ last pair of boots, his last cartridge belt, a harness, and the feather duster he was supposedly holding when he was killed. A short film offers a quick introduction to the James brothers and their gang.

Each year, about 18,000 people visit the farm in the suburban Kansas City town, and huge annual festivals lure James enthusiasts from across the country.

The James Farm is located at 21216 James Farm Road in Kearney, Missouri. 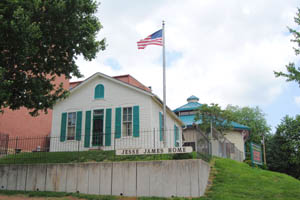 Another 25,000 people pass through the Jesse James Home about 35 miles away in St. Joseph, Missouri, where Robert Ford shot James from behind.

Today the James Home is a museum dealing with the life and death of Jesse James.  Artifacts from the grave are now on display, including the coffin handles, a small tie pin Jesse James was wearing the day he was killed; a bullet removed from his right lung area; and a casting of his skull, showing the bullet hole behind his right ear.

The Pony Express Historical Association operates the Jesse James Museum with all proceeds from admission charges to help maintain both the James Home and Patee House Museum.

However, the premier attraction is the so-called “bullet hole,” which is now nearly one-foot wide because tourists have chipped away at it. The museum eventually put a protective frame over it. However, the hole may not be from the bullet since some experts believe it never exited Jesse James’ head. 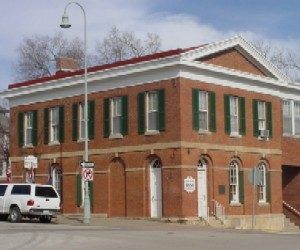 The Jesse James Bank Museum is located on the Historic Square in Liberty, Missouri. Visitors step back in time to 1866 with period furnishings and an account of that fateful February 13th as they peer into the original bank vault, view photographs, and listen to the exploits attributed to the James Gang.

The museum is located at 103 N. Water in Liberty, Missouri. 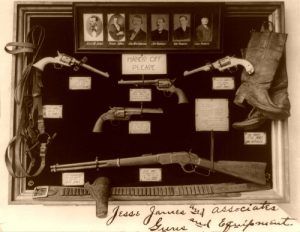 Quantrill – The Man, the Myth, the Soldier