In July of 2016, we escaped the steamy heat of Missouri and headed north for a Minnesota adventure.  Fort Snelling was one of our favorite stops. 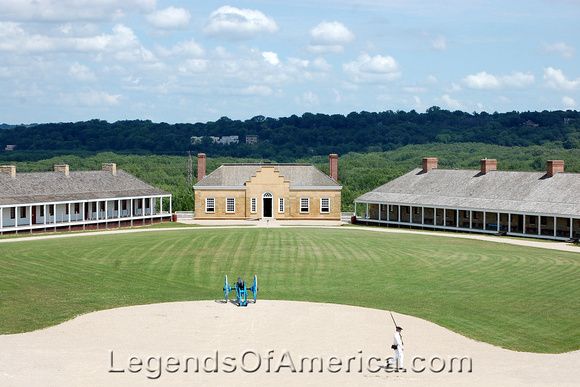 The area where Fort Snelling was built has been inhabited between 9,000 – 12,000 years by people who were likely following herds of game animals. Approximately 1,000 years ago, people living here at the confluence of the Minnesota and Mississippi Rivers using the waterways for transportation, food, and to develop an extensive trade relationship with other native peoples. By the 1600s there were two main groups of people living in present-day Minnesota, the Dakota and the Ojibwe. The river confluence was believed to be the place of origin and center of the earth by the bands of Mde-wa-kan-ton-wan Dakota, the “Dwellers by Mystic Lake.” By the end of the 1600s Europeans had arrived in the region and began a long and complex relationship with the American Indians.

For nearly 200 years after Europeans arrived in the region. The site was also the crossroads of two major river highways of the fur trade, where traders exchanged manufactured goods with American Indian nations for valuable furs. Following the American Revolution, the U.S. competed fiercely with Great Britain for dominance of the North American fur trade. 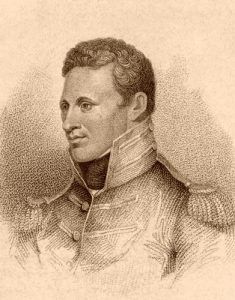 In the 1805 Treaty of St. Peters, Lieutenant Zebulon Pike acquired 100,000 acres of land from the Sioux for the purposes of establishing military posts. Better known as Pike’s Purchase, this paved the way for significant settlement.

Following the War of 1812, the United States Department of War built a chain of forts and installed Indian agents between Lake Michigan and the Missouri River. These forts primarily protected the northwestern territories from Canadian and British encroachment. The government also install Indian agents, whose goals were to promote and protect the interests of the United States in the region’s fur trade and to gain the friendship and cooperation of American Indian communities.

The Army founded Fort Saint Anthony in 1819 on the bluff above the Minnesota and Mississippi Rivers to control the exploration, trade, and settlement on these waterways. Led by Colonel Josiah Snelling, commanding the 5th Infantry Regiment, the fort was constructed between 1820 to 1824. During construction, most soldiers lived at Camp Coldwater, which provided drinking water to the fort throughout the 19th century. Upon its completion in 1825, the Army renamed the fort as Fort Snelling in honor of its commander and architect. Colonel Snelling suffered from chronic dysentery and bouts of the illness made him susceptible to anger. In September 1827 he was recalled to Washington and in the summer of 1828 he died from complications due to dysentery and a “brain fever”.

The soldiers at the northwestern frontier outposts tried to restrict commercial use of the rivers to only United States citizens, kept American Indian lands free of white settlement until treaties permitted it, enforced law and order, and protected legitimate travelers and traders. At Fort Snelling, the garrison also attempted to keep the peace between the Ojibwe and Dakota Sioux tribes.

By the 1840s the fur trade had declined dramatically in the Minnesota region, partially due to changes in fashion tastes, the availability of less-expensive materials for hat-making, and because Dakota and Ojibwe hunters had their available hunting grounds reduced through treaties with the U.S. government. Many fur traders took the opportunity to become land speculators, and economics in the region changed forever. For many Dakota and Ojibwe people, who had by this time become increasingly dependent on the trade, exchanging land in order to pay off debts claimed by traders became a matter of survival. 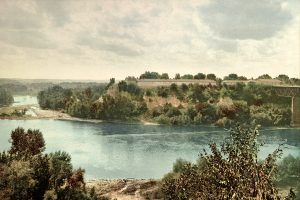 As the towns of Minneapolis and Saint Paul, Minnesota were developed in this area and increased in population, there was less need for a forward frontier military post in the region. The Army sold Fort Snelling, including 8000 acres later annexed into south Minneapolis, to Franklin Steele in 1858 for $90,000.

During the Civil War, Franklin Steele leased Fort Snelling back to the War Department for use as an induction station. More than 24,000 recruits from Minnesota were trained here. During the Dakota War of 1862, the Army used it as the base of a concentration camp, holding hundreds of Dakota women, children, and elders as captives on the river flats below the fort through the winter of 1862–63. Hundreds died there. After the war, Steele leased the land around Fort Snelling to settlers, and Minneapolis began to expand into the fort’s surroundings.

The United States Army assigned a garrison to Fort Snelling. The fort dispatched forces to protect the interests of the colonizers on the frontier from the Dakota people, westward to the Rocky Mountains. Soldiers from Fort Snelling. Soldiers from the fort fought in the Indian Wars and the Spanish–American War of 1898.

Through World War II, the War Department chose Fort Snelling as the location for the Military Intelligence Service Language School to teach the Japanese language to Army personnel. The War Department constructed a number of buildings for housing and teaching, and the school processed 300,000 soldiers. The school was relocated to Monterey, California after the war, in June 1946. 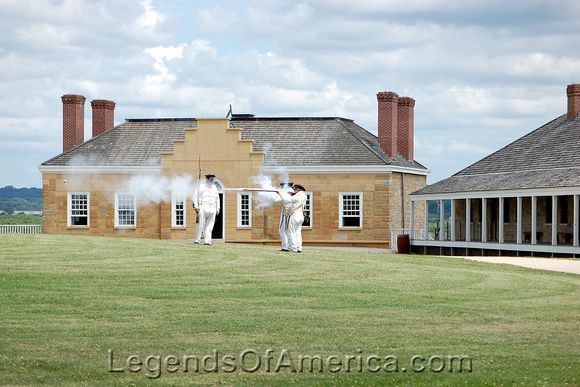 The War Department decommissioned Fort Snelling on October 14, 1946, and various federal agencies took parcels from the grounds of the old fort. The majority of the structures fell into disrepair. In 1960, it was listed as a National Historic Landmark, citing its importance as the first major military post in the region, and for its later history in the development of the United States Army.

Though decommissioned, Fort Snelling continued to serve as headquarters of the United States Army Reserve 205th Infantry Brigade and supporting units throughout the Upper Midwest. The Defense Department deactivated this role in 1994. Over the decades, the Army interred many deceased Minnesotan soldiers and other members of the United States Armed Forces at Fort Snelling National Cemetery. Some military facilities continue to operate around old Fort Snelling. 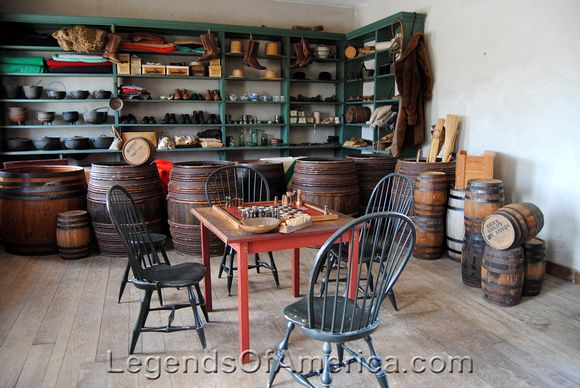 Fort Snelling served the U.S. military for more than 120 years, through conflicts at home and abroad, and thousands of Minnesotans received their first taste of military service within its walls. Today the fort is a National Historic Landmark and has been named a “national treasure” by the National Trust for Historic Preservation. 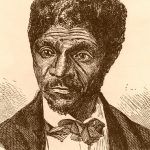 Dred Scott met his wife Harriet at Fort Snelling as a slave owned by Dr. John Emerson, despite the fort being in free territory. The Scott’s would later sue for freedom based on that, and the rejection by the U.S. Supreme court in 1857 (known as the Dred Scott Decision), would further divide the nation leading up to the Civil War.