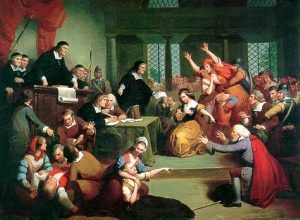 Sarah Churchill accused her employer George Jacobs, Sr. of witchcraft. He was found guilty and hanged on July 19, 1692. His trial by T.H. Matteson.

Sarah Churchill (or Churchwell) (1667?-after 1731) – Known as one of the “afflicted girls” during the Salem witch hysteria, Sarah was both an accuser and a confessor. Born to Arthur and Eleanor Churchill, a wealthy couple of English gentry, in about 1667, she spent her early childhood in Saco, Maine. In 1680, when Sarah was a young girl, Wabanaki Indians attacked Saco. The attack scared the Churchill family into moving to Marblehead, Massachusetts. While the fate of Sarah’s mother, Eleanor, is unknown, her father Arthur lived until 1710. By 1692 Sarah had moved to Salem Village and was working for George Jacobs Sr., who was a crippled old man living on his prosperous farm near Salem Village. By hiring herself out as a servant, Sarah went from being the granddaughter of one of the wealthiest and socially prominent men in Maine (Major Phillips) to a low-status maidservant for a country farmer.

When the witchcraft crisis broke out in Salem Village, Sarah was 25 years old. She was related to the 18-year-old Mary Walcott, the cousin of Ann Putnam Jr., and thereby in a position to become acquainted with the other young accusers in the village. When Sarah’s symptoms of “affliction” declined, the other afflicted girls accused her of signing the Devil’s book to avoid torture.

In response, Sarah confessed that her master George Jacobs Sr. and his granddaughter, Margaret Jacobs, forced her to sign the Devil’s book. In order to save herself, Churchill also implicated Abigail Williams, Ann Putnam Jr., Mercy Lewis, Elizabeth Hubbard, Mary Walcott, Sarah Bibber, Mary Warren, Joseph Flint, Thomas Putnam, John Putnam, Jr., and John DeRich. Sarah’s confession saved her from the gallows. Later, she married a weaver, Edward Andrews, in 1709 in Maine, after being fined for premarital fornication. The last record of Sarah Churchill is dated 1731. 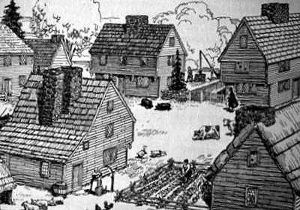 Elizabeth Hubbard (1675?-??) – Seventeen-year-old Elizabeth Hubbard followed suit after Elizabeth Parris, Abigail Williams, and Ann Putnam Jr., also claiming to have been bewitched. Like many of the other “afflicted” girls in Salem Village, she was an orphan and lived with her great-aunt and uncle, Dr. William Griggs, who had diagnosed the original girls as being under the affliction of an “Evil Hand”. As a physician, Dr. Griggs and his wife were viewed as a family of social standing. However, Elizabeth was known by the locals to be a servant to the household, rather than an adopted daughter. Playing a leading part in the accusations against the “witches” throughout the summer and fall of 1692, her afflictions, fits, trances, and testimony contributed to the conviction and execution of many.

Several witnesses came forward and testified against Elizabeth’s character, stating that she was a religious deviant, a girl with a vivid and powerful imagination, was known to speak untruths, and often denied the Sabbath day. However, statements such as these did not discredit Elizabeth as a truthful witness to the court. She continued throughout the entire trials to be a leading accuser. By the end of the trials, Elizabeth Hubbard had testified against 29 people, 17 of whom were arrested, 13 were hanged and two died in jail.

Nothing is known of what happened to Elizabeth Hubbard after the trials were over.

Mercy Lewis (1675-??) – Born in Falmouth, Maine in 1675, Mercy Lewis lost both her parents in an Indian attack by Wabanaki Indians and became an orphan at a young age. The orphaned Mercy was sent to live as a servant with Reverend George Burroughs, who had earlier lived in Salem. However, sometime later, she was sent to live with the Thomas Putnam, Jr. family in Salem Village, with whom she was distantly related.

At the Putnam household, Lewis befriended Ann Putnam Jr. and her cousin Mary Walcott who were among the first to make claims of affliction by specters of witches. Mercy would become one of the most consistent and vocal accusers during the 1692 witchcraft trials in Salem. From her previous experience, Mercy was the chief source of information about Reverend George Burroughs and the Hobbs family in Maine. It suspiciously appears that the afflicted girls seemed to have entered into something of a conspiracy as time went on, so that in the case of Reverend Burroughs, Ann Putman initiated an accusation against him. Mercy was also responsible for preventing Mary Eastey from being freed when all other accusations had been withdrawn.

After the trials, Mercy was said to have given birth to an illegitimate child. Long after the trials, when folk discussed the afflicted girls, Mercy would be used as an example to discredit them and suggest they were nothing more than trollops looking for attention.

Elizabeth “Betty” Parris (1682-1760) – The first person in Salem to claim illness due to being “bewitched”, Betty was born on November 28, 1682, to Salem Village Minister Samuel Parris and his wife Elizabeth. During the winter of 1691, Elizabeth Parris and her cousin, Abigail Williams, began to undertake experiments in fortune-telling, mostly focusing on their future social status and potential husbands. They were quick to share their game with other young girls in the area, even though the practice of fortune-telling, was regarded as demonic activity. By January 1692, Nine-year-old Betty appeared to be consumed with a secret preoccupation and was forgetting errands and unable to concentrate. She then began to act in strange ways, barking like a dog when her father would rebuke her, screaming wildly when she heard the “Our Father” prayer and once hurled a Bible across the room. After these episodes, she sobbed distractedly and spoke of being damned, perhaps because of her practice of “fortune-telling.” The Reverend Samuel Parris believed that prayer could cure her odd behavior, but his efforts were ineffective. In fact, her actions got worse. Soon, she was contorting her body into odd postures, consistently spouting foolish and ridiculous speeches, and generally having fits.

The Reverend John Hale, who was the pastor at the nearby parish of Beverly, would describe the afflictions of the girls as appearing as if they “were bitten and pinched by invisible agents; their arms, necks, and backs turned this way and that way, and returned back again, so as it was impossible for them to do of themselves, and beyond the power of Epileptic fits, or natural disease to effect. Sometimes they were taken dumb, their mouths stopped, their throats choked, their limbs wracked and tormented so as might move a heart of stone to sympathize with them.”

The local physician, William Griggs, diagnosed Elizabeth Parris as being afflicted by the “Evil Hand,” commonly known as witchcraft. Reverend Samuel Parris thought it was “a very sore rebuke and humbling providence that the Lord ordered the horrid calamity to break out first in his family.”

Since the sufferers of witchcraft were believed to be the victims of a crime, the community set out to find the perpetrators. On February 29, 1692, under intense adult questioning, the afflicted girls named Sarah Good, Sarah Osborne, and Tituba as their tormentors. Shortly after, the Salem witch trials began, with more and more girls accusing neighbors of witchcraft. 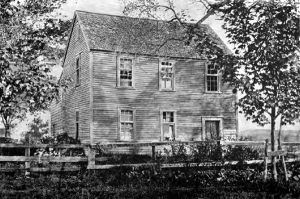 Betty Parris testified at trial that she was tormented by spectral visions of these women and would cry out when the accused moved her arms, legs, or head as if the accused was injuring her from across the room. She was also involved in the conviction of Martha Corey.

Understandably, Mrs. Parris was worried about the health of her daughter and she protested against using her as a witchfinder. At the end of March, Betty and Abigail were sent to live with Samuel Parris’ distant cousin, Stephen Sewall, in Salem. The move seemingly stopped both of their symptoms

Once the trials were over, Betty Parris would later marry Benjamin Baron, a yeoman, trader, and shoemaker, in Sudbury. Leading a very ordinary existence, the couple had four children. She survived her husband by six years, dying in her home in Concord on March 21, 1760.