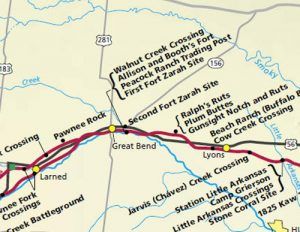 Beyond Plum Buttes in Rice County, the Santa Fe Trail continues west into Barton County, Kansas. At a distance of about five miles, the Santa Fe Trail comes to the Big Bend of the Arkansas River in southwest Ellinwood, Kansas. Here, once sat a large campsite, as well as a burial ground for many of those who had died along the journey. Unfortunately, their graves were never marked.

Following the river, the trail reached Walnut Creek Crossing about two miles east of Great Bend. The crossing once included a trading ranch, a toll bridge, and a military post. The trading post, a large log building, was established by William Allison and Francis Boothe in the summer of 1855. Called the Walnut Creek Ranch, it was the first time a non-military building erected west of Council Grove. 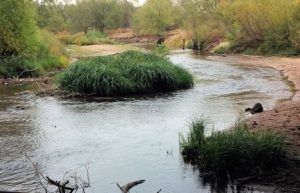 In the succeeding years, the trading post had several owners. In September 1857, Francis Boothe was murdered by a Mexican and two years later, in April 1859, Allison traveled to Missouri and while there, died of heart failure. It was next owned by George Peacock of Independence, Missouri. He was killed in September 1860 by a Kiowa Chief named Satank. Shortly after Peacock’s death, the post was taken over by Charles Rath, a well-known buffalo hunter, who operated the post until 1867. It was then taken over by a man named Joseph W. Douglas until the store was burned down on May 19, 1868, by Arapaho and Cheyenne Indians. 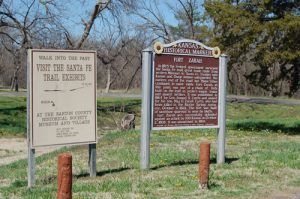 When the creek flooded, wagon trains would camp on its banks for days waiting to cross. It was one of the first streams in the region to have a toll bridge.

The Walnut Creek Crossing is about two miles east of Great Bend and south of US Highway 56. The trading post was about 100 yards from the crossing of Walnut Creek, on the east side of the creek and the north of the Santa Fe Trail. Today, only the foundations remain.

The trail then passed by the site of Fort Zarah, which was composed of a large stone building with quarters for officers and troops, kitchens, mess halls, storerooms and other functions. This post was abandoned in 1869 when it was felt that the Indian threat was not sufficient to warrant a second post so close to Fort Larned. The site is located on the north side of US Highway 56, just east of Great Bend in a roadside park. 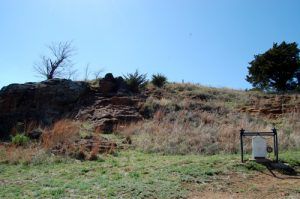 From here the trail rounded the north or great bend of the Arkansas River, turning southwest near the present-day town of Great Bend, and passing out of the county close to the famous “Rock Point,” afterward known as “Pawnee Rock.”

One of the best known natural features along the Santa Fe Trail in Kansas, Pawnee Rock is an outcropping of Dakota sandstone, named for a battle with the Pawnee Indians. During the trail days, the rock was nearly 30 feet higher than it is today and many travelers carved their names into the sandstone. Over the years, however, large amounts of rock were removed for the railroad and home construction. However, visitors can still enjoy panoramic views across the prairie from this relatively high landmark. Today, it is a Kansas State Historic Site located ½ north of US Highway 56 on the north edge of the town of Pawnee Rock, Kansas.

“After leaving Pawnee Rock, the fear of the Indians  was with us day and night…and when we reached Fort Mackey (Fort Atkinson) on the Arkansas River, we breathed a sigh of relief.”

— Marian Russell, near what would become  Fort Dodge, 1852