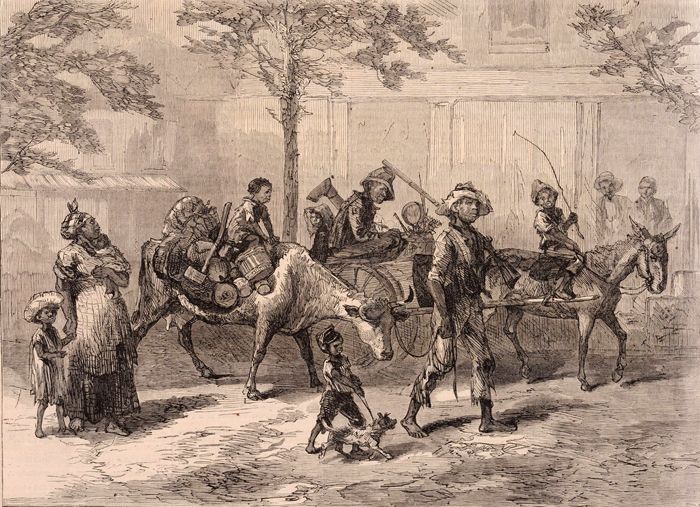 “I am anxious to reach your state … because of the sacredness of her soil washed by the blood of humanitarians for the cause of freedom.”

Nicodemus, Kansas, is the only remaining western community established by African Americans after the Civil War. Having an important role in American History, the town symbolizes the pioneering spirit of these ex-slaves who fled the war-torn South in search of “real” freedom and a chance to restart their lives. This semi “ghost town” has since gained recognition as a National Historic Site.

In the late 1870s, the black population of the South was extremely restless, as the Reconstruction following the Civil War failed to bring long-awaited freedom, equality, and prosperity.  Instead, they were racially oppressed, poverty-stricken, debt-ridden, and starving.

At this time, along came a white man named W.R. Hill, who described a “Promise Land” in Kansas to black families in the backwoods of Kentucky and Tennessee. Hill told of a sparsely settled territory with abundant wild game, wild horses that could be tamed, and an opportunity to own land through the homesteading process in Nicodemus, Kansas.

The townsite of Nicodemus was planned in 1877 by W.R. Hill, a land developer from Indiana, and Reverend W.H. Smith, a black man, forming the Nicodemus Town Company. Reverend Smith became the President of the Town Company and Hill, the treasurer. Named for a legendary figure that came to America on a slave ship and later purchased his freedom, Nicodemus was organized with specifically solicited settlers. The Reverend Simon P. Roundtree was the first settler, arriving on June 18, 1877.  Zack T. Fletcher and his wife, Jenny Smith Fletcher (the daughter of Reverend W.H. Smith), arrived in July, and Fletcher was named the secretary of the Town Company. Smith, Roundtree, and the Fletchers claimed their property and built temporary homes in dugouts along the prairie.

In the late summer of 1877, 308 railroad tickets were purchased for more families in the South to take them to the closest railroad point in Ellis, Kansas. Still 35 miles away, the families walked to Nicodemus, arriving in September 1877. Within one month, the first black child was born in Graham County to Charles & Emma Williams.

Building homes along the Soloman River in dugouts, the original settlers found more disappointment and privation as they faced adverse weather conditions. In the Promised Land of Kansas, they initially lacked sufficient tools, seed, and money. Still, they managed to survive the first winter, some by selling buffalo bones, others by working for the Kansas Pacific Railroad at Ellis. Yet, others survived only with the assistance of the Osage Indians, who provided food, firewood, and staples. 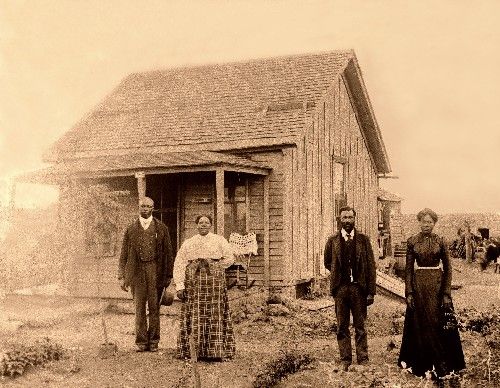 The spring of 1878 also heralded more families from the South, and a local government was established, headed by “President Smith.” One woman arriving in the spring, Williana Hickman, said years later of arriving at Nicodemus,

“When we got in sight of Nicodemus, the men shouted, ‘There is Nicodemus!’ Being very sick, I hailed this news with gladness. I looked with all the eyes I had. I said, “Where is Nicodemus? I don’t see it.” My husband pointed out various smokes coming out of the ground and said, “That is Nicodemus.” The families lived in dugouts… The scenery was not at all inviting, and I began to cry.”

Despite the living conditions and their longing for the forested hills of Kentucky, Williana and her husband Reverend Daniel Hickman stayed, organizing the Mt. Olive Baptist 4 miles west of Nicodemus in a dugout with a sod structure above it. By 1880, a small, one-room, stone sanctuary had been erected at the same site.

The Nicodemus Town Company produced numerous circulars to promote the town, inviting “Colored People of the United States” to come and settle in the “Great Solomon Valley.” The Reverend Roundtree became actively involved in the promotion and worked with Benjamin “Pap” Singleton, a black carpenter from Nashville, who traveled all over distributing the circulars. Singleton, who could not read or write, distributed so many circulars that he was sometimes called the “Moses of the Colored Exodus.” The Blacks who decided to emigrate soon acquired the nickname “Exodusters.”

One of the town’s first settlers, Zachary Fletcher, became the first postmaster and the first entrepreneur in Nicodemus, establishing the St. Francis Hotel and a livery stable in 1880. His wife, Jenny Smith Fletcher, became the first postmistress and schoolteacher and one of the original charter members of the African Methodist Episcopal Church. The complex that Fletcher built, which housed the post office, school, hotel, and stable, later became known as the Fletcher-Switzer House and was an important focus of activity in the community. The building still stands in Nicodemus today. 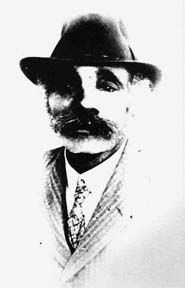 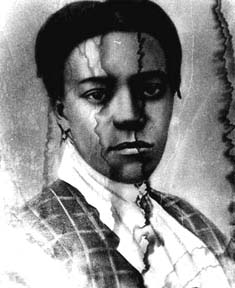 By 1880, Nicodemus had a population of almost 500, boasting a bank, two hotels, three churches, a newspaper, a drug store, and three general stores – surrounded by twelve square miles of cultivated land. As the town began, Governor John St. John made a speech welcoming the new arrivals. Then, possibly at the urging from S. J. Gilmore, land commissioner for the Kansas Pacific Railroad, who said of the blacks, “Indications are that we will be overrun with them next year,” Governor St. John began to discourage black immigrants and said that conditions in Kansas were not as promising as they had been led to believe. 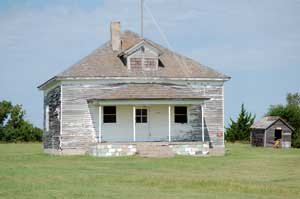 By 1887 Nicodemus had gained more churches, stores, a literary society, an ice cream parlor, a lawyer, another newspaper, a baseball team, a benefit society, and a band. Hopes were high in the community when the railroad talked of an extension from Stockton to Nicodemus. In March of 1887, the voters of Township approved the issuance of $16,000 in bonds to attract the Union Pacific Railroad to the community. Despite the bond issue, the town and the railroad could not agree on financial compensation, and the railroad withdrew its offer. In 1888, the railroad established the extension six miles away south of the Solomon River. Leaving Nicodemus a stranded “island village,” businesses fled to the other side of the river to the Union Pacific Railroad camp that later became known as the town of Bogue. With the businesses leaving, Nicodemus began a long gradual decline.

But, in 1929, the Great Depression brought disaster to Nicodemus, as farm prices fell. Most of the young people began to leave the area during this time.

Further devastation occurred when the area faced severe droughts in 1932, 1933, and 1934, followed by Kansas’s infamous dust bowl days in the late winter and early spring of 1935. Entire families then left what had become an unproductive region.

By 1935, the small town was reduced to just 76 people and supported only a church, a hall, and a meagerly stocked store. Most of the marketing and trading were carried on at Bogue, about six miles away. 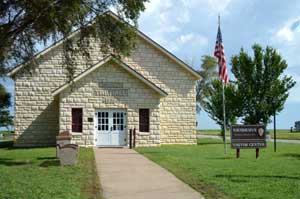 By 1950 Nicodemus was reduced to 16 inhabitants, and the necessities of life had to be purchased in nearby Bogue. The post office closed in 1953.

More than a half-dozen black settlements sprung up in Kansas after the Civil War, but Nicodemus was the only one to survive. Kansas’ first black settlement and Graham County’s first community was designated as a National Historic Landmark in 1976. Twenty years later, on November 12, 1996, Nicodemus was designated as a National Historic site. This legislation directs the National Park Service to assist the community in preserving historic structures and interpreting the history for the benefit of present and future generations.

The only remaining business is the Nicodemus Historical Society Museum, which operates sporadic hours. Pamphlets, a Walking Tour Map & Guide, and video presentations are available at the Nicodemus Community Center. Today, Nicodemus is called home to approximately 20 people.

Every year on the last weekend in July, Emancipation Day is celebrated, and descendants of original town settlers come home. The town is filled with people who are proud of their heritage. Events include a parade, food, and celebration of heritage and family.