The primary leader of the migration of Exodusters to Kansas, Benjamin “Pap” Singleton, was born a slave in Nashville, Tennessee, in 1809. Still, throughout his life, he was determined to be free. He was trained as a cabinet maker and was sold as a slave several times but always managed to escape. Eventually, he fled to Canada and then settled in Detroit, Michigan, where he ran a boarding house that frequently sheltered runaway slaves.

During the Civil War, he left Detroit and returned to Nashville under Union Army occupation. Living in a large Union camp for fugitive slaves, he made a living building cabinets and coffins. While peddling his products in the late 1860s, Singleton became convinced that his mission was to help his people improve their lives and urge them to acquire farmland in Tennessee. However, whites would not sell productive land to them, and he soon took up another tactic, preaching to them to go west to farm and own federal homestead lands.

He began scouting land in Kansas in the early 1870s and returned to the south to organize parties to colonize Kansas. In 1873 nearly 300 African Americans followed him to Cherokee County and founded “Singleton’s Colony.” Soon, others would settle in Wyandotte, Shawnee, and Lyon County. By 1874, Singleton and his associates had formed the Edgefield Real Estate and Homestead Association in Tennessee, which steered more than 20,000 black migrants to Kansas between 1877 and 1879.

Many of those who came were unprepared and soon left the area, leaving dozens of ghost towns in their wake. But, those who stayed improved the quality of their lives and made important contributions to the state and the communities in which they lived.

In 1880, Singleton was called to testify before Congress regarding the alarming migration of blacks from the South.

In 1881, he used his reputation to bring together blacks into an organization called the Colored United Links in Topeka, Kansas. The objective was to combine the financial resources of all African-Americans to build black-owned businesses, factories, and trade schools. The organization was successful enough that the Presidential candidate, James B. Weaver of the Greenback Party, met with the group to discuss combining the two groups. However, membership faltered, and the organization soon fell apart after 1881.

After the Colored United Links failed, Singleton became convinced that blacks would never be allowed to succeed in the United States. In 1883, he joined up with St. Louis, Missouri, businessman Joseph Ware and black minister John Williams, proposing that blacks migrate to the Mediterranean island of Cyprus; however, this idea was short-lived.

In 1885 Singleton moved to Kansas City, where he organized the United Transatlantic Society, intending to have all blacks relocate from the United States to Africa. Though the group lasted until 1887, it never managed to send anyone to Africa. Finally, his health deteriorated, and Singleton retired from his life of activism. However, he spoke up one final time in 1889 when the call was raised for a portion of the newly opened Oklahoma Territory to be reserved as an all-black state. 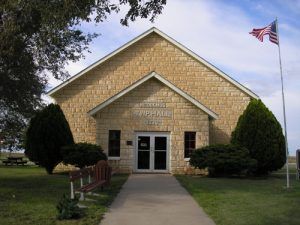 The Nicodemus Town Hall continues to stand by Kathy Alexander.

For many years it was believed that Benjamin Singleton died in 1892, and the location of his grave was unknown; however, according to the Kansas Historical Society, it was discovered through digitized records that he lived until February 17, 1900, and died at the age of 91 in Jackson County Missouri, and is said to be buried in an unmarked grave at Union Cemetery in Kansas City, Missouri.

Today, there is the one remaining town that Exodusters established from the south – Nicodemus, Kansas. Today it is a National Historic Site.

Compiled and edited by Kathy Alexander/Legends of Kansas, updated October 2022.