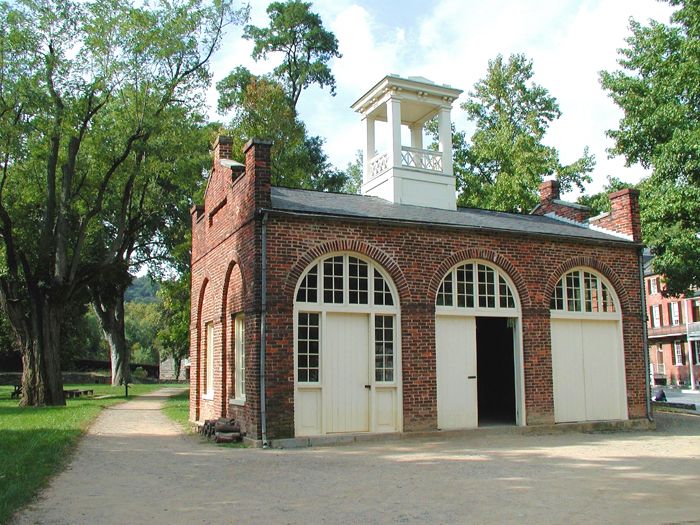 The structure now called John Brown’s Fort in Harpers Ferry, West Virginia was built in 1848 as a fire engine and guardhouse for the United States Armory and Arsenal at Harpers Ferry.

However, from the beginning, the Armory labored under a deficiency of waterpower and charges of mismanagement. After more than four decades, plans for a complete renovation were drawn up in 1844. Between 1845-1854, seven new workshops were erected, 121 new machines were installed, the Armory Canal was enlarged, and heavier millwork was constructed. This extensive reconstruction created a more integrated physical plant, whereby the flow of work from one stage of arms production to another was greatly facilitated. These buildings became known collectively as the “U.S. Musket Factory.” Compared to 1802, when the Armory employed just 25 men, by 1859 the workforce had grown to about 400.

One of these improvements included the one-story brick engine and guardhouse, which measured 35½ x 24 feet. 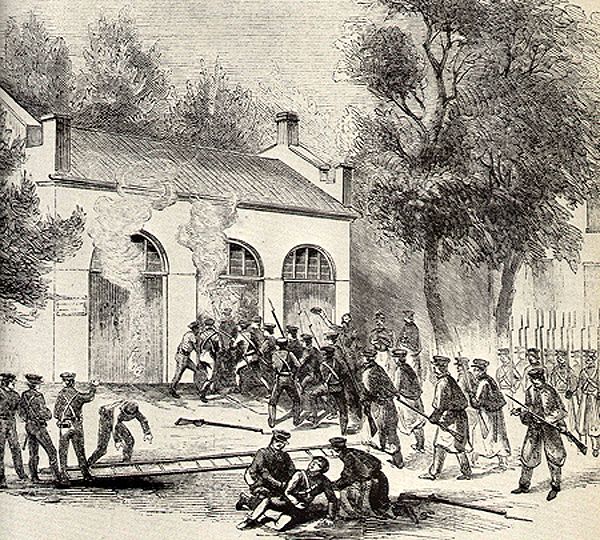 On October 16, 1859, the abolitionist John Brown led a group of 21 men in a raid on the arsenal. Brown, with his small army, planned to use the guns and ammunition of the armory to liberate and end slavery in the United States. However, his liberation movement failed when U.S. Army Lieutenant Colonel Robert E. Lee led a force of 86 Marines to the town on October 18th. Brown and his men had taken refuge in the engine house when the troops arrived and after negotiations failed, the soldiers stormed the engine house, killing some of the raiders and captured the rest of them.

Afterward, John Brown was tried for treason against the Commonwealth of Virginia, convicted and hanged in nearby Charles Town. But his raid and its publicity was a turning point in the many disagreements between the North and South and led the nation away from compromise and closer to Civil War. After this event, the building was referred to as “John Brown’s Fort.”

When the Civil War began, the Harpers Ferry Armory became an immediate target and changed hands several times during the war. During these years, the building was utilized as a prison, a powder magazine, and probably a supply house. Union troops admired the fort as they passed while Confederate troops cursed it and many troops broke pieces of brick and wood off the fort as souvenirs. 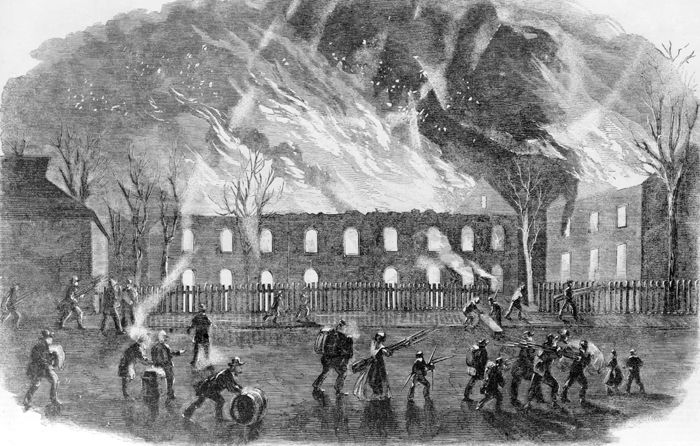 Burning of the Arsenal at Harpers Ferry during the Civil War by David H. Strother, 1861

By the time the war ended, the only building that remained at the armory was John Brown’s Fort.

In 1891, the fort was sold, dismantled, and transported to Chicago where it was displayed a short distance from The World’s Columbian Exposition. The building, attracting only 11 visitors in ten days, was closed, dismantled again, and left on a vacant lot.

In 1894, Washington, D.C. journalist Kate Field, who had a keen interest in preserving memorabilia of John Brown, spearheaded a campaign to return the fort to Harpers Ferry. After five acres of land was made available by local resident Alexander Murphy, and the Baltimore & Ohio Railroad offered to ship the disassembled fort free of charge, it was moved back to Harpers Ferry. In 1895, John Brown’s Fort was rebuilt on the Murphy Farm about three miles outside of town on a bluff overlooking the Shenandoah River.

In 1903, Storer College began its own fundraising drive to acquire the structure. In 1909, on the occasion of the 50th Anniversary of John Brown’s Raid, the building was purchased and moved to the Storer College campus on Camp Hill in Harpers Ferry. There, it was used as a museum and many students were required to give tours of the museum to strengthen their public speaking skills.

In 1960, the National Park Service acquired the building and in 1968, it was moved back to the Lower Town.

Because the fort’s original site was covered with a railroad embankment in 1894, the building was placed about 150 feet east of its original location. Located at Shenandoah and Potomac Streets, it open to the public during park hours.