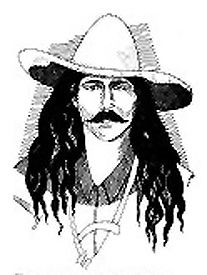 James was born on September 23, 1846, in Ohio to Isaiah and Martha Denney Houck. However, the family was living in Wisconsin in 1860. Described as lanky with unruly sandy hair, bushy eyebrows, and blue eyes, he grew up to fight in the Civil War with a Wisconsin regiment. Afterward, he made his way west, spending some time in Wyoming, before making his way to Arizona in about 1870. At the age of 23, he came to the state with all of his possessions packed on a burro and spent several years trying to find his fortune in various mining camps.

In 1874, he began to carry army dispatches and mail as an express rider between Fort Whipple, Arizona and Fort Wingate, New Mexico. This was a dangerous job through the wild and unsettled country that was prone to Indian attacks.

In 1877 he gave up his job as an express rider and established a trading post on the south side of the Puerco River in Navajo country between Fort Wingate and Holbrook, Arizona. He chose the spot because it had a dependable water supply and it was along the proposed railroad route. Though the Navajo were not pleased with Houck settling on their land and tried to chase him away, James stood his ground. Over time, the Indians began to trade wool, sheep, and other items for store merchandise at the trading post which consisted of an oblong red sandstone building put together with mud and mortar. He also ran sheep in the area. 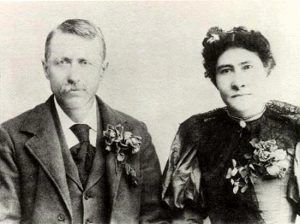 In 1880, he met a pretty young girl at Fort Wingate named Beatrice “Bessie” McCarty. After a short courtship, they married and the couple would eventually have seven children.

In 1881, the railroad arrived and Houck’s trading post became a stop on the railroad where steam engines filled their water tanks. Soon a settlement grew up around the trading post and when a post office was established in 1884, it was called “Houcks Tank.” Later the town’s name was shortened to simply Houck.

In 1885, he sold the trading post and moved his young family first to Springerville and then to Heber, where he established the JDH Ranch, raising both cattle and sheep. He also tried his hand at politics and was elected to represent Apache County in the 13th Legislative Assembly at Prescott.

He was serving as an Apache County Deputy Sheriff under Commodore Perry Owens when the Pleasant Valley War between sheep and cattlemen erupted in 1887. In September 1887, he was involved in the killing of John Graham and Charles Blevins at the Perkins Store in Pleasant Valley. He was also involved in the August 11, 1888 lynching of Jim Stott, Kim Scott, and Billy Wilson, who were alleged cattle rustlers. Before it was over, more than 20 men were killed.

In 1900, Houck bought Cave Creek Station, located about 35 miles north of Phoenix, Arizona, and developed it as a shearing camp for the many area sheepmen. There, with the help of his older sons, he built a rock building that served as a general store, saloon, and post office. He also put up a barn to hold hay and feed for sale, as well as grain for his own 30 horses. He also became a Maricopa County deputy sheriff and operated a three-times-weekly stage and mail service running between Cave Creek and Phoenix. As more and more sheepmen came down from the northern mountains for the winter, Houck built a boarding house. Visitors during these years enjoyed Bessie’s good meals and the liquor that flowed freely in the saloon. 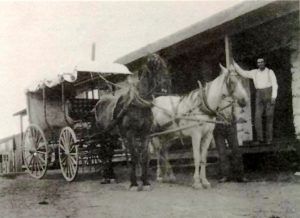 When shearing season was over, the boarding house served as a community center, hosting gatherings, dancing, and holiday celebrations. At about the same time, renewed mining activity in the area brought more people which really boosted their business. The Houcks also advertised their ranch as a health resort and rented tent houses along the cool banks of the stream to people with tuberculosis. Bessie and her daughters frequently nursed sufferers through their last days.

As Houck took over the reins of the settlement, controlling its only industry, the store, and the post office, area newspapers began referring to him as the “Cave Creek King.”

Houck enjoyed success for about 10 years until drought cut the herds and the government stepped in to stop overgrazing of both cattle and sheep in the area. Several drought years brought Cave Creek to a useless trickle and many people gave up and moved away from the area. In the midst of these down years, James and Bessie divorced and their children scattered.

Report of James Houcks Death in a local newspaper.

In 1915, Jim married Frances Indera Newman, but the passing years of financial struggles caused him to close his store. The post office then moved to another store east of Cave Creek Station, which soon became the new center of the community. Though he had been described as a happy-go-lucky man in his youth, he took a fatal dose of strychnine on March 21, 1921. He was buried at the Greenwood Memory Lawn Cemetery in Phoenix.

Afterward, the ranch passed to his second wife, whose son continued to run it for 20 years. Later, it was subdivided and today, Cave Creek is the largest town in Maricopa County, Arizona.