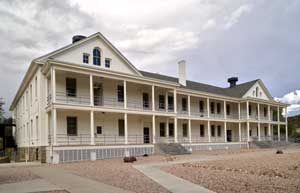 Fort Whipple, Arizona was established in November 1863 one-mile northeast of Prescott in the Chino Valley. The U.S. Army post served as Arizona Territory’s capital prior to the founding of Prescott. It was named for Lieutenant Amiel W. Whipple, who led a military expedition into the area in 1853-54 and established the first access routes to nearby goldfields but died in 1863 of wounds received during the Civil War.

The post was moved in May 1864 to Granite Creek, closer to Prescott. Its purpose was to protect miners and settlers from Indian raids and for years, the cavalry and infantry soldiers stationed at the fort participated in a number of Indian skirmishes. By 1869, the quickly erected buildings were condemned, torn down, and new buildings replaced them.

The next year, the Whipple Barracks became the Headquarters for the Military Department of Arizona in April 1870.  At the same time, the post was serving as a tactical base for the United States Cavalry during the Indian Wars of 1864 to 1882. The post also served as General George Crook’s District of Arizona headquarters in 1882. 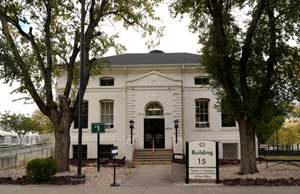 Once the Indians were “under control,” the post lost its importance and was discontinued in 1898. However, just four years later it was re-garrisoned in 1902 and new officers’ quarters built in 1904. The post closed for the last time on February 15, 1913. It was reactivated as a U.S. Army Hospital in 1918 to treat World War I veterans. It ceased being a military installation in 1922 and was later made into a Veteran’s Administration Hospital.

Today, the fort grounds are much reduced – from 1,700 acres to about 150 acres and many of the old buildings have been obliterated by modernization. However, other historic buildings remain and the Fort Whipple Museum stands out among the buildings, with its colorful painted exterior beckoning to visitors. Situated in one of the officer quarters buildings on a hillside south of the hospital, the museum is a joint project between the hospital and the Sharlot Hall Museum in downtown Prescott. The museum features exhibits that trace the history of the post and once a month, local re-enactors stage living-history presentations in and around the museum, dressing as traders, miners, and soldiers.

The museum is open free of charge Thursday through Saturday from 10:00 am to 4:00 pm. The old fort is one mile east of Prescott on US 89. 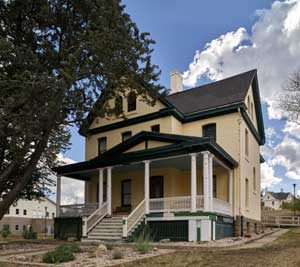