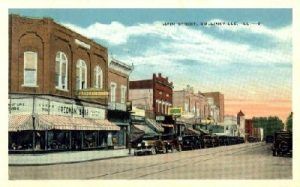 Sitting atop the Mississippi River bluffs in southwestern Illinois was once the settlement of Downing’s Station. The first known resident was a man named John Cook of Shepherdstown, Virginia who built the first log cabin in 1810. In 1817 the three Collins brothers came to the area from the east and bought Cook’s property. Later, they were joined by their parents and sisters. The family first established a distillery store, ox-grist mill, sawmill, blacksmith, carpenter, and wagon shops. Before long, more and more settlers came to the area. In 1822, the brothers renamed the settlement Unionville. However, this name lasted only a short time as another Unionville post office already existed in Illinois. The new name selected by the residents was Collinsville which became an official on December 21, 1825.

The town was platted in 1837 and officially became an incorporated village in 1850, with Judge D.D. Collins as its first president. Although his family and the Collins family who first settled here were friends and fellow Presbyterians, they could not claim knowledge of any kinship.

In 1857, the first coal mine was sunk by Peter and Paul Wonderly which started the coal mining era of the city. Another was opened by John Maull and David Williams in 1862. A man named Dr. Lumaghi came in 1865 and opened a zinc works and the first of his mines in 1871. The Lumaghi Coal Co. lasted the longest and closed its last mine in the Spring of 1964.

As the miners poured in, the city began to grow, establishing more and more businesses. In 1885 a new city hall, designed in the Italianate style, was built which continues to be used today.

In December 1918, the doors opened to the Miners Institute, a cornerstone in downtown Collinsville. The building, now owned by the Collinsville Area Recreational District, still stands and is currently undergoing renovations. It houses the Miners Theatre, shops and other businesses.

By 1922, 3,000 coal miners and their families made up almost a third of the City’s 9,800 residents. More mines were opened during the next half-century, as well as other industries including zinc and lead works, a knitting mill, a cowbell factory, and canning plants.

Most of these were closed by 1950 as the City evolved into a “bedroom community” of St. Louis, only nine miles west, and has continued to grow in population as families seek a quieter, less hectic pace of life away from the hustle and bustle of urban living.

Today, the City of Collinsville is one of the fastest-growing suburbs in the St. Louis metropolitan area. A relatively small suburb of just over 25,000 people, the town provides a panoramic view of the magnificent Gateway Arch and downtown St. Louis. 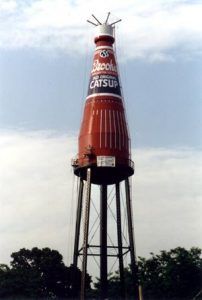 Collinsville’s quaint and inviting downtown main street is home to unique shops, fun eateries, and beautiful architecture. The 150-year-old D.D. Collins House, the stately Blum house, and the historic Miner’s Theatre are highlights of an interesting and educational, self-guided walking tour. Be sure to bring your camera to document your visit to the World’s Largest Catsup Bottle, a world-renown roadside attraction just south of Main Street. Also in Collinsville is one of the oldest registered cemeteries in Illinois as well as a historic Bull Durham sign dating back to 1908, which is only one of six such signs remaining in the country.

To learn more about Collinsville and its rich history, visit the Collinsville Historic Museum, where you will find a large assortment of historic artifacts, newspapers, journals, photographs, and memorabilia documenting Collinsville’s long history. It is located at 406 West Main Street.

While in the area, a must-stop are the historic Cahokia Mounds – the largest archaeological site in America.

The Collinsville exit is just about 10 miles northeast of downtown St. Louis via I-55.