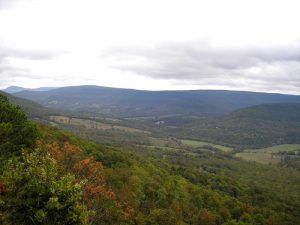 Hot Springs, Arkansas, located along the Ouachita River in the Central Ouachita Mountains, is the county seat of Garland County and home to the Hot Springs National Park, the oldest federal reserve in the United States. The city is named for the natural thermal water that flows from 47 springs on the western slope of Hot Springs Mountain. These waters that flow out of the ground at 147 degrees have been popularly believed for centuries to possess medicinal properties and were a subject of legend among several Native American tribes.

Native Americans are thought to have occupied the area as early as the Paleo-Indian era in about 12,000 B.C. Archeological evidence shows that early Indians quarried stone in the area for various tools and spear points. Though these indigenous people more than likely took part in the soothing waters of the thermal hot springs, there is no documentation of this until 1771, when Jean-Bernard Bossu, a French navy captain and explorer, noted during a stay with the Quapaw Indians: “The Akanças country is visited very often by western Indians who come here to take baths,” for the hot waters “are highly esteemed by native physicians who claim that they are so strengthening.” 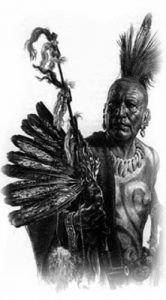 Other natives thought to have utilized the area were likely related to the historic Caddo Indians. Local legend speaks of the thermal springs as constituting a neutral ground in which various tribes, even those at war with each other, could co-exist in peace, at least temporarily.

The area was first explored In 1673, by Father Jacques Marquette and fur trader Louis Jolliet, who claimed the area for France. The 1763 Treaty of Paris ceded the land to Spain; however, in 1800 control was returned to France until the United States made the Louisiana Purchase in 1803.

Afterward, President Thomas Jefferson sent out several expeditions to explore the new territory. One of these was the famous Louis & Clark Expedition, who explored the Pacific Northwest. Another was the Hunter-Dunbar Expedition which was tasked with exploring “the hot springs” and the “Washita” River and in present-day Arkansas and Louisiana. In December 1804, Dr. George Hunter and William Dunbar traveled up the Ouachita River where they made a four-week study of the hot springs. Though they were unable to discover the springs’ water source, they found a lone log cabin and a few rudimentary shelters used by people already visiting the springs for their healing properties. 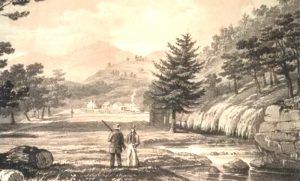 In 1807, a Lousiana planter Emmanuel Prudhomme became the first permanent settler of what would become the village of Hot Springs, and he was soon joined by others. The site soon attracted regular visitors, as people sought the reputed beneficial effects of the thermal springs.

The accommodations at Hot Springs were not praiseworthy in the early 1800s, as noted by one visitor:

“The accommodations for using the water are so entirely deficient that it would not be wonderful if but little was affected by them. The sweat house is rudely constructed with boards, which but partially exclude the air; and the mouth of it is stopped by a blanket. The patient has to come into the open air to dry himself, hurry on his clothes and go home.” 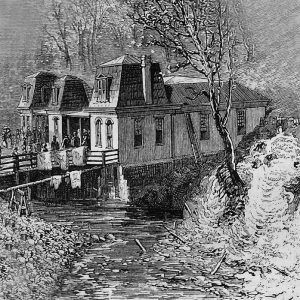 On August 24, 1818, the Quapaw Indians ceded the land around the hot springs to the United States in a treaty. Arkansas became its own territory in 1819 and the following year, the Arkansas Territorial Legislature requested that the springs and adjoining mountains be set aside as a federal reservation. The same year, another treaty designated southwest Arkansas for Choctaw resettlement, but this was amended in 1825 to redirect the Choctaw to Oklahoma.

Meanwhile, the first structure that could be considered a hotel opened in the new settlement of Hot Springs. In 1830, the first bathhouse was built by Asa Thompson, which was a primitive log structure with a wooden tub near a sweat bath. Two years later, a second log bathhouse with more tubs was built near the present-day Arlington Lawn and Superior Bathhouse.

By the early 1830s, the springs were proving to be a major attraction, and, in 1832, Congress reserved the area for federal use, exempting it from settlement and granting federal protection of the thermal waters. However, people found ways around that and construction occurred near the springs anyway.

The first bathhouses were crude structures of canvas and lumber, little more than tents perched over individual springs or reservoirs carved out of the rock. Bathhouses made of wood frame could be found in Hot Springs by the 1850s. These replaced the crude huts and were still operating well into the late 19th century. Wooden troughs carried water from the springs to a tank and the bather could then manipulate the cold and hot water by pulling a rope. Afterward, the bather went to a special vapor room (a room over a thermal spring with cracks around two inches apart in the floor to allow vapor to rise). Following the vapor, the bather received a dousing of cold water before dressing. 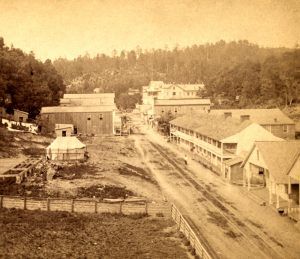 When the town of Hot Springs was incorporated in 1851, it was already home to two rows of hotels, along with several bathhouses and businesses. The city attracted not only seekers of leisure but also numerous invalids hoping to find relief in the mineral-laden springs.

During the Civil War, the Arkansas governor, fearing that Little Rock might be captured by Union troops in 1862, relocated the state records to Hot Springs. From May 6 to July 14 of that year, Hot Springs served as the state capital. The Confederate government then returned to Little Rock, before relocating to Washington the following year. Afterward, Union troops advanced upon and captured Little Rock. Hot Springs was never occupied by Union troops and largely escaped the violence of the war save for two minor skirmishes that occurred on February 4, 1864.

When the war was over, continued settlement and construction occurred near the springs with claimants using various legal means to establish ownership of the property. By 1870, the city of Hot Springs had a population of 1,200 inhabitants and by 1873 six bathhouses and 24 hotels and boardinghouses stood near the springs. In 1875, the Rock Island narrow-gauge railroad arrived bringing more growth and visitation to the city. Within no time, Samuel W. Fordyce and two other entrepreneurs financed the construction of the first luxury hotel in the area — the Arlington Hotel, which opened in 1875. At that time, it was the largest hotel in the state. 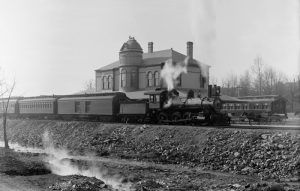 In the meantime, the fight over property rights continued into Congress and the Supreme Court. In 1877, Benjamin F. Kelley was appointed as the first superintendent of the reservation. He soon initiated a number of engineering projects, allowing private owners to convert the previously ramshackle downtown bathhouses into a row of attractive buildings. This decision, along with the arrival of the railroad transformed Hot Springs into a cosmopolitan spa that would attract visitors from across the nation.

In 1878, the federal government established a simple frame building over what was popularly known as the “mud hole” spring in order to service the poor, who could bathe there for free. Initially, the site was open to all regardless of gender or race. However, a new brick building was erected in 1891 that was later remodeled to provide for racial and gender segregation.

Hot Springs Creek, which ran right through the middle of all this activity, drained its own watershed and collected the runoff of the springs. Generally, it was an eyesore, dangerous at times of high water, and mere collections of stagnant pools at dry times. In 1884 the federal government put the creek into a channel, roofed over it, and laid a sidewalk down above it. Much of it runs under Central Avenue and Bathhouse Row today. 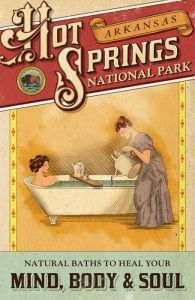 In 1886, the Chicago White Stockings baseball franchise began spring training in Hot Springs. Afterward, more baseball teams followed and by the early 20th century, Hot Springs was known for its baseball training camps. The city would continue to serve as a major site of spring training until the 1920s, by which time the franchises had moved to places with warmer climates in the winter such as Florida and Arizona.

During the early 1900s, thousands of people flocked the area to experience the waters’ curative powers. Elaborate bathhouses were built to house the large number of tourists visiting for springs and spa treatments. By this time, electric trolleys, telephone lines, and new stores across from Bathhouse Row tempted visitors.

Thoroughbred horse racing started in Hot Springs with the construction of Essex Park in 1904, however, a state law prohibiting betting on horse races was passed in 1907. In the next decades, the park was reopened and closed. 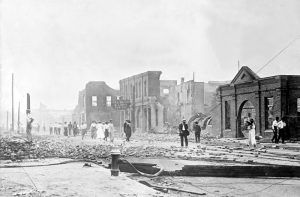 Hot Springs, Arkansas after the 1913 fire by Bain News Service

During the early 20th century, a number of institutions related to health continued to thrive. The Crystal Bathhouse opened in 1904 for use by African Americans and the Levi Hospital was founded in 1914, which continues to operate today. However, the community also suffered a number of setbacks. A fire in 1905 killed as many as 25 people and destroyed nearly 400 buildings. Another in 1913 destroyed a significant portion of the city’s tourist district, including the Crystal Bathhouse. 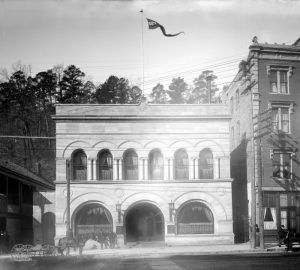 The Southern Club in Hot Springs, Arkansas was often frequented by gangsters beginning in the 1920s. Today, the building serves as Josephine Tussaud’s Wax Museum. Photo by Detroit Publishing, 1900.

In 1926, Leo McLaughlin was elected mayor and fulfilled a campaign promise to run Hot Springs as an “open” town, which included legal gambling. As mayor, he reigned as the undisputed boss of Garland County politics for the next 20 years. During his time in office, many underworld characters frequented Hot Springs’ spas, and gambling became one of the town’s most popular forms of entertainment. The Southern Club became one of the favored hangouts for many of these gangsters, who included such names as  Owen Vincent “Owney” Madden, Charles “Lucky” Luciano, and Al Capone.

Illegal gambling continued in Hot Springs even after the McLaughlin political machine was ousted. By 1962, the city’s reputation had become so notorious that it became a major issue in the gubernatorial race. The explosion of a bomb in the Vapors Casino in January 1963 made the problem of organized crime in the city a widespread concern. Soon after Winthrop Rockefeller took office as governor in 1967, he ordered the Arkansas State Police to crack down on gambling in the spa city.

Despite the closure of the city’s gambling establishments, as well as the shuttering of the downtown bathhouses from the 1960s to the 1980s, Hot Springs continued to grow. Today, it is called home to about 37,000 people.