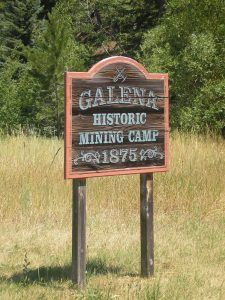 Galena, South Dakota, is a ghost town and old mining camp located in the Black Hills of Lawrence County, about 11 miles southeast of Deadwood.

In 1874, gold was discovered in the Black Hills, which drew several illegal prospectors to the region. They were trespassing on land promised to the Lakota people in the 1851 Treaty of Fort Laramie. By 1875, several miners were looking for gold in a gulch near Bear Butte Creek. What they found instead were veins of galena, a natural mineral found in lead and silver. Now the prospectors worked on mining silver, and by March 1876, several claims were filed. Soon, a mining camp sprang up that was called Galena.

One of the first claims filed in the area was by Sarah “Aunt Sally” Campbell, a former slave likely the first non-Native woman in the Black Hills. She first came to the area with George Custer’s 1874 Expedition as a cook. She would later buy a ranch in Galena and live there until she died in 1888. She was buried at the local Vinegar Hill Cemetery.

The first houses were built out of dirt or wood. In October 1876, James Conzette built a cabin in Galena, which he planned to use as a fort against Native American raids, though it never served that purpose. Soon there was an assay shop, a few businesses, a boarding house, and 75 residents in the mining camp. 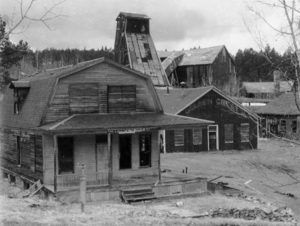 One of the first and most productive mines was the Cora. Others included the Branch Mint, Gilt Edge Main, Golden Crest, Oro Hondo, and at least three mines named Emma. These latter mines were named for an inspiring young woman who worked at the local boarding house. To meet growing demands for lumber, a sawmill was built. More mines were also established, including the Sitting Bull, Florence, Merritt, Washington, and El Refugio. Surrounding these were numerous shafts and tunnels. In December 1876, a local newspaper wrote of the Sitting Bull Mine: “is a new discovery at Bear Butte, and prospects, as well as the best previously located, and from appearances, is a true mine.” The town continued to grow through the 1870s, adding a physician, shoemaker, two hotels, restaurants, saloons, a tin shop, two more sawmills, several retail stores, and an opera house.

By June 1877, Galena supported about 200 and included four stores, three butchers, and a livery yard. By the next month, it had grown to about 275 people, 25 of whom were women. At about this same time, a post office was also established. The McDonald Smelter was also built in 1877, making it the first in the Black Hills. By the end of the year, the town had continued to grow to 400 people, at which time it had 75 homes and a mail line that came from Deadwood. 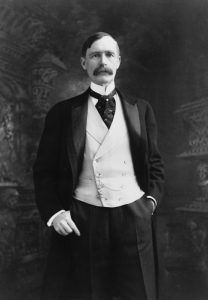 During this time, another fortune-seeker named Thomas Francis Walsh came to Galena to sell tools to those looking for gold and silver. Walsh was an Irish immigrant who came from New England to the Black Hills in the spring of 1876. He first found work in Deadwood as a carpenter before joining up with Jerry Dailey, building sluice boxes for miners. The two men also worked to find their fortunes and staked the Anchor claim northwest of Galena. But, Walsh soon moved on to Leadville, Colorado, and later to Ouray, where he became a multimillionaire from his stake in the Camp Bird Mine. His daughter, socialite Evalyn Walsh McLean, would become the last private owner of the Hope Diamond. Walsh’s shack home still stands in Galena today.

In 1878, a wealthy businessman named Colonel J.S. Davey arrived in the camp from Chicago, Illinois. He soon began to lease and then purchase several mines, including the Florence, the Sitting Bull, and the Yellow Jacket Mines and shares in other mining claims. He then built a new mill. In 1879, the Sitting Bull Mine shipped out $14,000 in silver and lead. 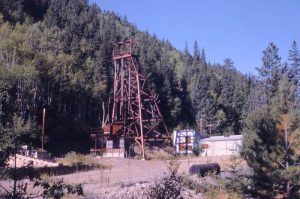 By 1881, mining operations were very successful, and Galena experienced another period of growth. That year, many of the older cabins were torn, and new ones were built. Also added were a barbershop, grocery stores, a restaurant, a hardware store, and two more hotels were planned. Other improvements included adding two more express stagecoach lines from Deadwood, a new stage line between Galena and Sturgis, and a telephone line was installed.

In the meantime, Colonel Davey’s son Frank also got involved in the mining business, partnering with a man named Patrick Gorman in purchasing the McClellan Claim. However, the partnership was short-lived, as they dissolved the partnership after a disagreement. In 1882, when Frank and a mine guard named Billy Thatcher were making their way to the post office, they ran into a drunk and disorderly Patrick Gorman. An argument quickly ensued, and when Patrick began manhandling Frank, Billy stepped in and shot Patrick, who died minutes later. Colonel Davey spent a hefty sum for Billy’s legal defense, and the guard was found not guilty. Afterward, Thatcher left town and never returned. 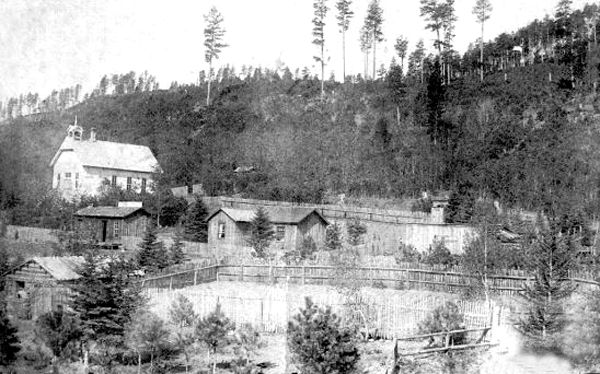 Before 1882, school for the area children was first taught in private residences and then in Delong’s Hall. But, in April 1882, the school board decided to take bids to build a schoolhouse. The framed wooden school was dedicated in September 1882. The school continues to stand today. The same year, a Catholic Church and a Methodist Church were also built. However, the Methodist preacher ran off with the church funds, so it never officially opened and was used instead as a dance and social hall.

In 1883, Colonel Davey enlarged his mill to 20 stamps and added a sizable smelter. That year he employed 125 miners and was making about $500 per day, mostly from silver. By that time, the Sitting Bull property, located on the far northeast end of Galena, had produced over $750,000 in silver. But, for Colonel Davey, his success in Galena wouldn’t last. Several years earlier, the Richmond Mine was established near Davey’s Sitting Bull Mine. He soon found himself in a legal dispute with the Richmond Mine owners, who believed that Davey and his mining crew were tunneling into their claim. The following year, the case came to trial, which caused all of Davey’s properties to cease operations, and the population of Galena suffered. 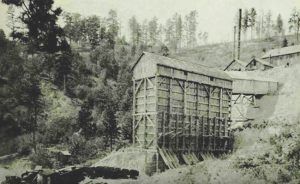 Hoodoo Mine in Galena, South, Dakota.

As the dispute escalated to a trial in front of a judge, the townspeople took sides. Davey and the Sitting Bull Mine claimed the right to follow the ore under the Apex Law, but after 95 witnesses were questioned, the judge ruled in favor of the Richmond Claim. Davey lost a good portion of his fortune from legal expenses and other costs related to the trial. After several years and a trip to the U.S. Supreme Court, Davey was exhausted and gave up, abandoning his Black Hills mining properties and headed to the goldfields of Idaho.

Davey’s mines weren’t the only ones in dispute, as many of the mines in the area were immediately adjacent to one another and sometimes on top of one another. East Coast venture capitalists backed some, and lawsuits were common. Much of the profits of the mines ended up in the pockets of attorneys. 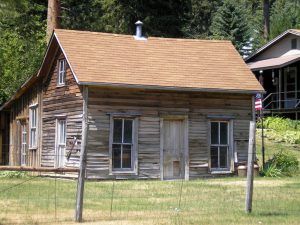 A building in Galena, South Dakota today by Kathy Weiser-Alexander.

After Colonel Davey left, the Sitting Bull Company was liquidated, and the Richmond obtained its properties. In 1886, Galena was experiencing another period of high activity as eight mining companies were pulling ore from the mines. That ended when the price of silver fell; however, it rebounded in 1895, bringing life back to the mines and the town of Galena. But, it was short-lived, lasting only until 1897. Afterward, the Union Mining Company bought most of the surrounding mines, but the operations had failed within the year, and the company scrapped their plans to build a large stamp mill. Other mining operations continued until 1891, when ore depletion and low silver prices forced their closure as well. 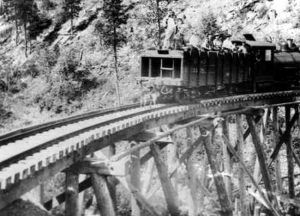 A branch of the narrow gauge railroad ran directly to the Branch Mint Mine, 1906.

By 1900, many of the Galena properties were starting to deteriorate. But, early 20th-century mining operations embraced new milling technologies, and some of the mines reopened, including the Union Hill, Gilt Edge, and Branch Mint Mines. In 1902 the Burlington and Missouri River Railroad came through Galena, and the town saw a short resurgence. At that time, many of the buildings were repaired, and the Deadwood Pioneer Times newspaper reported that “ore shipments from the district are growing every day, and the road will soon have all it can do to handle them.” The Union Hill Mine folded shortly after the railroad came to town, but other mines started up, and the Galena spur kept going. The Richmond-Sitting Bull Mining Company was formed in 1905, and sporadic activity occurred under various owners until 1922, but very little ore was produced. 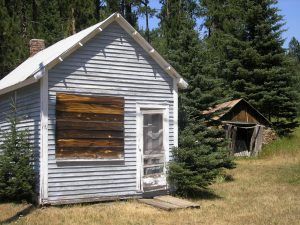 One of the largest mining operators in the Galena District was the Branch Mint Mining Company with over 200 claims, a 20 stamp mill, and their narrow-gauge railroad that ran from the mine to the mill. The mill was located at the far end of town near the Richmond-Sitting Bull property. The Branch Mint was the hope of Galena for a time; the company put large sums of money into its development. However, the mining company went into receivership in 1912.

Unfortunately, the Burlington and Missouri River Railroad discontinued operations in 1912. In the 1920s, a Black Hills newspaper reported that “Galena is nothing more than a post office.”

In 1929, the railroad tracks were removed, and by the end of the Great Depression, all the area mines had closed, except for The Double Rainbow. 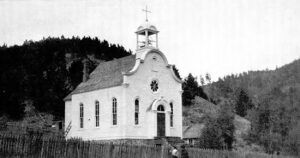 The St. Basil’s Catholic Church in Galena, South Dakota, was torn down in the 1940s.

In 1940, another mining company opened the Gilt Edge Mine, which briefly revived the town. But, it wouldn’t be enough. The Galena school closed in summer 1943. Over the years, many wood frame buildings fell into disrepair, and the lumber was used for other things or hauled away. The Catholic Church was torn down. Other structures were put to new uses, such as the Borsch Boarding House, which changed to the Borsch Resort, which catered to visitors who wanted a quiet retreat to the mountains and enjoyed the resort’s famous chicken dinners.

In the early 1970s, the Homestake Mining Company reopened some of the silver mines when the Hunt brothers cornered the silver market and ran the price up to $50 an ounce.

Today, a few families still live in Galena, and there are several vacation homes in the area. Called home to about 25 people today, the Galena Historical Society works on preserving the historic buildings, particularly the old Galena schoolhouse, which is listed on the National Register of Historic Places. Sitting on the hillside above Galena, the schoolhouse has changed very little since it was built in 1882. The desks, books, blackboards, piano, organ, and pictures of Washington, Lincoln, and Theodore Roosevelt remain as they were left in 1942. 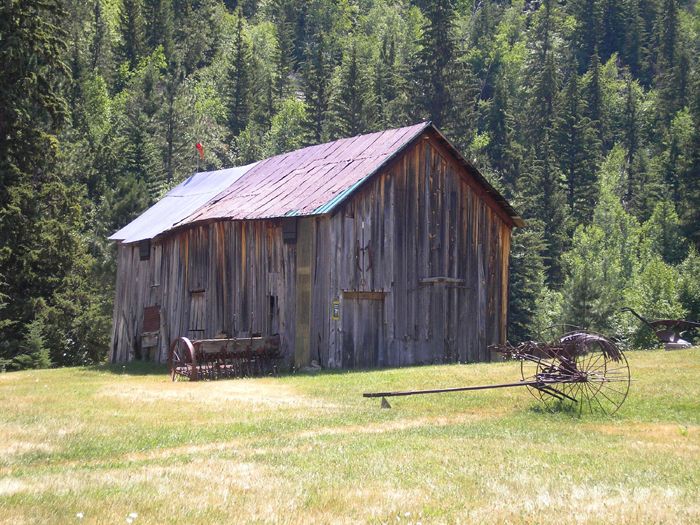 An old barn in Galena, South Dakota by Kathy Weiser-Alexander.

The Historical Society also hosts the annual Galena Historic Walk and fundraiser on the second Saturday of each June. This event features historical interpreters dressed in period clothing who allow visitors to enter some historic buildings. The event also provides a festival-like atmosphere of food and music.

To get to Galena, from Deadwood, take U.S. Highway 385 South for seven miles to Wild Bill’s Campground. Turn left onto Galena Road (Forest Roads 534 and 170) and follow it for about four miles. 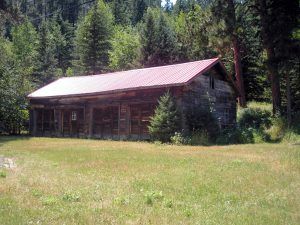