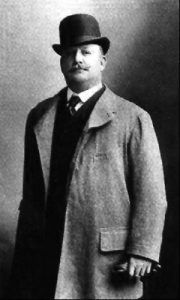 Frederic Sackrider Remington was an American painter, illustrator, sculptor, and writer who specialized in depictions of the Old American West. He specifically concentrated on the last quarter of the 19th century with images of cowboys, American Indians, and the U.S. Cavalry.

Frederic was born in Canton, New York, on October 4, 1861, the only child of Seth Pierre Remington and Clara Bascomb Sackrider. His father, Seth, was a colonel in the Civil War, worked as a newspaper editor and postmaster and was active in local politics.

For the first four years of Frederic’s life, his father was away at war. Afterward, when he returned, the family moved to Bloomington, Illinois, where his father worked as the editor for the Bloomington Republican. However, just a few years later, in 1867, the family returned to Canton, New York. As a young boy, Frederic enjoyed the outdoors, spending much of his time hunting, swimming, riding horses, and camping. Unfortunately, he was not a good student, and when indoors, he preferred drawing and sketching to homework.

When Frederic was 11 years old, the family moved again to Ogdensburg, New York, where he attended the Vermont Episcopal Institute, a church-run military school, where his father hoped discipline would focus the child on a military career. Remington took his first drawing lessons at the Institute. He was soon transferred to another military school, but, yet again, he didn’t focus on his father’s wishes. Instead, his classmates described him as a pleasant fellow, good-humored, and generous of spirit, a bit lazy, and not soldier material. Not interested in a life of labor, Frederic saw himself as a journalist, with art as a sideline. 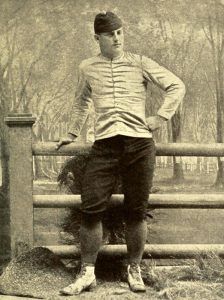 He then attended the art school at Yale University and was the only male in his freshman year. At that time, he also found football and boxing very interesting, though, once again, his skills were lacking in the sports arena; but, he quickly developed a taste for action illustrations.

In 1879, he left Yale to tend to his ailing father, who had tuberculosis. His father died a year later, at age 46. After his father died, Frederic went to work at a clerical job in Albany, New York. Afterward, he became a reporter for his uncle’s newspaper and had several other short-lived jobs.

Living off his inheritance, Remington took his first trip west at the age of 19. Wanting to buy a cattle or mining operation in Montana, he quickly figured out he didn’t have enough money for either. However, while he was there for two months, he was able to see the vast prairies, quickly shrinking buffalo herds, Native Americans, and other scenes he had imagined since his childhood, giving him an authentic view of the Old West. Harper’s Weekly published Remington’s first commercial effort in February 1882.

Remington then bought a sheep ranch in Peabody, Kansas, in 1883, trying his hand at being a stockman in the booming sheep ranching and wool trade. However, after investing his entire inheritance, he soon found he didn’t like the trade, finding it rough, boring, and isolated. By the following year, he had sold the operation and moved to Kansas City, where he first invested in a hardware store and then in a saloon. In October 1884, he returned briefly to the east, where he married Eva Caten in Gloversville, New York. The couple then settled back in Kansas City, but not for long. By September 1885, they were living in Brooklyn, New York. 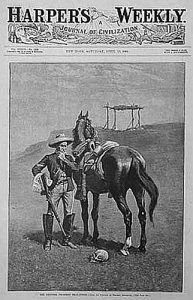 There, Remington started to sketch and paint in earnest and bartered his sketches for essentials. He also began studies at the Art Students League of New York, which strengthened his rough technique. He soon had enough success selling his paintings to locals to see art as a real profession. At the same time, newspaper and magazine interest in the dying West was escalating, and Remington began to submit illustrations and sketches to such places as Collier’s and Harper’s Weekly. His first full-page cover appeared in Harper’s Weekly in January 1886, when he was 25.

The same year, Harper’s Weekly sent him to Arizona as an artist-correspondent to cover the government’s war against Geronimo. Although he never caught up with Geronimo, Remington’s trip gave him even more experience of the West. He was sent by the magazine for more assignments and also began illustrating for Outing magazine. He was also continuing to sell his work in art exhibitions, which was going well.

In 1887, he traveled to Canada, drawing illustrations of the Blackfoot, the Crow Nation, and the Canadian Mounties. Later that year, he received a commission to do 83 illustrations for a book by Theodore Roosevelt, Ranch Life and the Hunting Trail, which would also be serialized in The Century Magazine before publication.

After a full-color oil painting entitled Return of the Blackfoot War Party was exhibited at the National Academy of Design, the New York Herald commented that Remington would “one day be listed among our great American painters.” His status as an American Artist was solidified in 1889 when he won a second-class medal at the Paris Exposition.

Around this time, Remington made an agreement with Harper’s Weekly, giving the magazine the first option to display his work, but Remington retained the rights to sell his works elsewhere if he so chose. The magazine then launched a promotional campaign for Remington, further increasing his prestige. 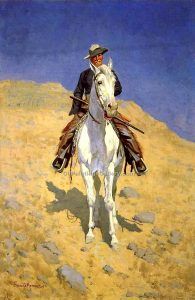 In 1890, he held his first one-man show, where he displayed 21 paintings at the American Art Gallery, which were very well received. That same year, he and his wife moved to New Rochelle, New York, to have more living space and extensive studio facilities. Remington called their substantial Gothic revival house and surrounding property “Endion,” an Ojibwa word meaning “the place where I live.”

Through the 1890s, Remington took frequent trips around the U.S., Mexico, and abroad to gather ideas for articles and illustrations, but his military and cowboy subjects always sold the best. In 1895, Remington also began to sculpt, and after much study and practice, he also became proficient in that art venue. By the turn of the century, he had also turned to write articles and a novel.

Near the end of his life, he moved to Ridgefield, Connecticut, to get further away from urbanization. He died after an emergency appendectomy on December 26, 1909, at the age of 48. He was buried in Evergreen Cemetery in Canton, New York. His wife Eva outlived him, dying in 1918. The Frederic Remington House was declared a National Historic Landmark in 1965.

During his lifetime, Remington produced over 3,000 signed paintings and drawings and 22 different subjects in bronze sculptures, a novel, a Broadway play, and over 100 articles and stories, immortalizing the Western experience. 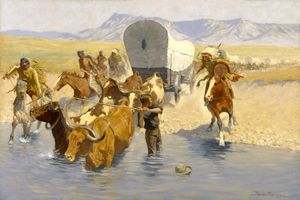 The Emigrants by Frederic Remington 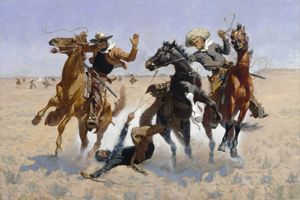 Aiding a Comrade by Frederic Remington, 1890.