Fort Wadsworth, New York, located on Staten Island, is one of the oldest military installations in the nation. The site occupies 226 acres on the northeastern shore of Staten Island, on the Narrows of New York Harbor. Rich in history and natural beauty, Fort Wadsworth allows visitors to observe an important part of our nation’s history while offering magnificent views of New York Harbor.

Staten Island, as well as the rest of New York City, was occupied by the British between 1776 and 1783. British forces fortified the area now known as Fort Wadsworth in 1779. After the American Revolution, the protection of New York, which had been so easily invaded, became a priority for the new American government. 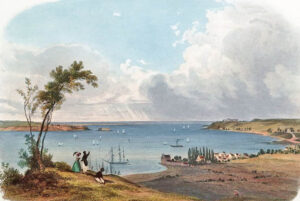 New York State began planning to construct masonry and earthen fortifications to help defend the Narrows in the early 1800s. Fortifications at Fort Wadsworth included what is now known as Battery Weed and Fort Tompkins. Other coastal fortifications built during this period included Fort Lafayette in Brooklyn, Castle Williams and Fort Jay on Governors Island, Fort Wood on Liberty Island, and Fort Gibson on Ellis Island. This system of forts came to be known as the Second American System of coastal defense and existed to protect New York harbor from foreign interference.

In 1841, New York State gave the War Department permission to occupy part of Fort Wadsworth. By 1847 the whole of Fort Wadsworth was under federal control. Fort Morton and Fort Hudson were the first forts to be modernized and were then renamed, Battery Morton and Battery Hudson.

Fort Tompkins was rebuilt between 1859 and 1876. Granite and brick replaced the sandstone version that had been completed in 1814. The stones from the original fort were used in the counterscarp of the current fort.

Battery Weed was rebuilt in 1847-1862. It was initially called Fort Richmond and renamed Fort Wadsworth in 1865 to honor Brevet Major General James Wadsworth, who was killed during the Civil War. The new Fort Wadsworth also used granite and brick to replace the original sandstone. These granite forts represented the 3rd system of fortifications.

New weaponry developed during the Civil War made these masonry forts and the smoothbore cannons they used obsolete. The U.S. government convened the Endicott Board in 1885 to create a new system of defense using the latest weaponry.

Fort Wadsworth was updated with disappearing gun batteries and expanded greatly during the time of the Spanish American War. Twelve additional batteries were designed to be invisible from the water. The batteries contained guns designed to attack enemy warships and allow American vessels the time necessary to reach and engage the enemy. The entire post was named Fort Wadsworth during this period. 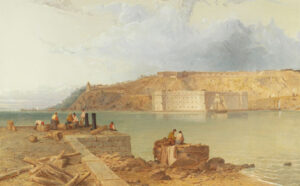 In 1907 electric lights, motorized ammunition hoists, searchlights, and telephone communications were added to the existing fortifications. Observation posts were also added so that the target’s direction, bearing, and speed could be sent to soldiers in plotting rooms. The soldiers in the plotting rooms used the information to triangulate on, and target moving enemy ships and then relayed to the artillery gun crews what elevation and direction to fire their guns.

During World War I, soldiers assigned to Fort Wadsworth manned the guns and were also sent on a rotating schedule with soldiers from Fort Hamilton to the new Fort Tilden.

After the war’s end, the fort’s command was changed to Infantry. Advances in naval weaponry allowed their range to exceed any response from a disappearing gun. The Army focused on Fort Tilden and Fort Hancock and did not build new batteries at Fort Wadsworth.

During World War II, operational control of the Fort was returned to the Coast Artillery. The main defenses were anti-aircraft guns. 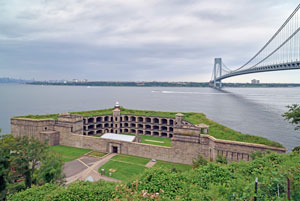 From 1955 to 1960, Fort Wadsworth was the headquarters of the 52nd Anti-Aircraft (AAA) Brigade. The unit oversaw the Nike Missile firing batteries of the New York Defenses until it moved to a new missile master facility in Highlands, New Jersey. The U.S. Army Chaplain School was located at the site from 1974 to 1979 in Fort Tompkins. After the Army vacated the site in 1979, the U.S. Navy made it the headquarters of Naval Station New York.

In 1994 the U.S. Navy turned Fort Wadsworth over to the National Park Service.

Today, the fort is part of the National Recreation Area in New York and New Jersey.