Fort McRee, Florida was one of three major installations constructed by the United States to strengthen defenses at Pensacola Bay following the War of 1812.

The fortification was built on the eastern tip of Perdido Key on a sandy bar known as Fosters Bank. Also known as the “Castle on Fosters Island,” construction lasted from 1834 and 1839. The facility included a three-story brick fort with a detached water battery close to sea level. It had a highly unusual shape because of its position on a small, narrow barrier island. It was named for Army engineer Colonel William McRee. 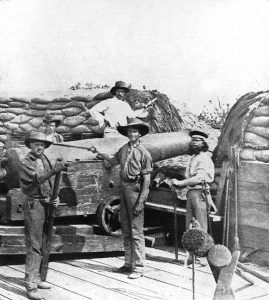 The first troops were stationed at the fort in May 1842 but in October 1845, most of them were sent to Louisiana. After the Mexican-American War, barracks were built near Fort Barrancas on the mainland in 1848. Afterward, Fort McRee was manned only during drills, maneuvers, and target practice.

“Fort McRee, in the harbor of Pensacola, is supplied with one hundred and twenty guns, composed of about equal numbers of twenty-four, thirty-two and forty-two pounders. The average effective range of these guns may be stated at 1,100 yards, and the weight of metal that may be projected from the entire battery 3,920 pounds.”

In January 1861, with the impending Civil War, U.S. troops left Fort McRee and Fort Barrancas and consolidated their forces at Fort Pickens taking most of the supplies with them. Those supplies which could not be transported were often burned. At about the same time, Southern troops occupied Fort McRee and Fort Barrancas, and by the end of March, guns were being mounted and additional batteries set up. 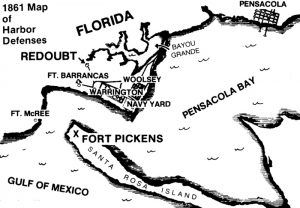 On the morning of November 22, 1861, the Pensacola area experienced its first engagement of the Civil War when Union forces at Fort Pickens and two Union warships began to bombard Fort Barrancas and Fort McRee.

Confederate forces at Fort McRee fired back against the two Union vessels and Fort Pickens, but after five hours of continued artillery exchange, the guns of Fort McRee fell silent. Under the heavy artillery fire, Fort McRee suffered extensive damage to its front, flank, and rear, making the operation of the cannons impossible. The following day, the battle resumed in earnest, but still, no fire was returned from Fort McRee. In the battle, the wooden structures within the fort had caught fire several times. 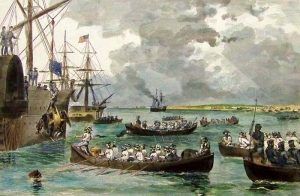 By May 1862, Confederate forces abandoned Fort McRee, which by that time, had been reduced to a burned-out and fragmented brick shell. The rebels then burned what was left of Fort McRee and several other buildings in the area believed to be of strategic value.

Essentially abandoned after the Civil War, the toll of warfare and of the elements continued to take Fort McRee into further ruin. In 1875, 50,000 bricks from Fort McRee were removed to build walkways and make structural repairs at Fort Barrancas.

By the early 1900s, what little was left of this once imposing defensive structure was rapidly crumbling.

Of the three forts that once protected Pensacola, Forts Pickens and Barrancas were preserved through continued use and later as historic sites. However, due to its location accessible only by foot or boat, Fort McRee was left to the elements. Storms and erosion continued to take their toll on the site and today, there are no visible remains of the old fort. 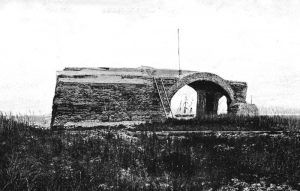