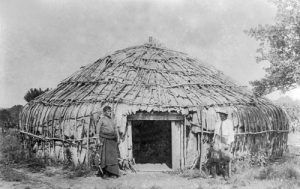 Fort Kanses in Atchison County, Kansas was not a military post. It was a French trading post constructed at a Kanza Indian village, a little below Isle au Vache, or Cow Island. These French fur traders passed up the Missouri River during the first quarter of the 18th century.

It was probably the first place in Kansas where white men lived as permanent settlers. In 1757 it was described as storing more than 100 bundles of furs. By 1764, the French trade was well established upon the Missouri River, and the eastern part of present-day Atchison County was well known to them.

The ruins of the trading post were still visible when Lewis and Clark came through at the beginning of the 19th century.