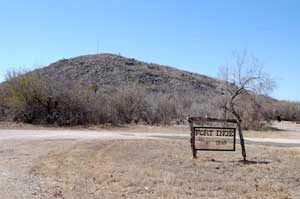 The site of Fort Inge, Texas by Kathy Weiser-Alexander.

Built in March 1849, it was established as one of several federal forts and served as a base of operations for army troops and Texas militia. Its name was changed in December 1849 in honor of Lieutenant Zebulon M. P. Inge, who was killed in the Mexican-American War Battle of Resaca de la Palma. Missions included security patrols for the construction of the San Antonio-El Paso military road, escorts for supply trains and mail, protection of settlers from bandits and Indian attacks, raiders, and guarding the international boundary with Mexico.

The post included about 12 buildings arranged around the parade ground, most built of adobe. However, the hospital was constructed of limestone. Sometime during or after the Civil War, a low stone wall was built around the fort. 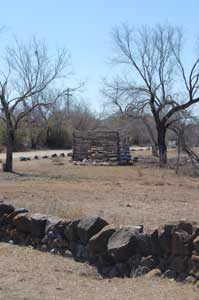 A log structure at Fort Inge, Texas by Kathy Weiser-Alexander.

Typically, the post was manned by only one company but for a brief period in 1854, it served as the regimental headquarters for the United States Mounted Rifle Regiment with a garrison of 200. During the Civil War, the post was occupied by Confederates but was reoccupied by federal troops in 1866. Three years later, in March 1869, the post was closed and the troops transferred to Fort McKavett. In 1871, soldiers returned to the post to tear down some of the buildings and recover the timber and stone to be used in construction at Fort Clark. The site was later used as a camp by the Texas Rangers until 1884.

Today, it is the Fort Inge Historical Site County Park in Uvalde, Texas.