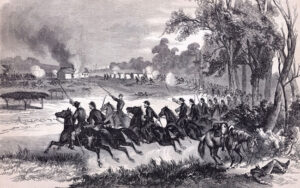 Fort Henning, Kansas, was one of three blockhouses erected near Fort Scott during the Civil War.

In the spring or early summer of 1864, work was begun on a complex of forts and earthworks to protect some of the roads leading into the town of Fort Scott. Three forts — Forts Blair, Henning, and Insley were constructed by the end of the summer. They were also tasked with guarding the quartermaster’s building, hospital, and ordnance stores.

Fort Henning, one of these blockhouses, stood at the corner of Scott Avenue and First Street, on the site afterward occupied by the post office building. It was built under the supervision of Captain William Holcke, an engineer of the United States Army, who also superintended the erection of the other two blockhouses.

The smallest of the three blockhouses, Fort Henning, was a two-story octagonal structure constructed of rough wood planks that measured 14 feet across. It had ports on both floors to allow cannons or rifles. It was surrounded by log palisades, earthworks, and wide, deep ditches. 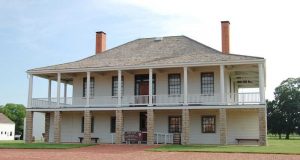 The old Fort Scott Hospital is now a Visitor’s Center by Kathy Alexander.

Under command of Lieutenant C.H. Haynes, the fort was garrisoned by troops of the Sixth Kansas Cavalry Regiment. All three blockhouses helped guard Fort Scott when Confederates under Major General Sterling Price passed through the area in October 1864 near the end of their failed raid into Arkansas, Missouri, and Kansas.

If the forts saw combat, it was limited to exchanging fire with bushwhackers.

After the Civil War ended, Forts Henning and Insley were torn down.

Some years after the war, Fort Blair was purchased by Dr. W.S. McDonald and removed to the lot immediately south of his residence in order that it might be preserved as a historical relic of the war. On December 3, 1904, a flag was raised over old Fort Blair in its new location with appropriate ceremonies. That blockhouse still exists today.