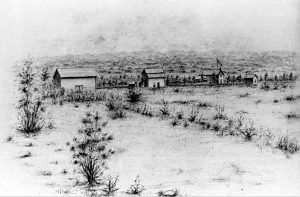 In 1885 and 1886 intertribal violence erupted among the Ute Indians, requiring four companies of Infantry and two troops of African-American Cavalry to be rushed to the area. About 700 Indians confronted the troops near where the soldiers would build Fort Duchesne, but diplomacy averted a clash.

The fort site was officially chosen on August 20, 1886, and construction began in October. Buildings included officers’ and enlisted men’s quarters, a commissary, a storehouse, and a hospital, all of adobe brick. Fort Duchesne was designated to guard the Indian frontier in eastern Utah, western Colorado, and southwestern Wyoming.

The fort served with an average detachment of 250 men until it began to decline in the 1890s. In 1893, four infantry companies were removed to Fort Douglas and by 1909 there was only one company of cavalry left. By the next year, inspecting officers were recommending closure of the post and on September 13, 1912, the last remaining cavalry unit left for Fort Boise, Idaho. The buildings were then given over to the Uintah and Ouray Indian Reservation.

Today, some of the original fort buildings are still in use, though others have been razed. The fort is located on the west bank of the Uintah River about 22 miles south of Vernal, Utah. 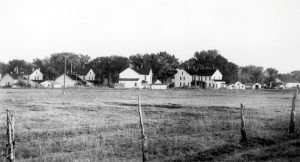