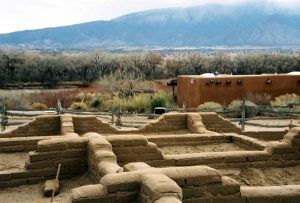 The Kuaua Pueblo Indian village, now known as the Coronado Historic Site in Bernalillo, New Mexico, was a Tiwa village located on the west bank of the Rio Grande. The village was first settled around 1325 AD by the Ancestral Puebloans (Anasazi).

“This river of Nuestra Señora [Our Lady] flows through a broad valley planted with fields of maize and dotted with cottonwood groves. There are 12 pueblos, whose houses are built of mud and are two stories high. They have a food supply of maize, beans, melons, and turkeys in great abundance.”

In August 1540, Coronado and his entourage entered the Rio Grande valley somewhere near the site of the Kuaua Pueblo. Though he was searching for the fabled Seven Cities of Gold, he found a dozen villages inhabited by prosperous native farmers instead. At that time, the Tiguex population was at its peak, with more than 20,000 people settled along 30 miles of the Rio Grande. Coronado called them: Los Indios de los Pueblos or Pueblo Indians. He and his men visited all of the 12 Tiwa villages during the course of the next year because they survived on food and other supplies that they obtained from them. Without the assistance of the Tiwa (willing or unwilling), Coronado and his men very likely would have starved to death.

Kuaua was the northernmost of the 12 villages. Its name means “evergreen” in Tiwa. When the Spanish arrived, Kuaua was then among the largest Pueblo Indian settlements in the region, spanning six acres of low terrace land. It featured approximately 1,200 surface dwellings and storage rooms, six underground ceremonial kivas, and three rectangular plazas. Doorways connected a few rooms, but most were entered via a ladder through a hatchway in the roof. 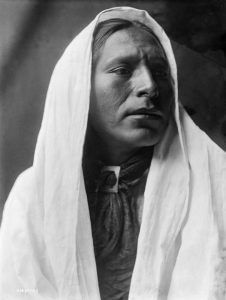 The conflict between Coronado and the Puebloans arose as the Spanish began to demand more from the area people during the severe winter leading to what is known as the Tiguex War. Finally, after Coronado had failed to wrest control over the Tiguex pueblos or to discover valuable minerals, he and his group abandoned the area to seek his fortunes in Texas and on the Kansas Plains. However, Coronado had witnessed an age of Pueblo independence and prosperity that would be entirely transformed by the end of the 16th century.

Continued pressure from later Spanish explorers led to the abandonment of the Kuaua Pueblo within a century of the first contact. Today, the descendants of the people of Kuaua live in the surviving Tiwa-speaking villages of Taos, Picuris, Sandia, and Isleta.

As a joint project between 1934 and 1940, the University of New Mexico, Museum of New Mexico, and the School of American Research excavated Kuaua. The ruins were reconstructed, and an educational site was developed featuring a museum and Spanish-Pueblo Revival-style visitor center. While most excavated areas were later reburied for protection, several room blocks and kivas were rebuilt on the village footprint to replicate the original layout. Among the most notable restorations was Kiva 3, commonly known as the Painted Kiva, where 17 layers of murals were removed and preserved, and reproduction murals were painted on its reconstructed interiors.

Today, visitors can wander through the ruins along an interpretive trail and explore the museum and visitor center.

Kuaua Ruins at Coronado Historic Site is open daily except for Tuesday, with a small admission fee. 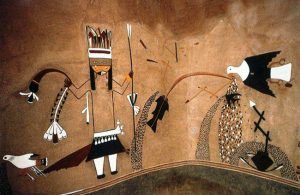