In the beginning, Central City was so filled with gold and silver that one could often just pick it up. But, as the surface minerals were gone, the dangerous work of hard-rock mining began. Many miners in the area suffered cave-ins, accidents with tools and explosives, and suffocation.

In one area mine that closed more than 85 years ago, the Pozo Shaft is said to still remain home to a number of ghostly miners. Many night-time trespassers have been frightened away by faint yellow lights coming from the old mine and the sounds of men working deep in the mine shaft far below.

In one area mine, the Pozo Shaft, it is said that many mischievous, night-time trespassers (usually acting on an ill-advised dare) have been frightened by faint but eerie yellow lights and the sounds of heavy tools and men working deep in the mine shaft below. 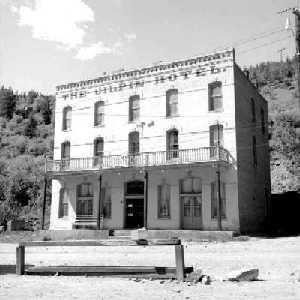 Gilpin Hotel and Casino – The original Gilpin Hotel in Blackhawk dates back to the late 1800s when the Central City/Blackhawk area was known as the richest square mile on earth. Back in those days, the hotel also housed a one-room school upstairs, with a teacher by the name of Lucille Malone. Lucille was in love with an area miner and was devastated when her lover was run over by a wagon in front of the hotel. Unable to deal with her grief, the distraught schoolteacher threw herself over the balcony of the hotel dying in the very same street as her former lover. However, Lucille seemingly remains at the hotel according to several guests.

Before the advent of gambling in Blackhawk, the Gilpin Hotel was just a small-town hotel catering to tourists and people living within the area. One of our readers, a man by the name of Thomas, was staying there with a girlfriend in the early 1990s.

His girlfriend, who was a bartender at the hotel, lived in one of the upstairs rooms. The old hotel was a little run down at the time and Thomas tells us that the only way to turn out the light in the bathroom was to twist the bulb.

Before retiring for the evening, he unscrewed the bathroom light and climbed into bed. However, at some point during the night, the light mysteriously turned back on. Getting up to unscrew the bulb again, Thomas was startled by a clatter from the first floor – the sound of pots and pans dropping from the wall. Fearing an intruder, he grabbed a baseball bat and crept down the stairwell, only to find the kitchen fully engulfed in flames. 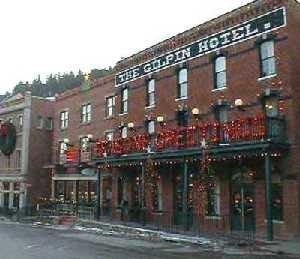 Thomas raised an alarm and the eight to ten guests quickly began to evacuate the hotel. Our hero, Thomas, returned to the hotel, covering his nose with a sock to retrieve one person who had collapsed from smoke inhalation. Unfortunately, he also tells us that one guest returned to the hotel to get some papers, never to come out again.

Thomas is convinced that Lucille provided a warning when the mysterious light bulb turned back on in the middle of the night.

After the fire, the hotel was refurbished and today it is the Gilpin Hotel and Casino. Employees and guests report sightings of the ghostly Lucille. One manager reported that he saw a woman entering a second-floor room, but when he approached, no one was there. Today, one of the casino’s restaurants bears Lucille’s name.

Haunted Mine Shaft off Colorado Highway 119

Between Blackhawk and Eldora, Colorado’s Highway 119 twists and turns through the small villages of Perigo, Rollinsville and Nederland before reaching Eldora. Like the rest of Gilpin and Boulder counties, this is old gold mining country where dozens of back roads lead off the highway, revealing old mining shafts and tumbling buildings. Both rugged and beautifully scenic, Julia and her husband loaded up their four-wheelers for a day of adventure along those awesome back roads. While they were navigating their four-wheelers along one of these many mountain paths, the road suddenly ended at a steep hillside, leaving only a trail leading up to an old mine shaft. Looking like yet another great adventure, Julia started up the trail when she suddenly felt overwhelmed and pushed back. A self-described ghost magnet, Julia couldn’t catch her breath and told her husband she didn’t feel like continuing up the trail. Her husband, a non-believer in any kind of afterlife, other than heaven and hell, only scoffed and continued up the path to the mine shaft.

Julia watched as her husband struggled up the mound of dirt to the mine shaft, but after several minutes of attempting the climb to the mine entrance, he turned back. When they returned to their Jeep he told Julia he didn’t feel good and that something was making him feel funny. Though he didn’t want to talk about it, Julia is sure that an old miner was killed at those diggings. Experiencing paranormal phenomena and seeing ghostly apparitions since she was three years old, Julia sensed that the old miner didn’t want anyone around his findings, even in death. She describes the whole area as being very bizarre and filled with spirits of the past.

The Richest Square Mile is Haunted!