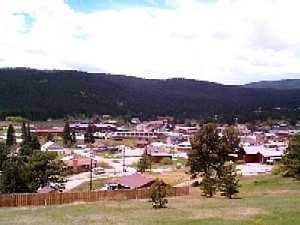 Nederland, Colorado, a picturesque little town about 45 miles northwest of Denver, claims more than just quaintness, beauty, and the ruggedness of the Rocky Mountains to draw thousands of visitors. It was also home to Grandpa Bredo Morstoel, more commonly known as “The Frozen Dead Guy.”

Bredo Morstoel died on November 6, 1989, while at the family’s mountain retreat in Norway, and was immediately packed in ice before making the long trip to Los Angeles, California, where he was cryogenically prepped and frozen. Morstoel’s grandson, Trygve Bauge decided that his grandfather should have the opportunity of potential immortality and made the arrangements for his grandfather.

Bredo was kept at the Institute while Trygve searched for a suitable place to store frozen bodies. Grandpa Morstoel remained at the California institute until 1993 when his body was packed in dry ice, shipped to Nederland, Colorado, and stored in a garden shed.

Cryogenic suspension requires a body to be frozen immediately after death to ward off physical decay, then maintained in a frozen condition until medical science may be able to restore it to life. Suspendees are typically kept cool via liquid nitrogen, but due to budget constraints, “Grandpa Bredo” was kept on ice.

Born in Isfjorden, Romstel, in western Norway, on February 28, 1900, Bredo Morstoel married his wife Anna in the late 1920s, and the couple had two children. Working as the head of parks and recreation until his retirement in 1967, Bredo was fond of painting, fishing, hiking, and skiing.

In 1980, Morstoel’s grandson, Trygve Bauge, came to the United States to “be safe from nuclear war.” The unorthodox young man was long-haired, bearded, and enjoyed scoffing at authority, as evidenced by his many peculiar actions. Well known in the Boulder area, Bauge was convinced that bathing in ice water would prolong his life and founded the Boulder Polar Bear Club. He was arrested at the Stapleton Airport in 1986 for joking that he was going to hijack a plane and was arrested again in 1988 when he was caught trespassing on the Colorado University President’s property. 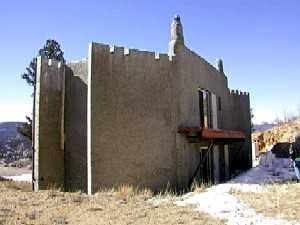 At some point, Trygve was joined by his mother, Aud, in Colorado and began to build a disaster-proof house in Nederland in 1993. The grey castle-looking house was to be a bomb, earthquake, fire, and floodproof house. Next to the sturdy structure was a small garden shed, where the pair moved their grandfather. Soon “Grandpa” Morstoel was joined by a body belonging to a man named Al Campbell from Chicago. Bauge had hopes of constructing a proper cryogenics storage facility. His mother Aud sold her father’s house in Norway to help support his business plan, but it was never completed. Bodies in cryogenic suspension are normally kept at about minus-320 degrees, but Morstoel and Campbell were held at a balmy minus -109°F.

For about six months, mother and son lived in relative anonymity until Trygve claimed that he would break the world record for ice bathing. Inviting all local newspapers, he immersed himself in a 1500-gallon tank of ice water in February 1994. Under the freezing water for one hour and four minutes, he did, in fact, break the world record.

But Tyrgve’s local visa time had run out, and the INS issued a deportation warrant for him. Declaring himself a fugitive from justice, he managed to evade authorities for a little while but was apprehended in the Spring of 1994 and sent back to Norway, leaving his mother Aud behind to finish the house and watch over the frozen bodies.

Aud was eventually given an eviction notice for having no electricity or plumbing. Afraid the frozen bodies would melt, she asked the local paper to plead her case to the Town Hall. When the reporter told the Town Clerk about Aud’s pleas, all hell broke loose. The Mayor, police, and press raced to the property, lights flashing. The shed was opened, and the bodies on ice were discovered. Within 24 hours, the news became an international event with reporters from all over the world arriving in Nederland.

An emergency town meeting was held, and an ordinance passed stating it is illegal to have “the whole or any part of the person, body, or carcass of a human being or animal or other biological species which is not alive on one’s property.”

Brought before the court for a 3 person Jury trial, Aud was found guilty of living in a building that had not gone through final inspection, changing the building’s use without a permit, and violating the town’s zoning code. Aud Morstoel was soon deported; the second frozen dead guy, Al Campbell, was reclaimed by his family, sent back to Chicago, and cremated. Nederland was not good-natured about Morstoel and wanted to bury him.

However, though Trygve Bauge was an ocean away, he kept the “fight” alive via Internet communications. Bauge aggressively publicized the problem in posts on cryogenics websites and e-mail lists. Eventually, cryogenics was explained to the Nederland town fathers, and the “Grandfather Clause” allowed Bledso Morstoel to remain in the shed. 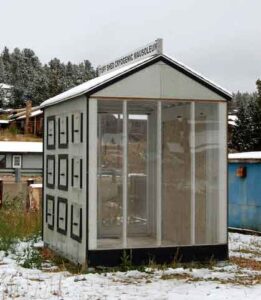 The town decided to give in and make a celebration of “Grandpa.” The shed, falling apart, was soon replaced by a building donated by Tuff Shed and the Denver Fox radio station. Morstoel now rests in an ice-encased aluminum casket enclosed in a large wooden crate stored in the shed. Bo “The Iceman” Shaffer, an environmental consultant, is Grandpa’s current custodian. Shaffer became acquainted with Trygve Bauge through internet communications. Once a month, Shaffer and two workers would take three-quarters of a ton of dry ice from Denver to Nederland, open the homemade freezer box, fill it with the ice, check Morstoel’s status, and then seal the shed back up again.  Brad Wickham, a Nederland resident, is currently entrusted with Grandpa Bledsoe.

Now, Nederland celebrates the Frozen Dead Guy Days Festival in the late winter every year. According to the Nederland Visitors Center, the public response has been “enthusiastic and near-frenzied beyond our wildest expectations.” Nederland came a long way from passing a special ordinance in an attempt to remove the body to hold a big festival in Grandpa’s honor. 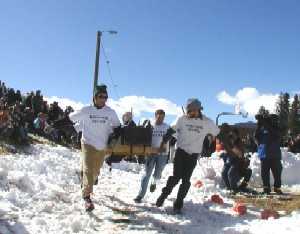 Grandson, Tyrgve Bauge, favors the festival, as a portion of the proceeds is directed towards Morstoel’s maintenance. The festival includes a tour of “Grandpa’s Shed,” a Grandpa Look-Alike contest, the Polar Plunge, Coffin Races, and dozens of bands performing in various tents at the festival and throughout town.

Nederland is located in western Boulder County, about 20 minutes west of Boulder and an hour and a half from Denver. Located at the crossroads of State Highways 119 and 72, the small town is near the center of the Peak-to-Peak Scenic Historic Byway. Nearby is Eldora Ski Area, dude ranches, fishing, camping, biking, hiking, and horseback riding. Central City and Black Hawk are just another 30-minute drive.