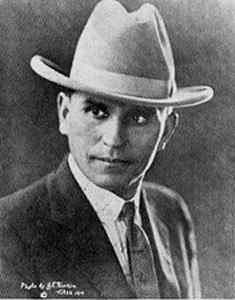 A nephew of the bandit queen Belle Starr, Henry Starr was known as the “Cherokee Bad Boy.”  Beginning his outlaw career in Oklahoma in 1892, his gang of bandits included such names as Kid Wilson, Frank Cheney and a laughing gunman known only as Happy Jack. The notorious gang robbed stores, train depots and banks in Arkansas, Oklahoma and Kansas.  In December 1892, Starr shot and killed U.S. Deputy Marshal Floyd Wilson, when the lawman tried to arrest him. By the summer of 1893, little more than a year after starting his notorious career, five of the seven-gang members were dead leaving only Henry Starr and Kid Wilson surviving.

On July 3, 1893, Starr and Kid Wilson were captured while vacationing at Colorado Springs with Starr’s new bride. Of the more than $20,000 already taken by the Starr gang, authorities recovered just $1,460 in greenbacks and $500 in gold. Starr was sentenced to hang for murder and robbery, but by 1904, he was back in Indian Territory, his sentence having been commuted by President Theodore Roosevelt.

Though Starr settled down for a time, when Oklahoma became a state in 1907, surrounding states tried to extradite him. Under the fear of being extradited to Arkansas, he hid in the Osage Hills quickly falling in with his old partners. After another wave of bank robberies, Starr was arrested and sentenced to 7-25 years in prison. He was paroled in 1913 providing he never set foot in Oklahoma again.

But, hiding out right under their noses in Tulsa, Oklahoma, the state suffered its worst string of bank robberies in 1914. Dozens of banks fell, with the robberies sometimes occurring with as little as two weeks between. In March 1915, Starr and his gang robbed two banks in Stroud, Oklahoma, but this time Starr was not so lucky – he was shot and arrested. Sentenced to up to 25 years, Starr was paroled just four years later.

When he got out of prison, he changed career directions, producing a movie about the Stroud robbery that was highly successful with two imitation flicks that quickly followed. Other movie companies began to call and ask him to stage bank robberies for him, which he happily complied with. However, he seemingly could not give up his first career choice. While filming at Stroud he robbed the bank at Chandler and then another in Davenport, Oklahoma. He was still negotiating with a California movie company when he was shot and killed while robbing a bank at Harrison, Arkansas on February 23, 1921. 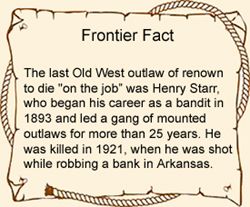 During Starr’s 32 years of crime, he claimed to have robbed more banks than both the James-Younger Gang and the Doolin-Dalton Gang put together – a total of 21 banks, making off with nearly $60,000.

The loot from Starr’s earlier crimes was, by his own words, hidden  “..near the border in a place nobody could find it in a million years.”  Many researchers believe that this cache is hidden somewhere along the Cimarron River in Stevens County, Kansas.

Stevens County is located in extreme southwest Kansas. There are two communities in Stevens County including Moscow and Hugoton, the county seat, which is located at the intersections of US Highway 56, and Kansas Highways 51 and 25.  Unfortunately, finding this treasure could be tough in the approximately 729 square miles that the county encompasses. However, the Cimarron River is located only in the extreme northwest portion of the county, which might be worth exploring.