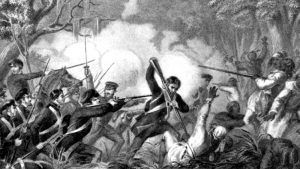 Cantonment Clinch was an army fortification in Pensacola, Florida. The post was built in 1822 at the head of Bayou Chico by men led by Brevet Colonel George M. Brooke during the First Seminole War. Originally called Camp Hope and then Camp Brady, its initial function was to house United States troops during a yellow fever epidemic in Pensacola and at Fort Barrancas.

The post, located three miles west of Pensacola, included ten log barracks and ten quarters for officers, arrayed around a large parade ground. Around the fort, grew a small town of about 180 households, with about one-third of the population of mixed race, reflecting its Creek Indian, European, and African residents, and their descendants. In 1823, the military renamed the post as Camp Galvez Spring, and later that year, as Cantonment Clinch, after a beloved Colonel, Duncan L. Clinch.

The US Army likely drew from these forces in local wars against the Pensacola and Creek tribes, as well as early Seminole Wars. The US military also used their troops to construct roads to other military facilities in west Florida and adjacent portions of Alabama. The post was abandoned in October 1834 and the troops were evacuated to Baton Rouge, Louisiana.

The fort was located in present-day West Pensacola, Florida. There are no remains today.