Joaquin Murrieta was a legendary figure in California during its Gold Rush days of the 1850s. Depending on a California pioneer’s point of view in the mid 19th century, Joaquin Murrieta was described by some as a Mexican Patriot, while others would say he was nothing but a vicious desperado. When he tried to make his living in mining, he forced off his claim. Angry about this, he then turned to a life of crime and was seen by some as a Mexican patriot, resisting the white settlers’ domination. Others saw him simply as a bandit. Murrieta became the leader of a band called The Five Joaquins, who were said to have been responsible for the majority of cattle rustling, robberies, and murders that were committed in the Mother Lode area of the Sierra Nevadas between 1850 and 1853. One of those robberies was a wagonload of gold that the Joaquins had stolen from the northern mines. However, when members of Murrieta’s gang were driving the load along the hills east of the old Carrizo Stage Station they were ambushed by Indians.

According to the tale, the gold, as well as other items taken from the gang, were hidden in an old burial cave under a projecting rock ledge. No doubt Murrieta would have soon gone after the lost loot, but he was killed by the California Rangers before he could retrieve the gold. The Old Carrizo Stage Station which once served the Butterfield Stage Station is located in the Anza Borrego Desert.

Another treasure that Murrieta was said to have buried is thought to be located between Burney, California and Hatcher Pass. The $175,000 cache, said to be hidden not far from Highway 299, has never been found.

Yet another stolen Murrieta cache, worth some $200,000. is said to be buried somewhere between Susanville and Freedonyer Pass near today’s Highway 36.

Murrieta and his gang were often known to hide their stolen loot in the area of their robberies. On one occasion Murrieta and his right-hand man, Manual Garcia, known as “Three-Fingered Jack,” robbed a stagecoach along the Feather River. The strongbox was said to have contained some 250 pounds of gold nuggets worth $140,000 at the time. Allegedly, the pair buried the strongbox on the banks of the Feather River in a canyon a few miles south of Paradise, California. According to Wells Fargo officials, the stolen gold has never been recovered. Read our full article on Joaquin Murrieta here.

Allegedly, a stage was traveling from El Paso, Texas to San Diego with a box of gold coins in the 1860s. In addition to the driver, the stage also carried a guard to protect the money. However, when the stage reached Yuma, Arizona, the guard fell ill and the driver continued on without him. Somewhere in the area of Carrizo Wash, between the Fish and Coyote Mountains, the stage was held up by bandits, who killed the stage driver and fled with the box of gold. According to the tale, the outlaws buried the gold on the south slope of Fish Mountain but were unable to retrieve it because there were so many soldiers in the vicinity. The buried coins are said to remain there to this day.

In addition to this stolen cache, others are also said to be buried near the Vallecito Station, and numerous lost gold mines are allegedly in the area including the Lost Bell Mine, The Lost Bill Williams Mine, and the Lost Squaw Mine. Vallecito Station is now located in the Vallecito Regional Park in San Diego County.

In March 1881, when a freight wagon carrying several hundred pounds of gold ore was traveling through Modoc County, it was stopped by a lone bandit. The ore from Nevada was destined for Sacramento and heavily guarded by three men. But, this did not stop the outlaw named Holden Dick. Immediately killing two of the three guards, he forced the stage to stop and the remaining guard and driver quickly surrendered. Ordering them down from the stage, he sent them walking in a southerly direction. In the meantime, he boarded the wagon, tied his horse to the back and drove north where he was said to have buried the loot on the western slope of the Warner Mountains.

The vicious crime went unsolved for years until a Pitt River Indian known as “Holden Dick” began to trade small amounts of gold ore in Susanville and Alturas. In between appearing in the saloons of mining camps, spending his money freely, the Indian would disappear into some of the most rugged sections of the South Warner Mountains, only to return again with a goodly supply of gold ore.

At first, the locals thought that the Indian was working a secret mine, and when in the saloons, they would try, without success, to get him to talk. They also began to follow him when he left, hoping to find the mine. On one occasion, when another miner named Samuel B. Shaw was badgering the Indian for the location of his gold, Holden got fed up and shot the man, wounding him fatally.

Holden Dick was soon arrested for Shaw’s murder and locked up in the Susanville jail. On January 23, 1886, four men stormed the jail and dragged him into the street. Beating, whipping and torturing the man, he refused to tell the location of his hidden cache and was finally hanged at the blacksmith shop. 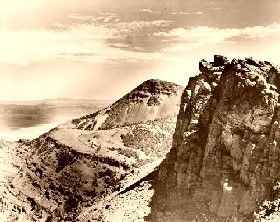 Somewhere along the line, the authorities figured out that the gold ore so freely bandied about by Holden did not come from a mine, but rather, was the stolen loot taken from the freight wagon some five years previously.

After a little more “digging” the cache is believed to have been hidden in a cave where Holden Dick lived most of the time. The cave was located in one of the many canyons which extend from Eagle Peak on the western slope of the southern Warner Mountains. He was also said to have constructed a crude rock wall at the cave’s entrance, though today it would most assuredly be collapsed. It is most likely that the cave would be located in the lower elevations of the mountains since the Indian lived there year-round.