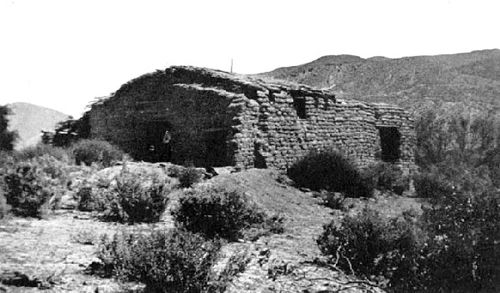 The original Vallecito Stage Station was built about 1851

Not only is the Vallecito Stage Station, in San Diego County, a California Historic Landmark, it is also reportedly haunted.

Located on the west side of the forbidding Colorado Desert, the name “Vallecito” means “Little Valley,” which dates back to the times when the Spaniards were exploring this vast land. The valley, with its natural spring and grasslands, was a welcome relief to travelers after crossing the desert, which they called “The Journey of Death.”

Originally the valley was Indian lands which they called “Hawi.” The first European to visit it was the Spanish Captain, Pedro Fages, in 1781.

The road through the valley was the only wagon road into southern California and during California’s Gold Rush days, thousands of prospectors passed through Vallecito, refreshing both themselves and their animals.

About 1851, a pioneer by the name of James R. Lassiter saw an opportunity in the valley and established a store and campground to accommodate the many emigrants. His home and outbuildings were made of sod cut from the plentiful ciénega (saltgrass).  Soon, other pioneers built homes and businesses in the valley to serve the many travelers.

In 1854, two men by the names of Samuel Warnock and Joseph Swycaffer, implemented the first regular mail route in southern California. The semi-weekly horseback delivery between San Diego and Yuma, Arizona made Vallecito a regular stop along its route. In the fall of 1857, the nation received its first overland Atlantic to Pacific mail service when James E. Birch’s San Diego-San Antonio mail began operation. The forerunner of the Pony Express and the northern stage lines, it was known as the “Great Southern Overland, ” but more familiarly called The Jackass Mail.

In addition to being a regular mail stop, it also became an important resting place for Army detachments traveling to and from California. In 1858 it was made one of the stops of the famous Butterfield Overland Stage Route that traveled between Missouri and San Francisco. With the new passenger service, Vallecito soon became a place of prominence as hundred of travelers utilized the valley as a resting place.

Though a welcome relief after days of exhausting travel through the desert, the stage station also had its dark side. Like numerous other places of the Old West, the station was witness to murder, robberies, and daily human miseries.

It is from this darker side, that the station allegedly became haunted by the spirits of those who had met their death there — natural or otherwise.

One of the ghostly tales is the specter of the White Horse of Vallecito that allegedly began with a stage robbery long ago. When the stage was traveling on its way to Vallecito Station, four men on horseback held it up just before it reached Carrizo Wash. With guns pointed at the stage, the driver gave up a box containing some $65,000 and the bandits immediately fled.

However, as they were fleeing, the stage driver fired one shot, hitting one of the bandits. Once the rest of the robbers were gone he carefully approached the man he had shot and was surprised to find not one, but two dead bandits. The driver concluded that the gang leader had perhaps shot one of his own men in order to keep a greater percentage of the loot.

The two remaining bandits rode on towards Vallecito Station, stopping somewhere in between to bury their ill-gotten gains.

When they arrived at the stage station, they stopped for food and drink and while there began to argue. According to the tale, the bandit leader then excused himself for a moment, promising to continue the discussion when he returned. A few moments later, he rode through the doorway mounted on his big white stallion and shot the other bandit. However, as the wounded man returned fire and the leader fell dead from his horse. Spooked by the blasts of the guns, the white horse ran through the door and out into the nearby hills.

Today it is said that the ghost of the White Horse continues to roam the hills near where the bandits buried their loot. Usually appearing around midnight, the White Horse seemingly appears out of nowhere, before galloping through the sand and disappearing once again.

Two more ghosts who are said to lurk about the old stage station are two old Texas emigrants named Buck and Roland who were allegedly both killed in a duel with each other.

In the Carrizo Wash area, there is supposedly a phantom stagecoach that has been spied numerous times over the last century.  Pulled by four mules, the ghostly stage lumbers along the old Butterfield Stage Road carrying no passengers but driven by a spectral figure.

According to the legend, the stage was traveling from El Paso, Texas to San Diego with a box of gold coins in the 1860s. In addition to the driver, the stage also carried a guard to protect the money. However, when the stage reached Yuma, Arizona, the guard fell ill and the driver continued on without him. Somewhere in the area of Carrizo Wash, between the Fish and Coyote Mountains, the stage was held up by bandits, who killed the stage driver and fled with the box of gold. After the robbery, the stage, along with its dead driver, continued on toward Vallecito Station before disappearing, never to be seen again.

Since then, the phantom stage is said to continue its journey on moonlit nights, hesitating briefly at the site of the old Carrizo Station, before continuing on its way and out of site. The next morning, the prints of wagon wheels and horses can be seen in the sand.

Vallecito’s most “famous” ghost is that of the “White Lady of Vallecito.”  When she arrived on the Butterfield Stage, sometime in the late 1850s, she had taken ill and had to be carried into the station. From somewhere back east, she was on her way to  Sacramento, where her fiancé had struck it rich in the Sierra goldfields. Young and frail, her name was Eileen O’Conner, and she was taken to a bed in the back of the station and cared for over the next two days. Despite the best attempts of those tending to her, she died. When the station staff went through her traveling trunk they found her white wedding dress in which they dressed her and buried her in an unmarked grave. But evidently, she was not ready to “go,” as almost from the beginning people have said that she paces restlessly about the old station site, waiting for the stage to take her to Sacramento. Today, her grave, along with two others, are in a small cemetery (Campo Santo) near the old stage station.

Another anomaly of the area is strange balls of light which are seen on Oriflamme Mountain, just north of the Vallecito Station. On dark nights, numerous people have reported seeing mysterious “ghost lights” that bob over the slopes of Oriflamme (“French for golden flame”) Mountain. The first recorded account of the ghostly balls was reported in 1858 by a Butterfield Stage driver.  After that first report, more came in from soldiers, prospectors, and explorers traveling in the area.  Not only were they seen near Oriflamme Mountain, but also over Borrego Valley and in other nearby areas.  In the 1880s, travelers said the “burning balls” were so bright that the lit up the night sky like fireworks over the Vallecito Mountains. 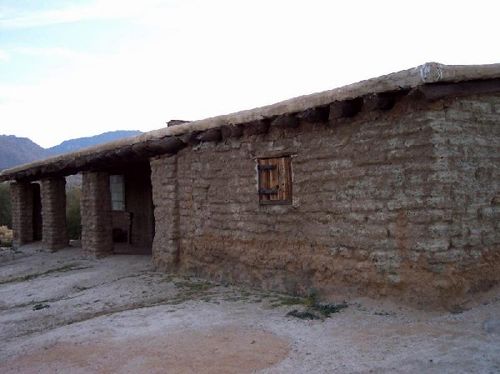 Maintaining the history and the legends, the old stage station has been preserved in the Vallecito Regional Park in San Diego County. The present building, built in 1934, is a reconstruction of the original Vallecito Stage Station. In addition to preserving history, the park also offers modern-day campers and picnickers a quiet place to enjoy the desert. The park is located on County Road S-2 about four miles northwest of Agua Caliente Springs.