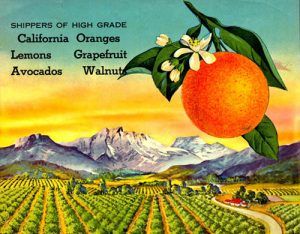 Though you actually meet the beginnings of the urban sprawl in San Bernardino, from there forward, it progressively gets more congested as you near Los Angeles. Like other large cities on Route 66, such as Chicago and St. Louis, many of the vintage era businesses have been taken over by new development. However, given the growth of America’s second-largest city and its suburbs, there remains a surprising number of historic icons if you know where to look. Taking your time through the many cities forming the 60-mile stretch to Los Angeles will provide a number of picturesque motels, restaurants, signs, and museums for those along the trek of the Mother Road.

When Route 66 began, its purpose was to connect the small towns between Chicago and the Pacific Coast, and at that time, most of the Los Angeles suburbs were small towns, filled with mom and pop diners, motels, roadside fruit stands, and curio shops.

But in the rush to California, for which Route 66 was partially responsible, the area boomed as travelers escaped the dust bowls of the Midwest, attracted to the climate and opportunities that the Golden State provided.

Dedicated Route 66 fans can still travel along the original road, as the path continues to exist along various thoroughfares all the way to Santa Monica, snaking through suburbs that pass seamlessly one into the other. From San Bernardino to Pasadena, the route travels along Foothill Boulevard, which is now designated as California State Highway 66. Traveling through the suburbs of Fontana, Rancho Cucamonga, Azusa, Monrovia, and more, there are several remaining vintage icons that can still be found between the strip malls and fast-food restaurants. However, you will need to keep aware of the city signs to know when you have passed from one suburb into the next.

From Pasadena to Santa Monica, Route 66 is 80miles of city streets through Los Angeles variously known as Foothill Boulevard, Colorado Boulevard, Huntington Drive, Sunset Boulevard, and Santa Monica Boulevard until you reach the western end of the Mother Road at the Pacific Ocean. If you plan to take the original route, estimate a full day of frustrating traffic bogs and traffic lights before reaching your destination.

On the other hand, if your goal is just to make the end of America’s Main Street USA, you can take I-10 from San Bernadino all the way to Santa Monica. Or, better yet, try a combination of streets along the outskirts, transferring off and on the highways if your frustration level reaches its peak. 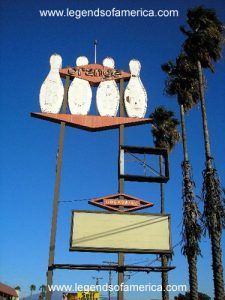 Rialto’s “Orange Bowl” has long lost its game by Kathy Weiser-Alexander, December, 2005.As you begin your trek along the old route, you’ll first come to the San Bernardino suburb of Rialto, that was once known for its many lemon and orange groves.

The suburb, which now sports a population of nearly 100,000 people in its 4 by 8 ½ mile area, began as one of many small towns that were built along the railroad in 1887. When the railroad line was extended between San Bernardino and Pasadena by the Santa Fe Railroad, 25 town sites were located every 2,600 yards, one of which was Rialto.

In that same year, a group of Methodists arrived in the area planning to build a new college. Though the school was never built, these first citizens formed the new town. By 1893, there were 6 businesses, a school, and 35 homes in the fledgling settlement.

In the early part of the 20th century, the area became known for its citrus groves and at one point supported seven packing plants that were kept busy shipping products all over the country. As the town’s population continued to grow the citrus groves were gradually taken over by homes and new businesses.

Though much of Rialto is “new” there are still several Route 66 era businesses that can be seen, the most famous of which is the infamous Wigwam Motel, which used to rent its rooms by the hour with a sign displaying “Do It In a Teepee.” Serving Route 66 travelers since 1947, these teepee-style cottages have recently gone through a total makeover, including improvements to both the buildings’ interiors and exteriors as well as the motel’s landscape. Right at the city’s eastern edge, the Wigwam Motel is located at 2728 W. Foothill Boulevard. 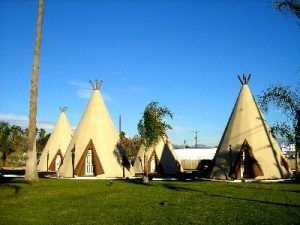 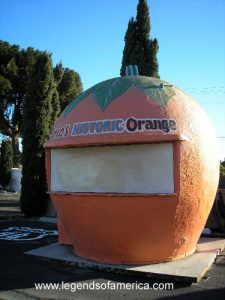 During Route 66 heydays, these popular oranges stands
dotted the Mother Road. Today, this is the last surviving one. Kathy Weiser, December, 2005.

Still some sixty miles to the east of Los Angeles, you will merge from the suburb of Rialto into the city of Fontana. Originally part of a large Spanish Land Grant, Fontana was officially formed in 1913 by A.B. Miller who built the town into a diversified agricultural area with citrus, grain, grapes, poultry, and swine being the leading commodities. The settlement continued to be agriculturally based until Fontana was selected as the site for a steel mill in 1942. A decade later, with a population of nearly 14,000 people, Fontana had become Southern California’s leading producer of steel and related products.

Over the years, Fontana grew quickly and today continues to produce steel products as well as being called home to several other industrial facilities due to its excellent transportation network. Though it now boasts more than 150,000 people, several Route 66 icons can still be seen in Fontana, including several old motor courts on both sides of the road. Long past their prime, the El Rey, Rex, Dragon, Sand & Sage, Rose and Sunset Motels speak of better times along this old stretch of the highway. This being said, Fontana is currently working with the Route 66 Corridor Preservation Program to improve and promote their piece of Route 66 and the continued use of these many historic motels.

At the southwest corner of Foothill Boulevard and Sultana Avenue sits a classic Italian restaurant called Bono’s that served thousands of Route 66 travelers over the years. Unfortunately, as of this writing, Bono’s is closed and the building is for rent. Right next to it, however, you can see the last of many orange juice stands that once dotted all of California’s Route 66. 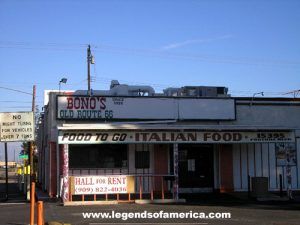