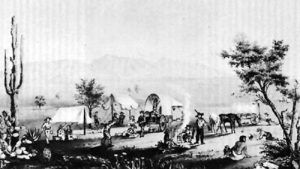 “We were in the domain of the dreaded Indian, with rivers to ford and deserts to cross before we would reach civilization again. Cholera was claiming its victims on the trail before us, but the lure of gold urged us on. “

Following James Marshall’s discovery of gold at Sutter’s Mill in January 1848 more than 80,000 men would set off for California within the year. More would come from around the globe. By January of 1850, the era of the ’49er had passed within a single year. With the Gold Rush at its pinnacle, 1851-52 were halcyon years. But, as some disgruntled miners returned home in the east with little more then nothing in their pockets, settlers from the east were making their way west to California in ’52. Unlike the ’49ers who were miners, these pioneer settlers came with their families. They were farmers, merchants, and others who saw opportunity in California.

Among those first wagon trains to head out to California was a family from Galena, Illinois. Miss Pauline Wonderly was just fifteen and recorded her family’s perilous journey into the frontier. Her passage is a real-life saga of life and death. It is a story of survival, of murder, massacre, and disease. But it is also a story of births, simple pleasures, and new beginnings. 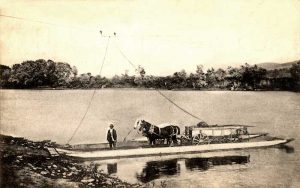 Wagon crossing a river on ferry.

Pulling out of Galena on April 15, 1852, Pauline’s outfit consisted of four men, her father, uncle and two others. Her mother and both brothers, one eight the other two. They left in two light wagons with four yokes of oxen and two cows. It was, “Hangtown or Bust!” As there was little room in the wagons it was decided that Pauline would walk, which is exactly what she did, except at streams and rivers.

After crossing the Mississippi River by ferryboat into Iowa the outfit got mired down in snow nearly making the road impassable. Creeks and rivers were swollen and rising making fording impossible. The wagons were broken down and floated with passengers and belongings across the raging waters by a heavy rope. Miss Wonderly wrote: “We sat in the wagon bed, very much relieved when we reached the other side.”

One month out of Galena on May 12th the small pioneering party arrived at Council Bluffs, and Pauline noted: “This Mormon settlement was the last civilized place we were to pass through.”

Ten days out of Kanesville, Pauline’s outfit arrived upon the scene of the Elk Horn Crossing Massacre. “They [Indians] were burying their dead when we arrived. We were very much frightened for fear they would take vengeance on us, but they retaliated in their way by burning the bridge,” she wrote.

Note: The Elk Horn Crossing Massacre was carried out by whites in an earlier train who refused to pay the Indians a reasonable toll of 25 cents per wagon to cross the Indian built bridge. Eleven Indians were murdered.

Fearing Indian attack several small outfits were joining larger trains Pauline’s family joined Captain Meeker’s train along with another party, the Bundy family with eight children bound for Oregon. The Bundys remained with the train until they thought it safe to go ahead as they had horses and could move much quicker. Within days, the Bundys were dying off from cholera, first to go was Mr. Bundy followed by his eldest and youngest daughters, all laid to rest along the trail. Heartbroken, Mrs. Bundy continued on alone with her remaining children for the Oregon frontier.

Traveling through Nebraska on June 7th Pauline’s Mother gave birth to a baby girl. The family pulled out of the train long enough for the birth but had soon rejoined the group. Along the trail they passed by an encampment of men many dying of cholera, passing through Devil’s Gate, Wyoming on June 30th.

With a newborn in her mother’s charge, Pauline took over the cooking and laundry. Misfortune carried off one wagon and kitchen utensils down the swollen crossing at Green River, but with load lightened they arrived at Soda Springs on July 18th. The following day they left the Oregon Trail behind and took the branch for California, reaching Goose Creek, Nevada on the 30th. 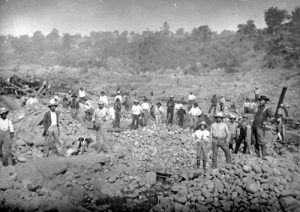 From August 5th through the 24th the small caravan would cross and re-cross the Humboldt River a total of 13 times. With spirits at their lowest, provisions nearly were gone, animals exhausted and their wagon ready to fall apart the party now faced the desert. It was the last 26 miles before they pulled into Rag Town [Carson City] that Pauline mentions in her journal: “The whole length of the trail was marked by abandoned wagons, bodies of animals, especially of horses, furniture, cooking utensils, in fact, whole outfits. Graves also dotted the way.”

At Rag Town the family sold their cattle and bought provisions, arriving in Hot Springs [Genoa] August 30th. They began their ascent over the Sierra’s on September 2nd, several in the party split at the Ringgold Trail leaving only two outfits from the original wagon train, the Wonderly and Unger party who continued on to Hangtown, arriving on the evening of September 10th.

Pauline recalls seeing her first Chinaman and settling in Diamond Springs. Later she would be reunited with the Schneider family who’d taken the Ringgold cut off on September 2nd. They were operating a hotel at Ringgold. In time her family would settle at Missouri Flat. During her early years in El Dorado County, she witnessed the fires of 1856 which devastated Placerville and Diamond Springs. She also mentions the tragic murder of Susan Newham by Jeremiah Crane and the Ringgold lynch mob that sought justice. But that’s another story. 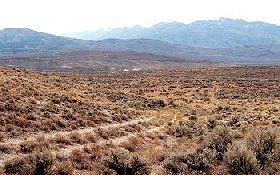 Source: Wonderly, Pauline, Reminiscences of a Pioneer (Placerville, Ca., El Dorado County Historical Society, 1965) edited by John Barton Hassler. About the Author: Anthony M. Belli is a native of California currently living in the Sierras of El Dorado County. Having a background in law enforcement, he was the youngest police chief in Oregon history. Now, Belli is a recognized historian, writer, and lecturer on the California Gold Rush, and serves on the research staff for the El Dorado County Museum. He has been featured in a number of television programs, writes for Lost Treasure Magazine, wrote the book Mysteries of Tahoe – Lost Treasure, and is currently working on a second book.