A settlement began here in January 1800 when George Frederick Bollinger, a Swiss-German immigrant from western North Carolina led about 20 families to the area. 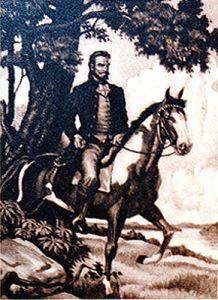 In 1796, Bollinger had come to the midwest with a friend and by 1797 he was exploring the Mississippi River region in the Cape Girardeau District. At that time, the district was under Spanish control and Bollinger established a friendship with Don Louis Lorimier, the Spanish Commandant of Cape Girardeau. Lorimier encouraged Bollinger to return to North Carolina and bring more settlers to the area. As an incentive, Lorimier promised a land grant to Bollinger and the new settlers with a couple of conditions. Bollinger was required to sign a document that he would return with several families, all of whom were to be Catholic.

Bollinger then returned to North Carolina and began to recruit other Swiss and German immigrant families that wanted to move westward. After the autumn harvest of 1799, 20 families set out from their farmsteads in North Carolina for the Missouri frontier.  With George Bollinger, were his four brothers, John, Daniel, Philip, and Mathias; two nephews William and Henry Bollinger, and several friends and neighbors.

Pulling their belongings in covered wagons and carts pulled by horses, oxen, and human hands, they arrived on the east bank of the Mississippi River in December across from Ste. Genevieve, Missouri, where they set up camp to wait for the opportunity to cross the formidable river. For two weeks they waited until the ice was thick enough to support the teams and loaded wagons. Finally, they crossed and made their way to the Whitewater River near present-day Burfordsville. 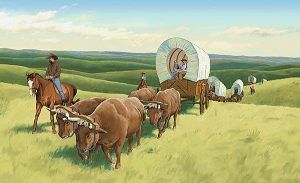 Though most of the pioneers were members of the German Reformed Church, and none were Catholic, Don Louis Lorimier, impressed by Bollinger on his earlier visit, was willing to bend the rules for the settlers.

Upon their arrival, each of the 20 families received several hundred acres, and their village became known as the “Dutch Settlement.” Bollinger’s 640-acre parcel of land was along the Whitewater River. Unfortunately, his wife, Elizabeth, died in 1801 and George was left to raise their only child, Sarah, alone.

In 1803, the United States made the Louisiana Purchase and the land was officially transferred to the United States in 1804. Bollinger then built a log dam, a log mill, and a blockhouse on his property. Bollinger’s two slaves helped produce agricultural crops and cared for the livestock. He also persuaded a German Reformed minister in North Carolina to join his group on the frontier. 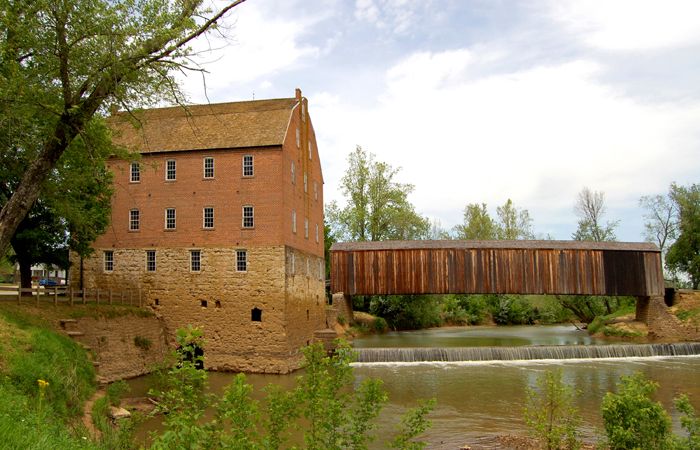 Bollinger Mill and the Covered Bridge in Burfordville, Missouri by Kathy Weiser-Alexander.

In 1806, Bollinger was one of the first assessors to levy taxes for the Cape Girardeau District. At the same time, his mill had become a success. When Missouri became a second-class territory in 1812, Bollinger was elected as a member of the new territorial assembly where he served multiple terms and helped to establish local governments in the area. Territorial governor William Clark also appointed him lieutenant colonel of the Fourth Regimental Militia.

In the next years, Bollinger and his extended relations accumulated substantial property holdings along the Whitewater River and his success allowed him to send his daughter back to Salem, North Carolina for schooling at the Moravian Academy.

In 1819, author and missionary Timothy Flint visited Bollinger’s Dutch Settlement and recorded his revulsion at so many domestic distilleries and the prevalence of homemade liquors. Flint concluded, however, that the Germans worked hard, had productive orchards, built solid buildings and fences, and dramatically improved the land.

In 1820, Bollinger’s Mill prospered further by a road that was built between Jackson westward to Greenville. By that time, his mill had become the largest and best in the area. That same year, Bollinger was elected to the new Missouri State Senate and would continue to play a role in politics for more than a decade. 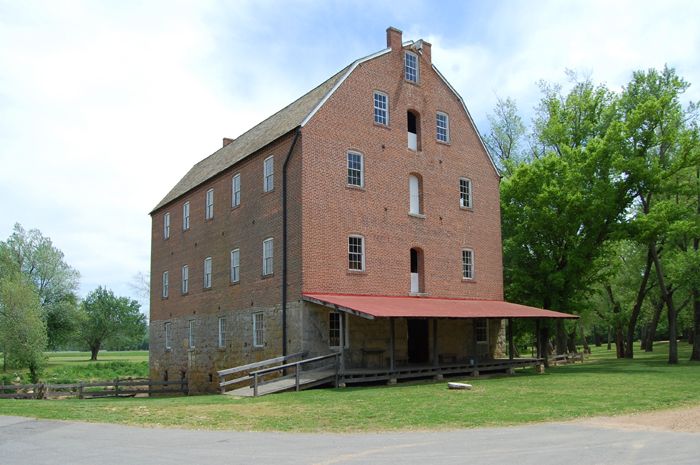 The Bollinger Mill was rebuilt in 1867, photo by Kathy Weiser-Alexander.

By this time, most people referred to the settlement as Bollinger’s Mill. Bollinger soon added a distillery and blacksmith shop and in 1825, he replaced his earlier wooden structures with a stone dam and building foundation and added a wooden upper story to the mill.

By 1830 Bollinger owned 13 slaves, in addition to the six free blacks who resided in his household. Soon he almost tripled his slave ownership and as his resources continued to increase, so did his purchases of land in the region.

Bollinger died September 23, 1842, and was buried in the Bollinger Cemetery in present-day Burfordville. He left all his assets to his daughter. Afterward, his daughter, Sarah Bollinger Daugherty and her sons continued to operate the mill until the Civil War, when the mill was burned by the Union army in order to prevent the supply of flour and meal to the Confederate army. Only the stone foundation survived.

In the meantime, the county began construction on a covered bridge over the Whitewater River in 1858 but was delayed several years by the Civil War. 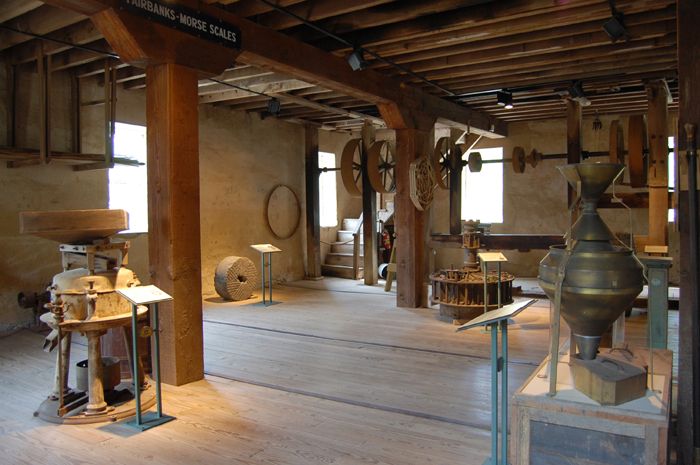 Interior of the Bollinger Mill in Burfordville, Missouri, Kathy Weiser-Alexander.

After the war, the family sold the mill ruins and 640 acres to Solomon R. Burford in 1866. The next year, Burford built a new mill on the site of the existing 1825 limestone foundation. This four-story, stone and brick structure is the mill that continues to stand today.

In 1868, construction was completed on the bridge that had been started a decade before. The 140 foot long covered bridge was constructed by Cape Girardeau builder Joseph Lansmon from nearby yellow poplar trees as part of the Macadamized Road Company toll road. This road and bridge became a vital link, especially to farmers driving wagonloads of grain destined for the mill. This toll-road system between Burfordville, Jackson, and Cape Girardeau continued to operate as a private business with a toll booth at the east end of the bridge until 1906. At that time local farmers, tired of waiting for the courts to abolish the tolls, broke down the gates and used the roads without paying.

In 1869, a post office was established and the town’s name was officially changed to Burfordville.

Solomon Richard Buford continued to own the mill until 1897 until he sold it to the Cape County Milling Company, which operated the mill until 1953 when it was sold to the Vandivort family, relatives of George Bollinger. 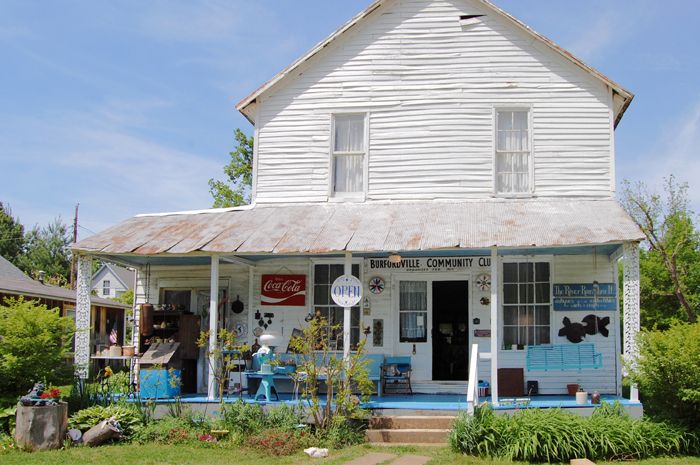 The Vandivort’s, interested in seeing the mill preserved, donated it to the Cape Girardeau County Historical Society in 1961. In 1967, the historical society donated the Burfordville Covered Bridge and the adjacent Bollinger Mill to the State of Missouri. Today, both the mill and the bridge are listed on the National Register of Historic Places

The Burfordville Covered Bridge is one of four covered bridges that survive in Missouri today. Open to pedestrian traffic only, it is part of Bollinger Mill State Historic Site. The side-by-side historic structures provide an excellent setting for artists and photographers. Guided tours of Bollinger Mill are given daily and include a demonstration of corn milling if water levels allow. The site also features a tree-shaded picnic area, a quarter-mile of stream bank, fishing in the Whitewater River, and a historic cemetery where the remains of George Frederick Bollinger and members of his family rest. The historic site is open year-round.

Burfordville is located about eight miles west of Jackson on Route 34. 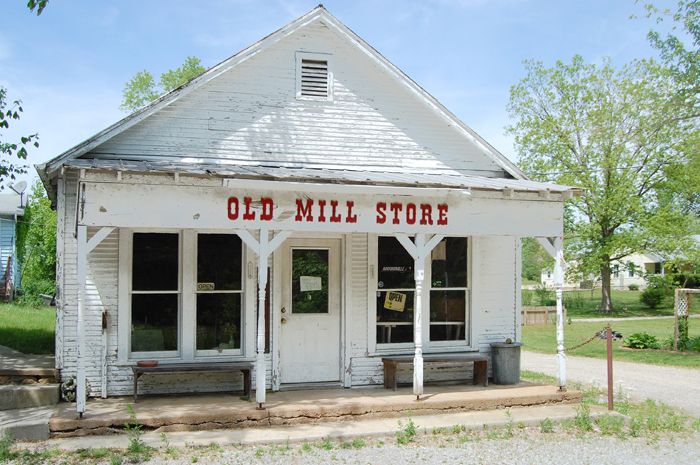