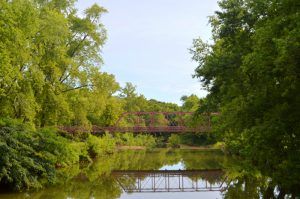 Old Appleton, Missouri, located on the south bank of the Apple Creek in Cape Girardeau County, got its start in the early 1800s.

In the 1780s, a man named Pierre Louis Lorimier, a French Canadian who had worked as an Indian-interpreter for the British during the American Revolution, found it in his best interest to leave the American states. He, along with his wife, who was of mixed French and Shawnee Indian ancestry, settled at Cape Girardeau in present-day Missouri.

Lorimier was subsequently made the Indian Agent by the Spanish colonial authorities, who controlled the region at that time. Like Lorimier, the Shawnee and Delaware Indians who had sided with the British were also in an unsavory situation and were being pushed off their lands by American settlers. Lorimier appealed to the Spanish for land grants for the Indians and two large land tracts were granted in the Apple Creek watershed, with the intention of the Shawnee and Delaware acting as a buffer against the Osage Indians, who were not on friendly terms with the Spanish authorities. 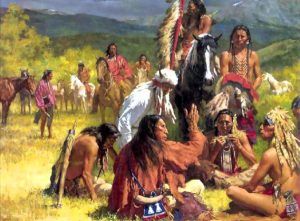 Lorimer then convinced 1,200 Shawnee and 600 Delaware to relocate to the region, who arrived 1784 and settled in the area of Old Appleton. Through here ran the El Camino Real, or the King’s Highway which would soon connect New Madrid and St. Louis. This pathway followed Native American trails and crossed Apple Creek at or near the future site of Old Appleton.

The “Le Grand Village Sauvage”, known to the Americans as the Large Shawnee Village was to the west of present-day Old Appleton and ran northward for about a mile toward Uniontown. Another Indian town called “Petit Village Sauvage” was to the east of Old Appleton. Both villages had a significant amount of racial mixing with the French and had largely adopted French and American ways and lifestyles. They soon built granaries to store their crops and barns to house their cattle and horses. They built their log homes in the French fashion with posts set together and interstices filled with clay, topped with wood-shingled roofs.

By the early 1800s Kentuckians and German immigrants began to settle in the area that provided fertile farmland and good proximity to water along Apple Creek. Although the Americans had agreed to honor Spanish treaties made with local tribes, these were ignored as more and more people moved to the area. As the emigrants encroached upon the Shawnee and Delaware lands around Apple Creek, they requested protection from the Osage tribe.

In 1809, harassment and stealing by American settlers drove the Shawnee and Delaware to visit the territorial governor Meriwether Lewis where they agreed to exchange their lands in the Apple Creek watershed with lands farther west. However, nothing was done at the time. But by 1815 the situation had worsened so much that territorial governor William Clark and US President James Madison ordered all white intruders removed from Shawnee and Delaware lands. However, this order was impossible to enforce and was ignored. The next year the Indians were relocated to lands further west. By 1825, all remains of the village had disappeared, but the Americans long continued to refer to the site as Indian Village.

In the meantime, more settlers moved in and a post office was established in 1818 called Apple Creek for the many adjacent crab apple trees. In 1824, two settlers by the names of John McClain and John Schatz arrived and began to establish a town. During this decade, Alfred McClain constructed a dam across Apple Creek to power a gristmill he built on the northern bank of the creek. The first general store was opened by Kimmel and Taylor in 1829. 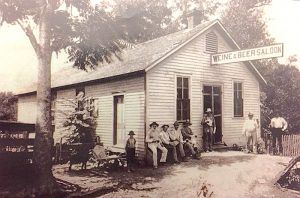 The town was officially platted in 1847 and in 1856 the town’s name was changed to Appleton. In 1856, Casper Ludwig, a German immigrant, built a brewery and saloon near the creek in Appleton. His brewery produced a beer called Kulenbacher, which was quite popular at the time.

The town was nicknamed “Shakerag” during the Civil War. This was due to the fact that window glass could not be obtained at this time and window frames were covered with cloth which were soon shredded with the wind, and the flapping rags were referred to as shakerags. 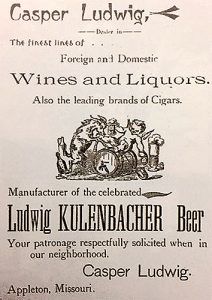 In 1879, a three-span truss bridge was built over Apple Creek which greatly helped area residents. This area was a low lying flood plain where the waters often rose. The bridge was built along the road to Jackson, some 16 miles to the south, which allowed area residents to move more easily for commerce, socialization, and farm needs. From Jackson, it was just another 10 miles to Cape Girardeau.

In the late 1800s, a physician named Wilhelm Aaron Schoen began practicing in Appleton. In 1899 he married Bertha Ludwig, the daughter of brewery owner Casper Ludwig. Caspar Ludwig died in 1901 but his brewery continued until 1904. Afterward, the brewery operated under several owners. By 1906, it was called the Appleton Brewing Company, and in 1908, it became the Appleton Brewing and Ice Company. 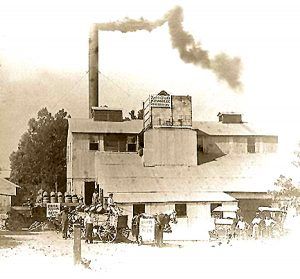 The Appleton Brewing & Ice Company in Old Appleton, Missouri in 1914.

In 1917, the town’s name was changed again to Old Appleton by the postmaster general to remedy delivery confusion with Appleton City in St. Clair County. Though the town never grew very big, it once boasted a distillery, brewery, blacksmith shop, soda water plant, creamery, hotel, bank, and garage. In 1920 it had a population of 106. That same year, Prohibition began, but the brewery continued to operate. During the next decade, it would be raided several times by federal agents, who smashed bottles, opened kegs, and spilled the beer. According to local history, townspeople ran with their buckets to catch the foam before it spoiled.

After Prohibition ended in 1933, the Appleton Brewery and Ice Company continued to operate until 1934. That year, a brewery was operated by a former prizefighter and bootlegger named Benny McGovern. Whether this brewery was the old Ludwig Brewery or a different one, we were unable to determine. In any event, it operated as McGovern Brewing from 1934-1938. That company’s label was Mule Beer that was based on a real mule named Dan that was maintained by the brewery. During its time of operation, brewery representatives would take the mule to various taverns and ask the bartender to open different brands of beer and place them on the bar, and Dan would sniff out the McGovern beer and drink it! 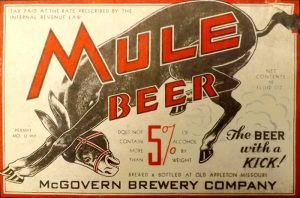 Mule Beer by the McGovern Brewery in Old Appleton, Missouri

From 1940 to 1947, the Appleton Brewery Company was operating again. In the meantime, the old McClain Mill on Apple Creek continued to grind wheat into flour until World War II and afterward continued to be utilized for feed griding for a period of time until it finally closed.

In 1950, Old Appleton reached its peak population of 120. Soon afterward, the old McClain Mill was beginning to deteriorate and in the next decade, efforts were made to restore it. 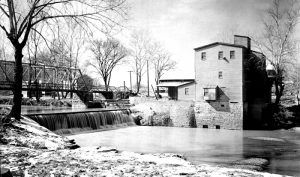 A flash flood in December 1982 destroyed the historic 1879 iron truss bridge over Apple Creek and just four years later, the 1920s historic mill was destroyed by another flash flood in May 1986. Though the mill was never rebuilt, restoration on the old bridge began in 2005 and was completed the next year.  One of the last remaining Pratt truss bridges of its type in Missouri, it was listed on the National Register of Historic Places in 2009. Today, the Old Appleton Bridge that once carried traffic along the highway is a pedestrian bridge over Apple Creek.

This one-time thriving community and commercial center is a semi-ghost town with a population of just about 85 people. It still features its beautifully restored 1879 bridge and a few old buildings. Old Appleton is located along Highway 61 about 17 miles north of Jackson, Missouri. 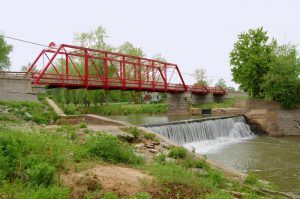 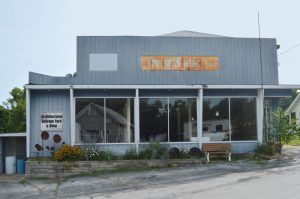