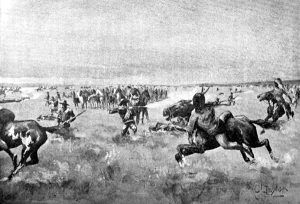 Battle of the Saline River, Kansas

In August 1867, P.S. Ashley and a crew of six men were surveying the route for the Union Pacific Railway when they were attacked by a group of about 30 Cheyenne warriors, attempting to stop the construction of the iron rails through their homeland. All six of the railroad workers were killed, but one man named William Gould survived and was brought to Fort Hays, Kansas, where he told his story before he also died of his wounds. At that time, one of Fort Hays’ main functions was to protect the railroad workers and Captain Henry Corbin, commanding the Thirty-eighth Infantry and Tenth Cavalry, known as the “Buffalo Soldiers,” immediately ordered Captain George Armes, Company F, Tenth Cavalry, in pursuit of the Cheyenne.

Armes and his men then began to follow the trail and were soon sent back to the fort for reinforcements. However, after waiting for four hours, the anxious men continued the pursuit before the reinforcements arrived. Some 25 men of the Thirty-eighth Infantry, under the command of Sergeant Pittman of Company C, were sent out to reinforce the Tenth Cavalry. Following the trail up the North Fork of Big Creek northeast of Fort Hays, they encountered a small band of 50 Cheyenne warriors and, with three shells from a howitzer, succeeded in scattering the Indians but doing little damage. When they found no signs of Captain Armes and his men, the Thirty-eighth Infantry returned to Fort Hays.

In the meantime, Armes had followed the trail up the Saline River and about 25 miles northwest of Fort Hays, they were surrounded and attacked by some 400 Cheyenne warriors. Armes quickly ordered his men to dismount and fight on foot, and the soldiers soon found themselves surrounded. Outnumbered, Armes then ordered his men to form a compact defensive maneuver by forming a “hollow square” around the cavalry horses and began to march toward Fort Hays. The battle raged for six hours as the Buffalo Soldiers fought off their attackers. Amazingly, when the soldiers were about ten miles north of Fort Hays, the Cheyenne broke off the attack. During the 30 hours, the troops had been gone, they had marched 113 miles without rations, 15 of those miles while under attack. Although 2,000 rounds of ammunition had been fired during the battle, casualties were surprisingly light – with only six Indians and one soldier, Sergeant William Christy, killed. Christy was the first combat death in the Tenth Cavalry. Armes would later say of the battle, “It is the greatest wonder in the world that my command escaped being massacred.”