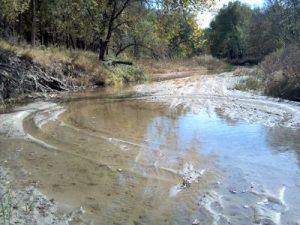 Though the exact location is unknown but thought to be near Penokee, in Graham County, the Battle of Solomon Fork took place along the Solomon River in July 1857. The skirmish was led by Colonel Edwin V. Sumner, commander at Fort Leavenworth, who had taken to the field in an effort to subdue the Cheyenne Indians. With a force of about 500 men, Sumner and his troops were in what is now Sheridan County, when he received word from his scouts that a large body of Indians was massed a short distance ahead. On July 29th, they pursued the Cheyenne down Solomon’s Ford of the Kansas River when they came upon about 300 Cheyenne warriors, drawn up in battle array. Sumner would later write:

“The Indians were all mounted, and well-armed, many of them had rifles and revolvers, and they stood with remarkable boldness until we charged and were nearly upon them when they broke in all directions, and we pursued them seven miles. Their horses were fresh and very fleet, and it was impossible to overtake many of them.”

In the pursuit, the troops killed nine of the Indians and wounded several others. Of the troops, two men were killed and eight were wounded. The troops continued to follow the Indians and on July 31st, came upon their village, where 171 lodges were standing, but all the Indians were gone. Sumner then destroyed the village and continued the pursuit, trailing them some 40 miles, but the Cheyenne had scattered. Sumner did not again intercept the Indians at that point on the Arkansas River nor did he catch them at Bent’s Fort in Colorado as he later hoped, because his command was broken up by an order detaching part of it for service in Utah.