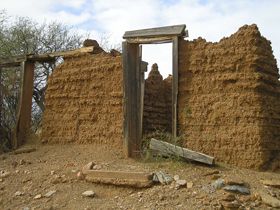 On July 12th, the two men appeared for sentencing. Martinez was sentenced to be hanged on August 18, 1922, while Silvas was sentenced to life imprisonment in the Arizona state penitentiary. Of the crime, Judge W.A. O’Connor said: “The crimes of which you have been convicted are perhaps the cruelest ever committed in Arizona. Let the punishment that awaits you serve as a warning to others who may contemplate the commission of similar crimes.”

But the drama was not yet over. The next night Santa Cruz County Sheriff George White and Deputy L. A. Smith loaded the prisoners into a car to take them to the state penitentiary at Florence. But, before they reached their destination, Pima County Sheriff Ben Daniels would receive a disturbing phone call. The prisoner car had been found rolled over in a ditch near Continental, Arizona. Near the car the bodies of White and Smith were sprawled on the ground with their skulls caved in. White was already dead but Smith was still breathing and rushed to the hospital.

Authorities immediately began an investigation, finding a place about 200 feet from the wreck where it appeared the prisoners had jumped from the moving car. Nearby was a blood-stained wrench that had obviously been used to bludgeon Officers White and Smith.

Lawmen, using dogs, immediately began to pursue the outlaws. But it was raining and the dogs quickly lost the scent. The pursuit was given up for the night but immediately resumed the next morning. Following their trail over the Santa Rita Mountains, they lost it near Ruby.

In the meantime, Deputy Smith died without ever regaining consciousness. As the news spread of a third double murder, area citizens were enraged and volunteer posses poured in from Pinal, Pima, Cochise, and Santa Cruz counties, who were sent out to scout the desert and guard the roads. 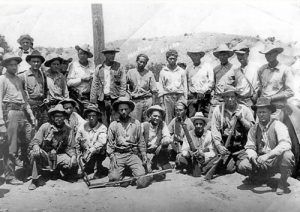 Posse and Prisoners. Over 200 men pursued the Pearson’s murderers after they escaped during transport to the prison in Florence. Silvas and Martinez are in the middle of the back row. Photo courtesy Nogales Herald, July 20, 1922.

The dogs were brought in once again but were of no help. Five days after the convicts’ escape, some 700 men were combing the area in the most extensive manhunt in the history of the entire Southwest.

Finally, on the sixth day, a blood-stained file was found, that authorities believed the convicts had used to cut off their handcuffs. Immediately, the lawmen were on the trail again finally catching up with the pair who were hiding underbrush in the Tumacacori Mountains. Having run for over 70 miles of broken country, they were raving with thirst and exhausted. Arrested once again, they were first taken to Nogales before being quickly whisked off again to the penitentiary. This time there would be no escape for the two men.

On the date of his execution, Martinez was granted a last-minute stay of execution. As his appeals dragged on, they were finally exhausted and he was sentenced to die once again on May 23, 1923.

In another desperate attempt, the Mexican Consul obtained a writ that once again delayed Martinez’s execution. However, the Supreme Court intervened, quashed the writ and the killer was sentenced to die for the last time. On August 10, 1923, Martinez was hanged. 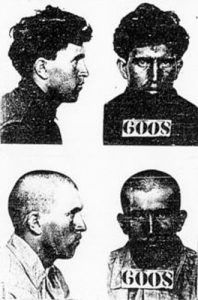 Placido Silvas was sent to prison for life. However, on December 3, 1928, he escaped from a State Penitentiary work ranch and was never seen again.

In the meantime, the town of Ruby, so drenched in blood, petitioned the U.S. War Department for protection, which stamped out the threat of bandit raids. Ruby lived on, albeit quietly for the next couple of years. Unbelievably, the store sold once again and was run by a man named Worthington who operated it for a couple of years.

When the dams still did not provide enough water, the company built a 15-mile long pipe extending to the Santa Cruz Valley that lifted water 1,500 feet in two storage tanks. Before long, the town had electricity provided by the company’s diesel engines, a doctor, an infirmary, company stores, a school with three teachers instructing eight grades, the ever-present saloon, and some 2,000 residents. The mine ran 24 hours per day, only closing on Christmas and July 4th. 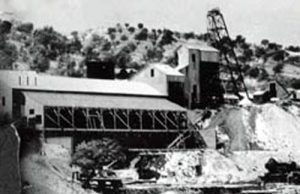 From 1934 to 1937, the Montana Mine was the leading producer of lead and zinc in the state and the third-largest in silver production. However, the ore finally played out in 1940 and the town became a ghost. The mill operation was moved to Sahuarita. The post office closed forever on May 31, 1941. Though no records exist on the dollar amount taken from the Montana Mine, one estimate puts the total for the Oro Blanco district at more than $10 million for the period between 1909 and 1949.

The Ruby Mercantile remained intact until 1970 until it finally collapsed. For decades, the area remained private and because no access was allowed to anyone other than owners, Ruby has suffered few of the indignities of vandalism and theft often found in other ghost towns.