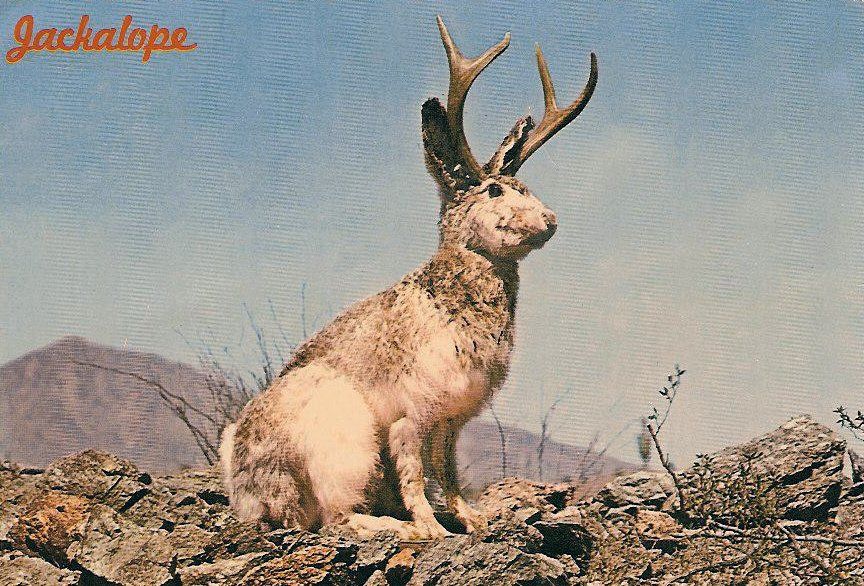 Thought to be a myth by many, the jackalope is alleged to actually exists in remote areas of Wyoming.

Whether the jackalope actually exists or is simply a hoax popularized by a Douglas, Wyoming resident in 1939, is still hotly debated today.

For those who believe, the jackalope is said to be an antlered species of rabbit, sometimes rumored to be extinct. One of the rarest animals in the world, it is a cross between a now extinct pygmy-deer and a species of killer-rabbit. However, occasional sightings of this rare creature continue to occur, with small pockets of jackalope populations persisting in the American West. The antlered species of rabbit are brownish in color, weight between three and five pounds, and move with lightning speeds of up to 90 miles per hour.

They are said to be vicious when attacked and use their antlers to fight, thus they are sometimes called the “warrior rabbit.”

The jackalope was first encountered by John Colter, one of the first white men to enter what would one day be the State of Wyoming.

They also allegedly possess an uncanny ability to mimic human sounds and when chased will use these abilities to elude capture. During days of the Old West, when cowboys gathered by the campfires singing at night, jackalopes could often be heard mimicking their voices. 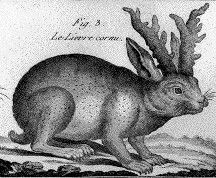 Jackalope drawing in the 1700s

Most commonly sighted in the states of Wyoming, Colorado, Nebraska, and New Mexico, the jackalope also appears to have a European cousin, in Germany, known as the wolpertinger, and in Sweden, a related species called the skvader. Illustrations of horned hares go back as far as the 16th century in scholarly European works

Some people do not believe a separate species exists of its own, but rather the jackalope is “real” only because of a virus called papillomatosis. Also called Jackalopism, the disease causes certain growths caused by a parasite to harden on the top of a rabbit’s head, resembling horns. It is this virus that they attribute to the birth of the jackalope legend.

For others, the jackalope is thought to be nothing more than a mystical creature, perpetuated by Douglas Herrick, a resident of Douglas, Wyoming, in 1939. The whole thing began after Douglas and his brother Ralph had returned from hunting one day. When Ralph threw a dead jackrabbit on the floor of the shop, it slid right up against a pair of deer horns. When Ralph declared that “it looked like a rabbit with horns on it,” Douglas, a taxidermist, decided to mount it. From there, the mounted jackalope was born and the pair of brothers began to sell them to the public. Before long, they could be found everywhere, in homes and taverns all over the American West. At the same time, jackalope postcards became a popular Western souvenir.

The jackalopes of Douglas, Wyoming became so popular that by the late 1940s the city had proclaimed itself as the “Jackalope Capital of the World,” promoting the self-proclaimed title in brochures and other tourism advertising.

In 1965, an eight-foot concrete statue was erected in downtown Douglas and today billboards, and jackalope images can be seen all over Douglas — on park benches, fire trucks, motel signs, and a 13-foot-tall jackalope cutout on a hillside. The city is also very good about warning visitors of the “vicious” animal’s propensity to attack, so tourists will see a number of posted warning signs throughout the town: “Watch out for the jackalope.” 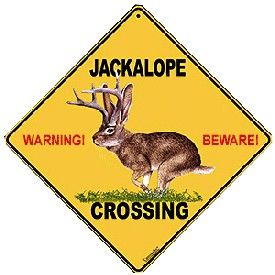 Every year, Douglas hosts and annual Jackalope Day in June that hosts a Mini-Monster Truck Obstacle Course, Mud Volleyball tournaments, a Motorcycle Show and Rally, the Greased Pig Run, and numerous other events for those hoping for a peek at a “real jackalope.”

Each year, the Douglas Chamber of Commerce also issues thousands of jackalope hunting licenses, despite rules specifying that the hunter cannot have an IQ higher than 72 and can hunt only between midnight and 2 a.m. each June 31st.

But, this is still not enough for the “Queen City” of Jackalope Country, which now plans to build yet another giant Jackalope. Towering over I-25, the giant fiberglass jackalope will stand 80 feet above the plains.

In 2005, Wyoming legislators declared the jackalope as the state’s “Official Mythical Creature.”

A retired Military reader reached out to us in May of 2022 with this encounter:

Well…It ain’t mythical, and it ain’t extinct either.  I wished I had a camera…but I am in Malatya, Turkey at the moment.  I was driving down a treacherous mountain road 3 nights ago.  I was going only about 30 KPH when something came down the hill into the road.  I thought at first it was a rock so I slammed on the brakes; but then it hit my headlights.

I had NEVER heard of these before–the most fascinating creature I had ever seen; so naturally, I was quite curious as to what kind of animal this was.  It was probably 3 feet tall at the back, it ran like a dog, but looked like a rabbit… but it had a miniature antler rack on its head that would make the biggest and most majestic buck deer jealous.

I got home and decided to look this thing up on the internet, I was wondering if they were strictly found in this region of the world…only to be met by an onslaught of “it’s fake” “legends” “Myths” “crypto zoological” (<scientific terminology for “fake”.), and ONE collaboration site–sort of.  This site claimed that all horned grown on a rabbit is cancerous and not calcium.  They say that it is tumorous material instead.  Whilst this site is correct about cancer causing tumors, the tumors are ALWAYS misshapen, saggy, and pathetic looking.  What I saw was DEFINITELY regal looking calcified antlers.

So… I guess that I am officially one of the “nut-cases” and “embellished story tellers”…but I KNOW what I saw… I saw it very clearly, nothing in my way, not a foggy night, it was very very clear; and very very well lit up by my headlights.