Battle of Palo Alto during the Mexican American War by E.B. and E.C. Kellogg,1846.

The Mexican-American War was an armed conflict that occurred after the 1845 U.S. annexation of Texas that lasted from 1846 to 1848. 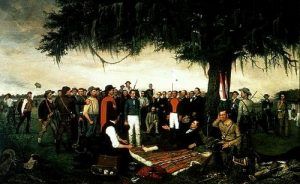 William Huddle’s 1886 depiction of the end of the Texas Revolution shows Mexican General Santa Anna surrendering to the wounded Sam Houston after the Battle of San Jacinto in 1836.

January 1, 1846 –  President Polk orders General Zachary Taylor to march to the Rio Grande to protect Texas from any invasion by Mexican troops.

April 25-26, 1846 – Thornton Affair – Resulting in a Mexican victory, this battle occurred in the disputed borderlands of South Texas, instigating Congress to declare war on Mexico.

May 8, 1846 – The Battle of Palo Alto occurred when the Mexican Army, under Mariano Arista in the disputed land between the Rio Grande and Nueces River, engaged an American army attempting to lift the aforementioned Siege of Fort Texas. Resulted in an American victory.

May 9, 1846 –  In the Battle of Resaca de la Palma near Brownsville, Texas Mariano Arista is defeated by General Zachary Taylor.

May 18, 1846 – Occupation of Matamoros – U.S. troops occupy Matamoros, Tamaulipas, Mexico with no resistance. More than 300 sick and wounded Mexicans are captured in the hospitals.

July 7, 1846 – The Battle of Monterey, California results in a U.S. victory when Navy Commodore John D. Sloat occupies the city. 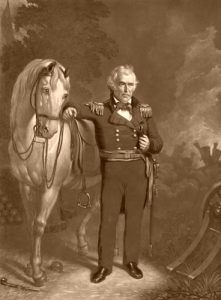 September 26-27, 1846 – In the Battle of Chino, Californios defeat and capture 24 Americans, led by Benjamin D. Wilson, who were hiding in an adobe house in Rancho Santa Ana del Chino, near present-day Chino, California.

December 16, 1846 – The Mormon Battalion captures Tucson, Sonora and occupies her for a day or two.

January 2, 1847 – The Battle of Santa Clara Fought in California, resulting in a U.S. victory.

January 8, 1847 –  The Battle of Rio San Gabriel is fought as part of a series of battles for control of Los Angeles, California . The skirmish results in an American victory.

January 29, 1847 – Battle of Embudo Pass – The last insurgent stand before the Siege of Pueblo de Taos in New Mexico results in an American victory.

February 1, 1847 – Second Battle of Mora – Another American expedition armed with howitzers succeeded in razing the village of Mora, New Mexico. 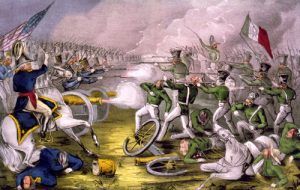 February 28, 1847 – Battle of the Sacramento – Colonel Alexander Doniphan defeats a larger Mexican army before near the Sacramento River the capture of Chihuahua, Mexico. 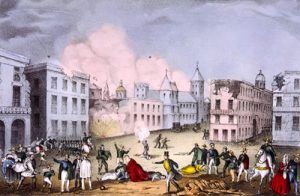 April 22, 1847 – Capture of Perote – 54 Guns and mortars, and 500 muskets are captured at the Castle of Perote on the summit of the Eastern Cordilleras, 50 miles from Jalapa, Mexico. This was considered the strongest fortress in Mexico, except Veracruz.

May 26, 1847 – Battle of Red River Canyon – New Mexican insurgents fight a skirmish with United States troops which results in an American victory.

August 19, 1847 – Battle of Contreras – Also known as Battle of Padierna, Santa Anna failed to support the Mexican line at a critical moment resulting in a U.S. victory.

August 20, 1847 – Battle of Churubusco – Regular Mexican troops and Saint Patrick’s Battalion under Manuel Rincón hold a fortified monastery against General Winfield Scott. Just over half of the San Patricios are killed or captured, the rest retreat with the rest of the Mexican forces in the area. 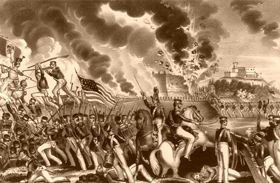 September 8, 1847 –  Battle of Molino del Rey – One of the bloodiest engagements of the Mexican-American War, the Americans lost nearly 800 men in an attempt to take a suspected cannon foundry. Still, the battle resulted in an American victory.

September 14, 1847 – Siege of Puebla – Mexican forces begin the siege of Puebla, Mexico, which will last for the next 28 days. 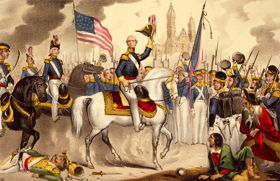 October 12, 1847 – The Siege of Puebla lifted by the relief force who were able to fight its way into the city.

October 19, 1847 – Skirmish at Atlixco – Also known as the “Atlixco Affair,” this skirmish results in an inconclusive victory.

January – August 1848 – Mexican partisans continued to resist the U.S. Army of Occupation. Formal fighting, however, had ceased by the end of January. 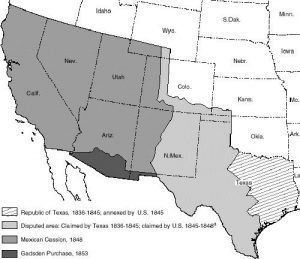 February 2, 1848 –  The Treaty of Guadalupe-Hidalgo signed, officially ending the Mexican-American War. The treaty provided for the Mexican cession of 525,000 square miles to the United States in exchange for 15 million dollars.

March 9 – 16, 1848 – Battle of Santa Cruz de Rosales – General Sterling Price advances into Chihuahua after the Treaty of Guadalupe Hidalgo was already signed. On March 9, Price demanded the unconditional surrender of the town. When General Trias refused to comply, he laid siege and waited for the arrival of reinforcements. Little happened until March 16, when Price decided to carry the town by assault.