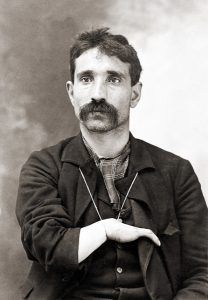 They came from the mobbed-up city of Corleone, Sicily, but they perpetrated their murder and mayhem in the mean streets of New York City.

The co-leader of the Black Hand was a monstrosity of a man named Giuseppe (Joe) Morello. Morello was born in 1867 with a severely deformed right hand that contained only an elongated pinkie finger that was bent grotesquely downward. As a result, Morello was called, “The Clutch-Hand,” “Little Finger,” and “One Finger Jack”.

Joe Morello’s father, Calogero Morello, died in 1872 and his mother, Angelina Piazza, remarried one year later to Mafioso Bernardo Terranova. Joe Morello’s stepfather and mother had four children together: Nick, Ciro, Vincent, and Salvatrice. There is some confusion as to the exact relationships, but Nick Terranova, also known as Nick Morello, was, in fact, not Joe Morello’s brother, but his half-brother. Salvatrice Terranova married a wicked man named Ignazio Lupo The Wolf” Saietta, who later in America, along with Joe Morello, and Nick and Vincent Terranova, formed the hated, and much-feared Black Hand. For all practical purposes, Saietta and Morello had equal power in the organization.

While still in Corleone, Joe Morello and his three half-brothers were introduced by Bernardo Terranova into the Corleonesi Mafia (sometimes called the Fratuzzi), where they made their bones by killing whomever the Corleonesi bosses said needed to be killed. One such victim was Giovanni Vella, the head of a quasi-police force called the Guardie Campestri, or Field Guards, which patrolled Corleone on foot looking for Corleonesi Mafia members up to no good.

In 1888, Joe Morello was arrested for the murder of Vella, but then strange things began to happen.

First, the smoking gun Morello was arrested carrying minutes after the Vella murder, oddly disappeared from the local carabinieri (police) lockup. Apparently, the gun was snatched by an enterprising carabinieri, who was paid molto lira to do so.

Secondly, there was the slight problem of a woman named Anna Di Puma, who claimed she saw Joe Morello shoot Vella to death in a darkened alleyway. Two days after Vella’s demise, Anna Di Puma was sitting outside a friend’s house, having a nice conversation, when a gunman walked up behind her and shot her in the back, killing her instantly. With no smoking gun and no witnesses to testify against him, Joe Morello was set free.

Morello decided it was time for him to start making some big money by dealing in the sale of “funny money,” or counterfeit bills. This went fine and dandy for a while, until in 1892, when Morello was arrested with a fistful of phony cash in his good left hand. Rather than face charges in Sicily, Joe Morello thumbed his nose at the Italian authorities, and absconded secretly to America, settling in the Lower East Side of New York City. Little did it matter that Morello was tried “in absentia,” and sentenced to six years in solitary confinement. Morello was a vast ocean away from his punishment and ready to make his mark in the grand “Mountain of Gold.”

Soon after Joe Morello escaped from Sicily and landed illegally in America, Bernardo Terranova, his wife Angela, and six of their children, boarded the ship Alsatia and headed for America to join Joe Morello. Also with them was Joe Morello’s wife, Lisa Marvelesi, with her two-month-old baby Calogero, who was named after Joe Morello’s blood father. They passed, as all immigrants did at the time, through Ellis Island and entered America legally. While most immigrants came to America with only the clothes on their back and a few measly few bucks in their pockets, the Terranovas brought with them the stunning total of 18 pieces of luggage, filled with the finest clothes, and who knows how much money. Even though this certainly was not against America law, it should have raised some eyebrows among the Ellis Island officials, since Sicilian Mafioso Bernardo Terranova listed his occupation as “laborer,” even though he was a well-known murderous Mafioso in Corleone.

When they first came to America, Morello and the Terranovas tried their best to fly under the radar of American law enforcement. Even though there was basically no communication between the Sicilian police and their American counterparts, there was still a three-year grace period after which an Italian immigrant became immune to deportation. The Terranovas joined Morello and settled in Manhattan’s Little Italy on the Lower East Side of Manhattan. At first, they tried to make a living in a series of legal jobs, including plastering. 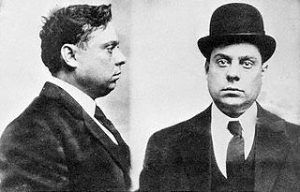 When they first arrived in New York City, Morello ostensibly tried to earn an honest living, but this was all a front for his illegal activities, like bookmaking and loan sharking. Soon flush with money, Morello invested in several small businesses, including a coal store and several bars and restaurants in Little Italy, and as far north as 13th Street, all of which soon folded for “lack of business.” In 1899, Morello went back to what he knew best: counterfeiting – but this time the counterfeiting of American money.

Morello installed a small printing press in an apartment at 329 106th Street, in what was known as Italian Harlem. He printed up mainly two-and-five-dollar bills, which were the most commonly used American currency. To spread these bills around New York City, Morello hired several men, both of Italian and Irish descent. The New York City police got wind of the counterfeiting ring, and several of Morello’s workers were arrested. A man named Jack Gleason (not the comedian) immediately flipped and gave the police Morello as the mastermind of the operation. Morello was arrested, but since none of the other men arrested dared testify against Morello, and also because when arrested, Morello had only legitimate American currency in his possession, Morello walked out of jail without even being indicted. But this embarrassment taught Morello a severe lesson he’d never forget: never work closely with anyone, except men he knew from Sicily.

It is not clear whether Joe Morello or Ignazio Saietta originally started the Black Hand extortion scheme in America. What is clear is that around 1898 or 1899 both Morello and Saietta, along with the Terranova brothers Vincenzo and Ciro, began terrorizing local Italian businessmen of some means by sending them “Black Hand” or “La Mano Nera” extortions letters. These letters threatened local businessmen with the bombing of their businesses, or even death, if the businessmen didn’t immediately cough up some very substantial cash. On the bottom of the extortion notes was the imprint of a “Black Hand,” which was made by a hand dipped in black ink (but due to the inroads law enforcement had made with fingerprinting at the time, the “Black Hand” was later drawn instead). If the businessman did not comply with the note’s demands, he would indeed get his business bombed, and sometimes he was tortured, and even killed in the infamous Murder Stables, located at 323 East 107th Street in Harlem.

1 thought on “Joe Morello and the Black Handers”