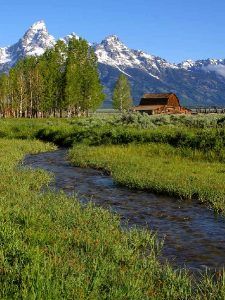 —  From the state song, “Wyoming,” lyrics by C.E.Winter

Wyoming was the first state to have a county public library.

The popular Columbia Pictures film, Close Encounters of the Third Kind, was filmed on location at Devil’s Tower.

Middle Jurassic dinosaur footprints that are 165 million years old were found near Shell in 1997.

Dinosaur skull and bones discovered at Alcova Lake were found by a local elementary class on a field trip.

Any person who fails to close a fence in Wyoming is subject to a fine of up to seven hundred and fifty dollars.

The first book printed in Wyoming, in 1866 was the Dictionary of the Sioux Language.

The world’s largest coal mine by reserve is the North Antelope Rochelle Mine, about 60 miles south of Gillette, Wyoming.

The first Dude Ranch in Wyoming was the Eaton Ranch, near Wolf. The Eaton’s also came up with the term “dude”.

The horse on the Wyoming license plate has a name, “Old Steamboat.” It is named after a bronco that could not be ridden in the early 1900s.

Wyoming has the lowest population of all 50 United States.

In Cheyenne, residents are not allowed to take showers on Wednesdays.

The majority of Yellowstone National Park lies within the boundaries of Wyoming, with smaller portions in Idaho and Montana. 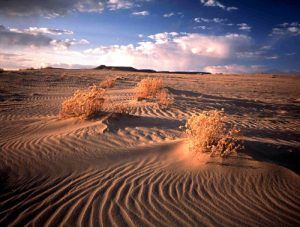 The second-largest traveling sand dunes in the world — the Killpecker Dunes, are located north of Rock Springs.

In Wyoming, it is illegal to wear a hat that obstructs people’s view in a public theater or place of amusement.

The first business west of the Missouri River was a trading post established at the confluence of the Laramie and North Platte Rivers by veteran fur traders William Sublette and Robert Campbell.

In Wyoming, you may not take a picture of a rabbit from January to April without an official permit.

The Wind River actually changes its name in the middle of the stream becoming the Big Horn River at a site at the north end of the Wind River Canyon, where each year the Native Americans hold a ceremony depicting the “Wedding of the Waters.”

In Jackson, Wyoming it is against the law to spit on the sidewalks or in the streets. Should you carry out this offense in front of a lady, you could be arrested and jailed for no more than three days and required to pay restitution to the woman. 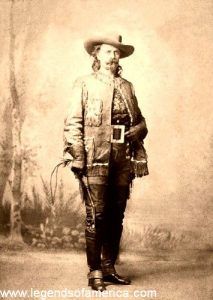 It is against the law for junk dealers to transact business with anyone who is drunk.

When the Wyoming Territory was organized in 1869, Wyoming women became the first in the nation to obtain the right to vote.

Bigfoot has been allegedly sighted several times in Wyoming in the Wind River Mountains, Yellowstone, Teton Forest, and Snow King Mountain near Jackson.

Harry Longabaugh became known as “the Sundance Kid” because he served a jail term for horse stealing in Sundance, Wyoming. 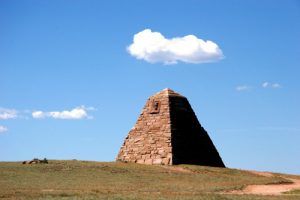 The Ames Pyramid is A sixty-foot tall, stone-block monolith, called the Ames Pyramid, stands on the otherwise empty plains just east of Laramie.

Using a firearm to fish in Wyoming is strictly forbidden by law.

The J.C. Penney stores were started in Kemmerer.

The Red Desert in south-central Wyoming drains neither to the east nor to the west. The continental divide splits and goes around the desert on all sides leaving the basin without normal drainage.

Any new commercial buildings constructed at a cost of more than $100,000 are required to spend a minimum of 1% of those funds on artwork for the building. 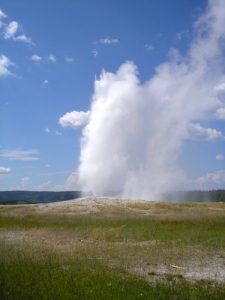 Yellowstone National Park has more geysers than any other geyser field in the world.

An ordinance in Newcastle, Wyoming, specifically bans couples from having sex while standing inside a store’s walk-in meat freezer.

At the Carbon County Museum in Rawlins, are the remains of an outlaw by the name of George Manuse who was more familiarly called “Big Nose George.”  However, one doesn’t see a skeleton here, but rather a pair of shoes that a local doctor made from the dead man’s skin and the top of his skull, that was used as both a doorstop and an ashtray. The doctor, John Osborne, would later wear the shoes when he became the Governor of Wyoming. 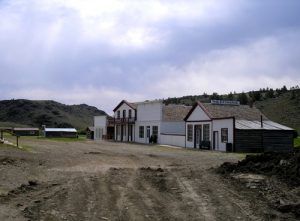 South Pass City is allegedly haunted by the resident spirit of Polly Bartlett, who is said to have been a greedy, murderous, young woman.

If you are found to be drunk in a mine in Wyoming, you could be sentenced to up to a year in jail.

The world’s largest elkhorn arch is in Afton, Wyoming.

In Cheyenne, it is illegal to spit on the steps of a school.

Seven miles east of Medicine Bow is the Dinosaur Bone House made up of 26,000 fossils.

Devils Tower was designated as the first National Monument in 1906.

An old law on the Wyoming books makes it illegal for women to stand within five feet of a bar while drinking.

The only known monument in the United States built in honor of a prostitute is located south of Lusk, Wyoming. Called the Old Mother Feather Legs Shepard Monument, it was erected in 1964.

Skiing under the influence of alcohol is against the law.

The Jackalope, thought by many to be a mystical creature, is actually said to exist in Wyoming.  One of the rarest animals in the world, it is a cross between a now extinct pygmy-deer and a species of killer-rabbit.

One of the newest mammals known to man was recently discovered in a Wyoming petrified tree stump. Living some 65 million years ago, the shrew-like mammal is the smallest recorded to date, weighing 1.3 grams.

The town of Kemmerer is known as the Fossil Fish Capital of the World. Kemmerer is home to over 100 Pronghorn Antelope, about 3,000 people, and over 100,000 fish fossils.

Jackalopes in Wyoming – Myth or Reality?

Monument to a Prostitute in Lusk