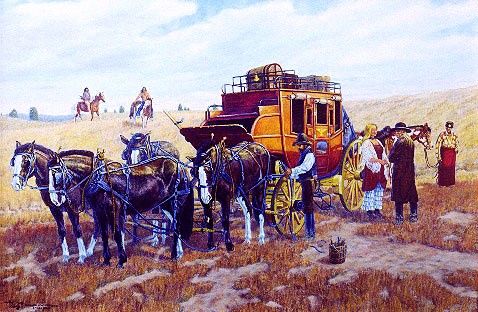 On the windswept plains of eastern Wyoming stands the only monument to a prostitute known to exist in the United States. Though “Featherlegs,” as she was known, was seemingly well-liked by area residents, it is doubtful that the area citizens would have built a monument to her during her heyday.  However, she was seemingly perceived to be an “important” part of history along the Cheyenne-Deadwood Stage Road when the monument was erected in 1964.

Back in 1876, on the Silver Springs Road, near Muskrat Canyon, Charlotte “Mother Featherlegs” Shephard established a saloon and “house of ill-repute.”  Though it was more of a dugout than a “house,” it didn’t stop the many men, lonely for female companionship, from frequenting her establishment.

She was called “Featherlegs” because her lace-trimmed red pantalettes made her limbs look like chicken legs, and she was often known to gallop across the prairie riding astride a horse with her lacy ruffles flowing in the wind. When one of her customers commented that she looked just like a feather-legged chicken, the nickname stuck. A middle-aged auburn-haired woman, she ran the establishment along with an outlaw who was called Dangerous Dick Davis.  In no time, the saloon and brothel became a favorite gathering place for Dangerous Dick’s cohorts. Mother Featherlegs was often entrusted with large sums of money and jewelry that she would hide for the outlaws until they could safely dispose of them.

But for Featherlegs, the prosperity was not to last.  In 1879, when a woman named Mrs. O.J. Demmon, the wife of a Silver Springs rancher, took a ride along the trail, she found the madam’s murdered body next to the spring. Having laid there for several days, moccasin tracks like those worn by “Dangerous Dick” were found around her body.  Featherlegs was buried where she died.  Meanwhile, Dangerous Dick had skipped the country, along with her cache of money and jewelry.

With the booty in hand, Dangerous Dick returned to the swamps of Louisiana, which had long been his preferred choice for his outlaw activities.  However, a couple of years later, he was found there and charged with robbery and murder.  Before he was hanged, he confessed to having killed Mother Featherlegs and told the world that her real name was Charlotte Shephard. However, many contend that Charlotte wasn’t her real name either, and Bob Darrow, the founder of MotherFeatherLegs.com, tells us that the name Charlotte came from a poem Russell Thorp recited at the monument dedication.

The 3,500-pound pink granite monument was erected in 1964 in conjunction with a reenactment of the Cheyenne-Deadwood Stage run. 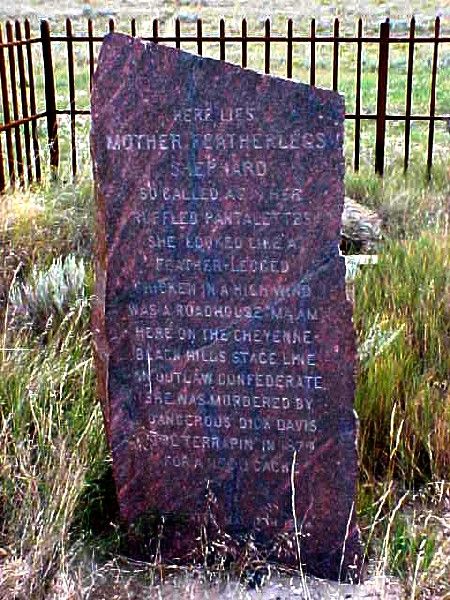 The inscription reads: Her lies Mother Mother Featherlegs. So-called, as in her ruffled pantalettes she looked like a feather-legged chicken in a high wind. She was roadhouse ma’am. An outlaw confederate, she was murdered by “Dangerous Dick Davis the Terrapin” in 1879.

At the time of the re-enacted stage run, her famous pantalets were also displayed at the marker.  However, they were stolen on the same day.  Years later, when they were discovered in a Deadwood saloon in 1990, a determined “posse” of Lusk residents raided the saloon and got them back. Unfortunately, for fear of further theft, they no longer grace the monument’s site.  They are now on display at the Stagecoach Museum in Lusk, Wyoming.

The monument is located ten miles south of Lusk on the old Cheyenne trail.  Be prepared, this unpaved road can often be pitted with muddy ruts.