By Charles Carroll Goodwin in 1913 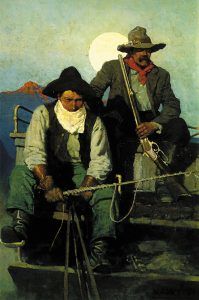 As soon as it was light on those delicious mornings, the criers began one can hear them still,- “Empire Ranch, Rough and Ready, Grass Valley and Nevada” was the first cry. Then came “Oregon Ranch, Camptonville, Downieville.” Then “Oroville, Forbestown and Moore’s Flat.” Then “Tehama, Red Bluff, Shasta and Yreka,” and at steady intervals in a glorified baritone rang out “Sacramento, Sacramento.”

Then, from the stables would come the stages. The horses had been driven across the plains, turned out on their arrival and by the next spring they had grown a hand in height, and when taken up, fed grain and groomed, they were most beautiful.

The great Troy coaches for 27 passengers and drawn by eight horses, had the right-of-way. At first, they were driven on alternate clays by ‘Big John” and: ‘Big Jake.” Their real names were John Littlefield and Jacob Putnam. Later Oscar Ross was put upon that line, but one morning he ran his coach into an opposition coach and knocked it to pieces, and a passenger on the opposition coach, as soon as he could extricate himself from the wreck, fired a full charge of birdshot, at close range, into Oscar’s side and he died three days later.:”Big John” became dissipated and the company took him from the Sacramento route and gave him one of the Camptonville coaches, which were four-horse coaches. After a few days, he made a night with the boys in Camptonville. He was a little: ‘How-came-you-so” when he mounted the box next morning, and, going down the Goodyear hill grade, rolled his coach over, broke the rail from the top of it, bruised badly a Chinese passenger, but managed to get to Marysville. He had the coach repaired at his own expense and next morning drove up in front of the stage office. While waiting for the time to start, a clerk came out of the office and, walking up to the coach, said: “Mr. Littlefield, President Hayworth has instructed me to inform you that your salary has stopped.”

Littlefield began to wind the reins around the brake bar, and in a soft voice which grew harsher as he went on, said: “My compliments to President Hayworth, and kindly say to him that while I hate to disappoint him, if what you have just said is true, I’ll be d—-d if I drive !”

Robert Robins and his twin brother Dan drove the Shasta stages, leaving Marysville on alternate days. They were known as “Curly Bob” and “Curly Dan,” because of their curly hair. As the railroad stretched its way up toward Tehama and Red Bluff, and staging declined, they came to this side of the Sierras and drove on the Overland and branch lines.

They were fine looking men and great drivers and had none of the wild strata in them which is so common in men of their calling. Rob died some years ago in Idaho, and Dan in Salt Lake City a few months ago.

Baldy Green was another famous whip. He was an old-time California driver and then for years handled the ribbons on the Overland between Virginia City and Austin.

The last I heard of him he was a justice of the peace in Humboldt County. His knowledge of the law was limited, but he surely had a great deal of horse sense. He must have been of the Sancho Panza order of magistrates. 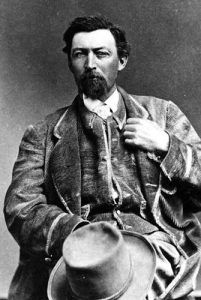 Of course, half of the world has heard of Hank Monk. Before there was any grade over the Sierras and before the finding of the Comstock, Monk drove a stage between Genoa and Placerville. It was there that Horace Greeley encountered him and the famous story has been told with more variations than are used when “Home, Sweet Home” is played on the piano by an amateur.

There was not much to it except that Greeley grew impatient going up the mountains from the Genoa side and sharply told Monk that he was put down for a lecture in Placerville that night. Monk with his drawl told him to keep his seat, that he would have him there on time. Reaching the summit, Monk shook out his team and Mr. Greeley’s head collided with the top of the coach at short intervals, which caused him to cry out to go slower, but Monk’s only reply was: “Keep your seat, Mr. Greeley; I will have you there on time.” Mr. Greeley did not know it, but the man on the box was about the most superb reinsman in the world. His secret was his exact calculation. With every ribbon apparently loose, he would turn a running team on a narrow street, and bring them to a full stop at exactly the right point.

A friend of mine came down one evening with Monk from Glenbrook on Lake Tahoe, to Carson City, fourteen miles, in 45 minutes. The friend asked him if he ever rolled a stage over on that route, for the horses were at full gallop half the time. “Oh, no,” was the reply, “when you strike a level grade ride your brake and let the stock go; but when you turn a curve, take off your brake and give the wheels full play, because to ride a brake around a curve when going lively might make you trouble.”

Monk had a superior education and was famous for droll expressions. I was riding beside him once when, nearing a wayside hotel, a man with an overcoat on arm came running- out of the hotel to the coach. Monk pulled up his team, when the man said: “Monk, have you seen Bill lately?”

‘Yes, saw him yesterday; he’s coming down with me tomorrow,” was the reply.

The man said he was glad, turned and walked back to the hotel, and Monk, easing up on the reins, the team trotted on. When we had gone a few rods. Monk said: ‘I wonder what Bill that yahoo meant?”

“What Bill did you mean?” I asked.

“I meant the way-bill,” said Monk.