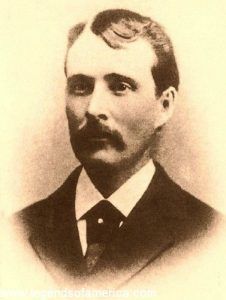 An alleged Wyoming cattle rustler, James Averell, was hanged along with “Cattle Kate” Watson by a cattle baron faction in 1889; that was just one of the many incidents that led to the Johnson County War.

James Averell was born on March 20, 1851, to John and Sarah Ann Averell in Renfrew County, Ontario, Canada. The youngest of seven children, his father died shortly after his birth. At the age of 20, Averell joined the military, was initially assigned to Fort Douglas, Utah, and later transferred to Fort Fred Steele, Wyoming, 15 miles east of Rawlins. In 1876 he was discharged, but he soon re-enlisted, this time assigned to Fort McKinley, Wyoming, near Buffalo.

In Buffalo, he shot and killed a man named Charlie Johnson, a mean hombre with a reputation for fighting and creating trouble whenever he was drinking. Averell claimed that Johnson had threatened him many times with a knife and on this particular occasion, James shot the man in the leg and again in the back when the shot to the leg swung the huge man around. James was held in jail at Rawlins for a time while two grand juries were convened, but he was never convicted and was eventually released.

Averell established a homestead on Cherry Creek at the north base of Ferris Mountain and married a young woman named Sophia Jaeger on February 23, 1882. On August 23, 1882, Sophia gave birth to a three-month premature baby boy who lived for only a short time. Soon after that, Sophia was sick with “childbed fever” at the time, and she also died. The homestead carried too many sad memories for Averell, so he sold the property.

In 1886, he established another homestead near Independence Rock, Wyoming. Before long, he began to raise livestock and established a store and saloon on his land. Later he became the town’s local postmaster, and the approximately 80 residents of Sweetwater elected him Justice of the Peace. This political position, however, may very well have led to his death. 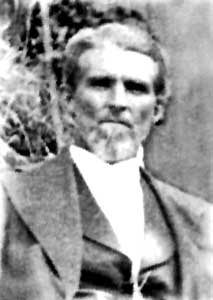 Believing that his political “power” gave him the right to defy the large cattle barons, headed by Albert J. Bothwell, Averell began to complain to authorities about the encroachments taken on homestead lands by the cattlemen. Averell also opposed the Maverick Law, passed in 1884, which provided that unbranded calves found on the open range became the exclusive property of the Wyoming Stock Growers Association. These complaints put him at immediate odds with Albert J. Bothwell.

In the meantime, Averell became close friends with Ellen “Kate” Watson, a neighboring homesteader, who helped him in the saloon. Before long, they became so close that they planned to marry after Watson proved her homestead. Watson was soon caught up in the bitterness against the prominent cattle barons. Finally, with a new governor, the 1888 Legislature repealed the Maverick Law under heavy pressure from the small cattle and landowners.

Legally, Averell began to round up range strays, branding them as his own. In the meantime, he began to write a series of letters to several local newspapers, venting his feelings against the cattle barons, calling them thieves and killers, especially after they had accused Watson of running a “Hog Ranch.”

When Averell wrote to the Cheyenne Weekly Mail in April 1889, explicitly criticizing Bothwell and the Wyoming Stock Growers Association, Bothwell retaliated by claiming that Averell and Watson were stealing his cattle. Dubbing Watson the moniker of “Cattle Kate,” he continued to accuse her of being a prostitute who sometimes accepted stolen cattle in payment.

As the dispute continued to rage over the next several months, Bothwell convinced other area ranchers of Averell and Watson’s guilt. On July 20, 1889, he and five other men hanged the pair at a small canyon by the Sweetwater River.

Though the men were charged with murder, key witnesses began to die or disappear mysteriously, and all of them were acquitted. Both Averell and “Cattle Kate” were “tried” in the press, which was owned or influenced by the cattle barons, and branded as “outlaws.” Bothwell later acquired both homesteads of the murdered victims.

Later investigations into the whole affair have found that most likely neither James Averell nor his girlfriend, Ellen “Cattle Kate” Watson, were guilty of any crime.