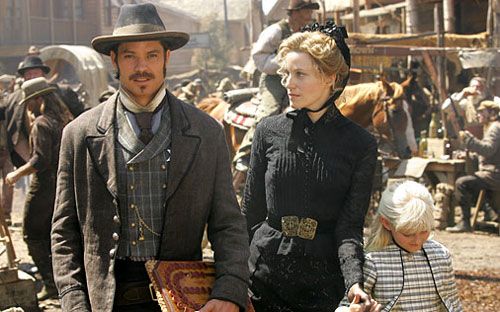 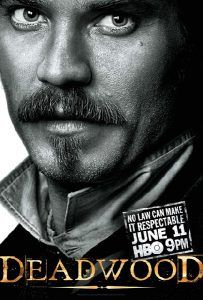 No Law Can Make It Respectable!

Deadwood’s third season was its last!

Though a major campaign was launched by viewers as soon as the first news of non-renewal hit the airwaves, HBO said it made its final decision.

While the ending of Deadwood was a sad state of affairs for this household, and I can’t imagine Seth Bullock being anyone other than Timothy Olyphant, Al Swearengen played by someone other than Ian McShane, and so on, the series had already lasted almost as long as the “real” Deadwood gold rush.

So, we enjoyed while we could, and hoped that HBO or someone else came up with something just as good.

After all, there are all kinds of tales yet to be told about the Old West.

Shoot, the best idea would be to have a sequel – which would be mighty easy if they [HBO] (or someone else) would move on to the Leadville, Colorado mining rush. Back in those days, people, and especially miners, were extremely transient, and it was no exception in Deadwood. When the Leadville strike was made, hundreds of miners quickly fled Deadwood for new potential in Leadville. And, Leadville had all the flair, flamboyance, and violence as did Deadwood. Complete with the rags to riches fortune of the Tabors, Doc Holliday as a resident, an ex- Tombstone character or two trying to shake up new gunfights, many of those same Deadwood characters were there as well, including Charlie Utter, Con Stapleton, Billy Nuttall, and Jack Langrishe. Here’s a catchy title – Deadville to Leadville!

Then, there’s always other gold rushes, such as the Comstock Lode in Nevada, the California 49ers, or the Klondyke gold rush in Alaska.

Or, yet another tale situated in Tombstone or Dodge City; or the many stories of misery, death, destruction, and cuss words found along the trails of America’s westward expansion.

HBO has already proven that there is most definitely a profitable audience for the many tales of the Old West.

UPDATE:!! In January 2016, HBO confirmed that series creator David Milch was working on a Deadwood movie to wrap up the loose ends. It premiered May 31, 2019.