Homestake Mine, South Dakota 1889. Click for prints, downloads and products.

Homestake Mine – The Homestake claim was discovered by brothers, Moses and Fred Manuel, and Hank Harney in April, 1876. In June, 1877, the Homestake claim and another totaling 10 acres were purchased from the Manuels for $70,000 by a group of mining men, including George Hearst. Later that year, in November, the Homestake Mining Company is incorporated and over the next few years, Hearst purchased additional claims, obtained water rights on nearby Whitewood Creek, and began to assemble the Homestake empire. By the summer of 1879, the Homestake operation consisted of ten major and several smaller mines, 540 stamps in six mills, a huge assortment of buildings and over 500 employees.

The Homestake Mine would become the basis of the Hearst financial empire and Deadwood’s sister city Lead’s largest employer for 126 years. Before its closing in 2002 Homestake Gold Mine was the oldest, largest and deepest mine in the Western Hemisphere, reaching more than 8000 feet below the town of Lead. 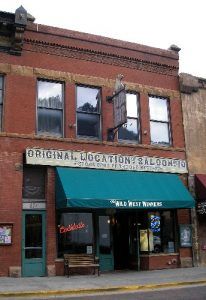 It was here that Wild Bill Hickok was shot by Jack McCall on August 2, 1876. The prior evening when Hickok was playing poker with several men, including McCall, Jack lost heavily. Wild Bill generously gave him back enough money to buy something to eat, but advised him not to play again until he could cover his losses. This obviously humiliated McCall who would take his revenge the next day.

The next afternoon when Wild Bill entered Nuttall & Mann’s Saloon he found Charlie Rich sitting in his preferred seat. After some hesitation, Wild Bill joined the game, reluctantly seating himself with his back to the door and the bar—a fatal mistake. Jack McCall, drinking heavily at the bar, saw Hickok enter the saloon, taking a seat at his regular table in the corner near the door.

McCall slowly walked around to the corner of the saloon where Hickok was playing his game. From under his coat, McCall pulled a double-action .45 pistol, shouted “Take that!” and shot Wild Bill Hickok in the back of the head, killing him instantly. Hickok had been holding a pair of eights, and a pair of Aces, which has ever since been known as the “dead man’s hand.”

The location of the original #10 Saloon was at 624 Main Street, which today is occupied by the Wild West Winners Casino. The original Number Ten saloon burned down in Deadwood’s tragic fire of 1879 and then relocated across the street. In it’s place was built the second I.H. Chase Building in 1898, which housed a clothing store until 1903. When Chase moved out, Frank X. Smith opened a beer hall, which proudly advertised itself as a “metropolitan resort.” Later it housed the Eagle Inn, the sign of which still hangs on the upper portion of the building. Downstairs in the Wild West Casino is an interpretive site that tells visitors all about the curse of the dead man’s hand, and the man who made it famous. 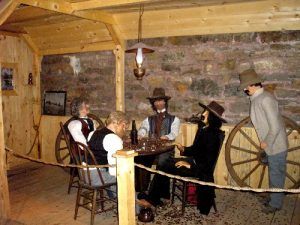 In the basement of the Wild West Winners Casino is a interpretive display of the what happened on the day that Wild Bill Hickok was killed. Kathy Weiser, July, 2006.

The Wild West Winners Casino also encompasses the Bullock-Clark Building which is the site of the original Bella Union Theater as well as the Schwarzwald building, which was long used as a furniture store. The Bullock-Clark building was consumed by fire in 1894 and the two parties rebuilt a single structure on their two lots. Later the combined building would be opened up on the lower floor and utilized as an automobile showroom.

These buildings later served as part of Deadwood’s infamous Green Door District. On the upper levels were the original location of several of Deadwood’s brothels, including Pam’s Purple Door, one of the last to close in Deadwood in 1980. Today, the second story windows are decorated with scantily dressed mannequins, who beckon to the street below, much the real painted ladies of Deadwood’s past once did.

Across the street at  657 Main Street is the recreated Old Style Saloon #10. Here, you will not only find a real saloon, restaurant, and gambling den, but also a “saloon museum” where historical and mining camp artifacts, spanning over 100 years, are exhibited along the walls. One display shows what is allegedly the original “death chair” where Hickok was shot, but according to our sources, it is actually one that is similar. The saloon also features a Bill Hickok, Jack McCall and the other players recreating the shooting every day at 3:00 p.m.

There are other important events in Deadwood’s history that have not yet been shown. We can only wish that we could see how the series would have handled these events.