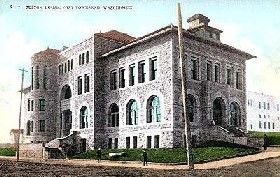 In 1861, President Abraham Lincoln appointed a man named Victor Smith, a newspaper editor from Cincinnati, Ohio, as Collector of Customs for the District of Puget Sound, Washington. However, when Smith arrived, he immediately disliked Port Townsend, thinking it no more than a city of “huts” populated by uncouth Westerners.

An ambitious man, Smith began to promote moving the Customs House from Port Townsend to Port Angeles. With the nation in the midst of the Civil War, he further supported his plan by advocating the idea that the British intended to join forces with the Confederates and the existing Port of Entry could be easily invaded from the British naval base on Vancouver Island in British Columbia.

In anticipation of the move, Smith, and four other men, acquired land in Port Angeles and formed a Townsite Company to develop the new community. The townsfolk of Port Townsend soon learned of Smith’s plan, which of course, created feelings of hostility in the burgeoning community of Port Townsend.

When Smith’s letters to the Treasury Department failed to get immediate results, Smith traveled to Washington D.C. to promote his plan to fortify Port Angeles and relocate the Customs House there. Promoting Port Angeles’ superior location because it was nearer the ocean, he convinced Congress to move the Customs District of Puget Sound from Port Townsend to Port Angeles. It was made official in June 1862. 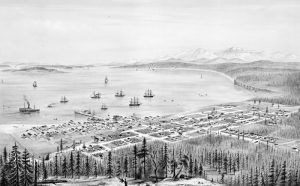 However, all was not going exactly as Smith had planned. While he was celebrating his success on his return voyage to the west coast, the Acting Collector of Customs in Port Townsend, Lieutenant Merryman, was auditing the books of the Customs House. Finding the accounts short some $15,000, Merryman immediately reported the discrepancy to the Treasury Department by letter.

When Smith returned to Port Townsend on August 1, 1862, Lieutenant Merryman refused him access to the Customs House, accusing him of embezzlement and insisting that he would await official clearance from the Treasury Department before allowing Smith to return to his duties.

But Smith was not to be deterred. Returning to the ship on which he had arrived, he ordered the captain to train his three 12-pound cannons on the Customs House and the city’s commercial district. With the guns trained on the city, Merryman finally gave up the records, and the ship sailed for Port Angeles.

Incensed, Port Townsend citizens soon traveled to Olympia to protest Smith’s actions to the governor. Though a federal grand jury indicted Smith with 13 counts of embezzlement and misuse of public funds, the Treasury Department quashed the indictment after their investigation. 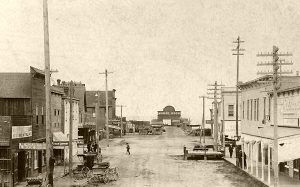 In the meantime, Smith constructed a large building in Port Angeles, which served as his family home and the Customs House. But, the Port Townsend citizens were not done fighting and began to build a case denouncing Smith and the transfer of the Port of Entry to Port Angeles.

After Smith completed the building in Port Angeles that served as both his home and the Customs House, a portion of it was rented to the government for its use. However, the building was to be short-lived as in December 1863, a landslide in the Olympic Mountains caused the dam to burst, sending a torrent of water through the town. Leveling most of the city and sweeping the Customs House into the Strait of Juan de Fuca, and killing two customs employees. Smith was out of town, and his family was spared.

It was this disaster that leads to the first treasure tale. Inside the Customs House was a strongbox that allegedly held $1,500 in banknotes and numerous $20 gold coins valued at $7,500 at the time. While some say this money was funds that Smith had stolen during his tenure as a Customs Agent, others contend it was money rightfully paid to him by the government for his home in Ohio. In any event, the strongbox was swept away in the flood, and no trace of it has ever been found.

Finally, President Lincoln removed Smith as a Customs Collector in January 1864. However, his “friends” at the Treasury Department gave him a new role as a special agent.

In this new job, Smith was often tasked with transporting large sums of money. In 1865, he and his family had been on the east coast, and while returning to San Francisco on the Gold Rule, Smith was tasked with transporting a large amount of payroll funds to San Francisco. However, on the ship’s passage from New York to San Juan, it wrecked on the Roncador Reef near the Isthmus of Panama. Though no loss of life was suffered, the ship floundered for 11 days as the 700 passengers survived on supplies salvaged from the vessel. When two gunboats rescued them, the passengers were taken to Panama. In the mass confusion following the wreck, the strongbox containing the money mysteriously disappeared. Smith remained on the reef, endeavoring to salvage the chest containing the money. The tale continues that with the aid of a diver, the chest was recovered; however, the gold was missing. Though Smith accused the captain of the theft, many thought Smith himself had absconded with the money.

In the meantime, Smith’s family had crossed the Panama Canal by railroad and returned to San Francisco on the sailing ship America. Two weeks later, Smith followed, reaching San Francisco and transferring to the Brother Jonathan on July 28, 1865, for the trip to Port Angeles. Did the payroll funds from the east coast wind up at the bottom of the ocean near the Roncador Reef, or did it go with Smith when he finally made his way to San Francisco?

After transferring to Brother Jonathan, Smith was again accompanying a large amount of money – some $200,000 to pay the troops at Fort Vancouver, Walla Walla, and other posts in the Northwest. The ship was also thought to have been carrying crates of $20 gold pieces for transfer to Haskins and Company as well as Wells Fargo. A government Indian Agent for the Northwestern Region may have also brought gold coins on board for annual treaty payments to the tribes.

As the Brother Jonathan passed through the Golden Gate and headed north, they faced a strong headwind and heavy seas, which continually worsened during its journey. The next day, the ship pulled into the harbor at Crescent City to offload cargo. On her way again, the storm was building and the ship headed westward to avoid the rocks of St. George’s Reef.  As the storm continued to rage, Captain DeWolf decided to return to Crescent City, California, to wait out the storm.

However, on July 30, 1865, the ship hit a rock and began to break up. Many of the passengers loaded into lifeboats were immediately thrown out as the smaller boats capsized. In the end, of the 244 people on board, only 19 people survived in a damaged boat that hobbled into the Crescent City harbor. For weeks, bodies washed ashore, but of the gold and money on board, it was never found. Victor Smith was one of the casualties.

In 1866, the Customs Port of entry was returned to Port Townsend, among great rejoicing by the citizens.

John Tornow – The Wild Man of the Wynoochee