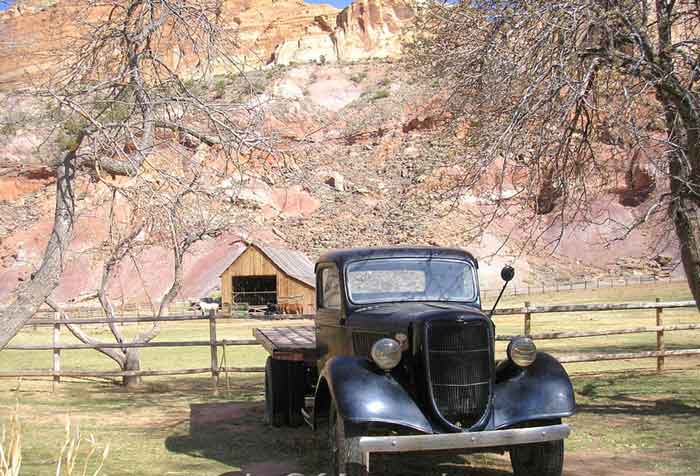 An old truck sits near a barn in Fruita, Utah. Photo by Kathy Alexander.

Situated in the Capitol Reef National Park is the old Mormon settlement of Fruita. Amazingly, this community, surrounded by thousands of square miles of desert and situated along the prone-to-flooding Fremont River, thrived in the late 1800s and early 1900s.

The settlement came late to south-central Utah as much of the region had not even been charted by credible explorers until 1872. However, in the last half of the century, the Mormons began establishing farming and grazing communities in the high plateau lands west of the Capitol Reef National Park. As they looked to form more communities, they moved eastward along the Fremont River.

In 1880, the Mormons established a small community at the junction of the Fremont River and Sulphur Creek, with the first landholder being a man named Niels Johnson. Soon, a few more families followed, and the small settlement became known as “Junction.”

The industrious families, utilizing the river for irrigation, began to plant several crops, including sorghum and alfalfa, but would become most famous for its many fruit orchards. Though it never comprised more than 300 acres, Fruita would become an important settlement due to its relatively long growing season and abundant water. The residents planted apple, peach, pear, cherry, and plum trees and walnut and almond orchards. Later they added grape orchards.

And, lucky for them, they were less subject to the frequent flooding of the Fremont River as were other small settlements further downriver, such as Aldrich, Caineville, and Blue Valley. 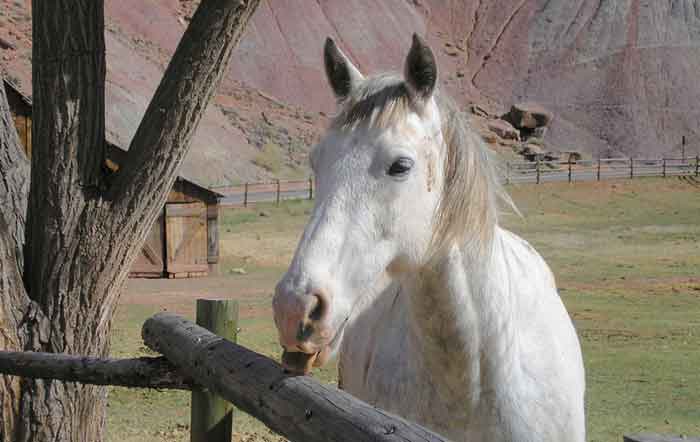 Kathy learned the hard way that this horse likes to nibble on people’s shoulders.

Surviving on their crops and vegetables until the fruit trees matured, the residents also made syrup and molasses from the sorghum. Living in a barter society, the community prospered by trading crops and products for items they couldn’t produce.

In 1884, the townspeople built a passage through Capitol Gorge that extended to Caineville and Hanksville. This 37-mile primitive and difficult roadway, called the “Blue Dugway,” amazingly continued to serve as the primary roadway until after World War II.

In 1896, the residents built a one-room schoolhouse that also served as a community center, where they held dances and socials. A couple of stores and a small lodge were later added.

Though a Mormon settlement, its early life also included a frontier mentality. While it never sported a saloon or a Wild West atmosphere like so many early towns in the west, it did tend to live on the fringe of the Mormon culture – sometimes harboring fugitives, never having a church, tolerating drinking, and even sporting a few moonshiners within its midst.

By the turn of the century, the small community numbered about ten families, and its abundant fruit became familiarly known as “the Eden of Wayne County.” A few years later, in 1902, the settlement’s name was changed from “Junction” to “Fruita.” The town was never incorporated. 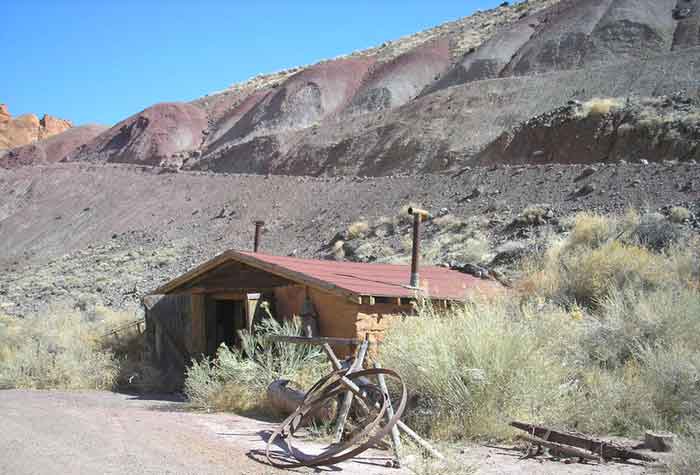 An old garage near Fruita, Utah, by Kathy Alexander

Fruit growers usually picked the fruit before maturation and hauled it by wagon load to bigger towns like Price and Richfield. As roads began to be developed through the area, some Fruita men worked with the state road crews, but annual fruit sales remained the primary source of revenue. 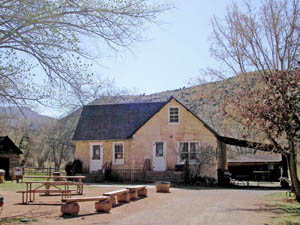 When the great depression hit the rest of the nation, Fruita, with its remoteness, remained unscathed, as its economy had long been based on barter rather than cash.

Manual farming techniques continued until well into the 20th century, as the first tractor wasn’t purchased until after World War II. The families continued their quiet existence in the lush valley of the Fremont River until 1937, when the Capitol Reef National Monument was established.

Though this didn’t initially affect the residents of the isolated community, it would eventually become a death knell for the community. After World War II, when people began to travel at a pace never known, numerous visitors began to move through the area. In 1940, a road was paved from Richfield to Torrey. In 1952, the pavement was extended to Fruita, and the settlement began to see people in numbers they had never experienced. Still unconcerned by its new National Monument status, several locals began to work for the Park Service.

However, in the 1950s, the government began aggressively purchasing any private lands within the monument’s boundaries. By 1959, the last resident was gone, and Fruita was merged entirely into the park. Unfortunately, many of the original buildings were razed.

Unlike many National Parks, a few buildings were kept, including the schoolhouse, the Gifford farm, the 1908 house and barn, a few outbuildings, and the orchards.

Today, the still-producing orchards dominate the landscape, though they are gradually being changed to centralize the fruit produced. The Gifford home now serves as a museum. The original site of the Niels homestead is now a picnic ground. 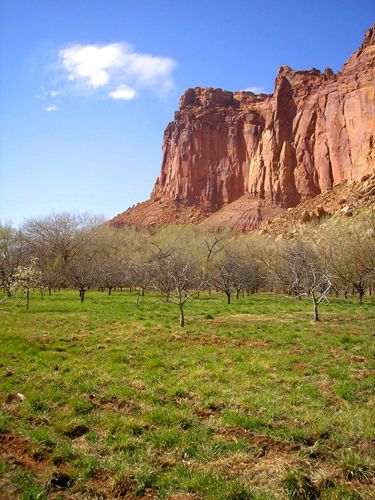 Near the old townsite of Fruita, the park provides an additional scenic drive (with a fee) that leads to overlooks, canyons, arches, and the site of the old wagon trail, which provides a peek at the Pioneer Register, where early travelers recorded their passage on the canyon walls. Also, in Capitol Gorge, petroglyphs left by the early Fremont Indians can be found. 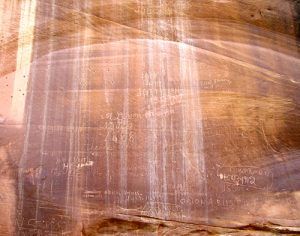