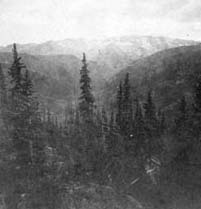 In the late 1700s a French expedition of 300 men and 450 horses journeyed from an outpost at present-day Leavenworth, Kansas on their way to the Rocky Mountains. Once they reached the mountains, they began to prospect, at first without success. Working their way south, they made camp several miles east of Wolf Creek Pass, near present-day Summitville.

Prospecting in the many creeks and streams of the area, they supposedly found a large amount of gold on Treasure Mountain. The amount of gold today would be valued at as much as $33 million dollars. The Frenchmen stored the gold in three different places and the commanding officer was in charge of the map.

When the French arrived, the Indians did not initially disturb them, but as time went on, the Indians mounted a brutal attack upon the expedition and a fevered battle ensued. Quickly, the French buried the gold and made new maps, but most of the Frenchmen were killed by the Indians. Only an estimated 17 to 35 men were able to flee the area, only to be attacked again, once they reached the Front Range. After this second brutal strike, only five weary men began the journey back to Kansas. However, winter was upon them, and starvation and bitter conditions killed three more, leaving only two who finally stumbled into the Kansas outpost. Even then, only one of the two survived. The sole survivor, a man by the name of “Le Blanc,” was the expedition’s historian. After recuperating at the outpost he made the long journey back to France, with two copies of the treasure map, one of which he gave to the French government, the other, he kept for himself. 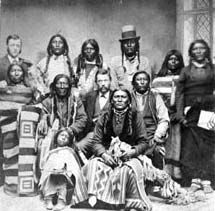 A second expedition was mounted to retrieve the buried treasure, though it is unclear whether the mission was conveyed by La Blanc’s family or by the French government. Fifty men headed back to the Summitville area, passing through Taos, New Mexico, where they hired a guide to lead them to the area.

However, months later, the guide returned to Taos alone, claiming the entire expedition had again been wiped out by the Indians. The Taos locals were suspicious of the “sole survivor” and in the last Mexican trial held in United States territory, they tried him for murder but he was acquitted. Some theories claim the whole story was contrived by the Frenchmen, who secretly found the gold and returned to France, paying the guide to return to Taos, New Mexico with the untrue story of a massacre.

Over the years, several maps have appeared which claim to lead to the buried treasure. A man by the name of William Yule supposedly had a copy of the original and searched the entire western side of the valley, north to Saguache, without success. Later, a prospector named Asa Poor supposedly obtained the map from Yule and with two partners, was able to locate several landmarks leading to the treasure, but never found the hidden gold.  One of Poor’s partners, named Montroy, retained possession of the map, but it disappeared several years later.

More recently, a local area family, who claims to be direct descendants of Le Blanc, professes to be in possession of an authentic map written in French. Supposedly, for three generations they have been quietly searching for the lost cache. After years of search, the family members claim to have located seven of the eight landmarks that are mentioned on the map.

Then, in 1993, one of the family members was hunting elk in the mountains south of Del Norte. When a cold hard rain began to fall, he took shelter in a 3-foot opening in the ground, which turned out to be a 5 by 4-foot wide man-made tunnel. Exploring the tunnel, he crawled about 20 feet into the hillside, when suddenly his path was blocked by an underground landslide. Shining his flashlight around the dark passageway, he observed a carving in the rock wall, which was supposedly the long-lost eighth clue. The following day, 20 of the family members returned to the passageway to excavate the cave-in, tunneling an additional twelve feet into the mountainside. Getting late in the day, the family lined the length of the passageway with candles but before they got a chance to light them a rattlesnake lunged out of the gloom at the end of the tunnel just barely missing one of the family members.

Frantically, he scrambled back to the entrance when a swarm of bats poured out from the hillside, squeaking and diving aggressively at the surprised party. Undaunted, they knelt down to light the first candle at the entrance to the tunnel when the candle at the far end of the tunnel inexplicably flared on by itself!

While the stunned group gaped at each other in horror, a huge owl dive-bombed the shocked party within inches of their heads. Terrified by these unusual events, the family fled the passageway and returned home.

Is the French gold “guarded” by an unknown entity? Something eerie happened that day. Though scared off that day, the family has since obtained the Colorado state treasure rights to legally enter the cave and claim whatever treasure may remain there.

Additional information also suggests that the Ute Indians may have acquired some of the French gold during the battle that occurred, hiding it near the mouth of the Rio Grande Canyon.