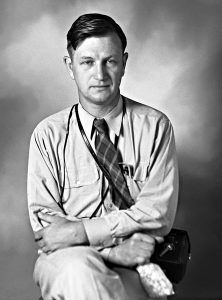 Russell Lee was a photographer and photojournalist who became a member of the team of photographers assembled for the federally sponsored Farm Security Administration (FSA) documentation project created as one of President Franklin Roosevelt’s New Deal programs.

Russell was born in Ottawa, Illinois, on July 21, 1903, to Burton and Adeline Werner Lee. He attended the Culver Military Academy in Culver, Indiana, for high school and went on to earn a degree in chemical engineering from Lehigh University in Bethlehem, Pennsylvania. Though he initially went to work as a chemist, he was obviously not happy in that role and soon gave up a chemist position to become a painter.

He got involved in photography to help with his painting but soon became more interested in photography for its own sake. In the fall of 1936, he became a member of the team of photographers assembled under Roy Stryker for the federally sponsored Farm Security Administration documentation project. Other team members included Dorothea Lange, Arthur Rothstein, and Walker Evans, who were tasked with documenting rural communities to make urban Americans aware of the plight of tenant farmers, sharecroppers, and migrant workers stricken by the Dust Bowl and the Great Depression. 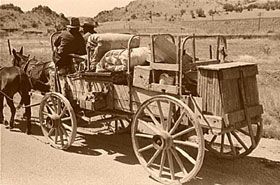 Lee was responsible for some of the FSA’s iconic images, including photographic studies of San Augustine, Texas in 1939, Pie Town, New Mexico in 1940, cowboys on the range, and numerous places that no longer exist today. During the 1940s, Lee’s distinctive work appeared in hundreds of newspapers and popular journals, including Life, Look, Fortune, U.S. Camera, and Survey Graphic.

Shortly after the United States entered World War II, the Historical Division transferred to the Office of War Information jurisdiction. At that time, Lee left the FSA group and joined the Air Transport Command as a captain in January 1943 and was assigned to take aerial surveillance photographs and document local conditions on the ground. When the war ended, Russell Lee resigned his commission and continued to work under Roy Stryker, producing public relations photographs for Standard Oil of New Jersey. 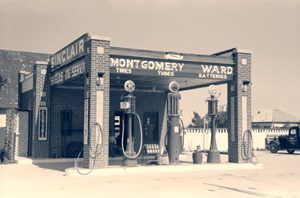 He died in Austin on August 28, 1986. An important collection of his work is at the Wittliff Collections, Texas State University. Some 80,000 of those photographs have also been donated by Exxon Corporation to the University of Louisville in Kentucky. Hundreds of more photographs can be seen at the Library of Congress.