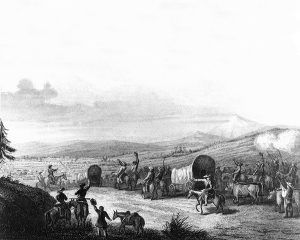 On September 9, 1867, Franz (Frank) Huning, an experienced Santa Fe Trail Merchant from Albuquerque, New Mexico, was traveling back home, returning from a trip to Dayton, Ohio. His small group, which consisted of seven wagons, a carriage, and an ambulance, was traveling with several drivers and his mother-in-law and 16-year-old brother-in-law.

In Junction City, Kansas, they were warned to hold up for a few days as several groups of Plains Indians were on the warpath. Other wagons and freight trains were gathered at the end of the railroad, planning to travel in a large group for protection.

However, Huning was impatient, and the small party soon set out alone. The group made their way south to the Santa Fe Trail and began to make their way to the southwest. 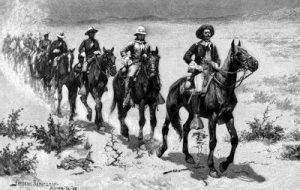 After traveling for another 45 miles, they came to the Little Arkansas River Crossing, where Huning found Captain Edward Byrne of the Tenth Cavalry leading a group of Buffalo Soldiers. By this time, the experienced teamster had second thoughts about traveling with such a small party and asked Byrne for a military escort. However, despite the fact that the troops were stationed there specifically for that purpose, Byrne refused as his soldiers were out on a picnic.

Once again, Huning bravely moved on alone. Wary now, he rode ahead of the freight train scouting for Indians. However, when his worst fears were realized, the alarm came from the back of the wagons when a teamster began yelling, “Indians, Indians!” Huning, hearing the cry, quickly turned around. While he had been riding ahead, several Kiowa, Arapaho, and Cheyenne warriors had sneaked up behind the wagons on foot.

Taking refuge from the third wagon from the front, Huning began to blast the Indians at the back of the train, but he was too late. The warriors stampeded the mules and pulled the four wagons at the back, the carriage, and the ambulance away from the rest of the group.

The other three wagons pulled ahead into a circle as they faced another wave of warriors astride horses and on foot. Oddly, they didn’t attack the group of three wagons. Instead, they turned their attention to the wagons they had already acquired and had moved several hundred yards from the trail. 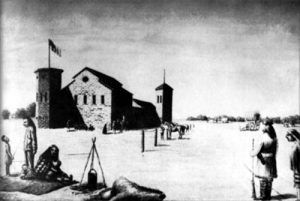 As Huning heard his mother-in-law’s screams as the Indians ravaged her, he continued to fire upon them until his rifle jammed. As he watched helplessly, the warriors plundered his goods, packed them onto the backs of his mules, and began to set the large items on fire. His mother-in-law’s cries of terror were finally silenced with a pistol shot. Huning then saddled a mule and quickly began to make his way to Fort Zarah, some 15 miles away.

Upon his arrival, there were no soldiers in camp, but two civilian scouts, Captain Charles Christy and a man named Roma set out with an ambulance to Plum Buttes. When they arrived, they found the scalped and mutilated body of one of the teamsters under a wagon and stuffed inside a featherbed, the mutilated bodies of Huning’s mother-in-law and brother-in-law, and the prairie littered with burned wagons and goods.

The scouts then loaded the three bodies into the ambulance and began the return trip to the fort. On their way back, they too were assailed by the warriors and were engaged in a four-mile chase. Fortunately, they were lucky enough to hold off the Indians until a large group of Fort Zarah soldiers quickly rode in, and the Indians fled.

Huning returned to the rest of his family in Albuquerque, New Mexico, where he continued as a successful merchant. He became the first person in the American West to complain, “Where’s the damn cavalry when you need them?” For years afterward, partly burned wagons, barrels, and broken dishes lay scattered in the area. Many historians believe that the attack was led by Charley Bent, the mixed-race renegade son of William Bent, and a group of Dog Soldiers.

The Massacre site is located about one mile west of “Ralph’s Ruts” in Rice County, about five miles west of Chase, Kansas, north of US Highway 56.